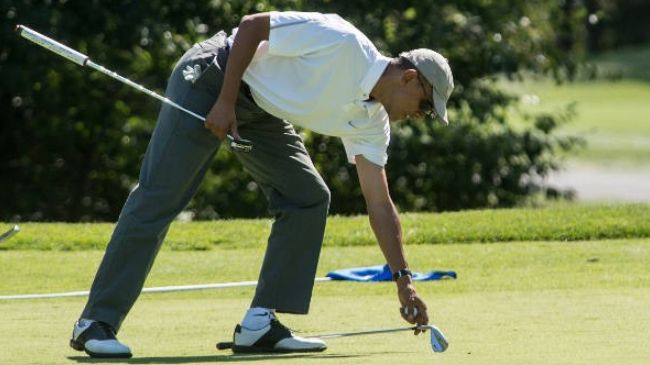 We promised ourselves not to post about ISIL’s latest antic, but we can’t help ourselves from posting Barry Soetoro’s antic either.

US President Barack Obama returned to the golf course shortly after declaring himself “heartbroken” by the brutal murder of American journalist James Foley at the hands of ISIL militants.

A grisly video posted online Tuesday and later confirmed as “authentic” by the White House shows ISIL militants decapitating James Foley in Syria.
Obama spoke to Foley’s parents Wednesday and told them “we are all heartbroken at their loss and join them in honoring Jim and all that he did.”
Hours after the phone call, the US president addressed the world on the horrific incident and vowed that the United States would eradicate the “cancer” of ISIL.
But as soon as the cameras went off, Obama headed to his favorite golf course on Martha’s Vineyard where he is on vacation, drawing criticism over what many said was a callous indifference to the terror act he had just denounced, according to The New York Times.
The president planned to play golf with former Miami Heat star Alonzo Mourning, private equity investor Glenn Hutchins, and longtime friend Cy Walker‎, according to the White House.
Obama briefly flew back to Washington Sunday night for meetings at the White House, focusing on US airstrikes on Iraq and the ongoing unrest in Ferguson, Mo. but returned on Tuesday to his vacation home on the Massachusetts island.
Obama played his 192nd round of golf as US president amid crises in Iraq, Gaza, Ukraine and Ferguson, Mo.
HRJ/HRJ
source »