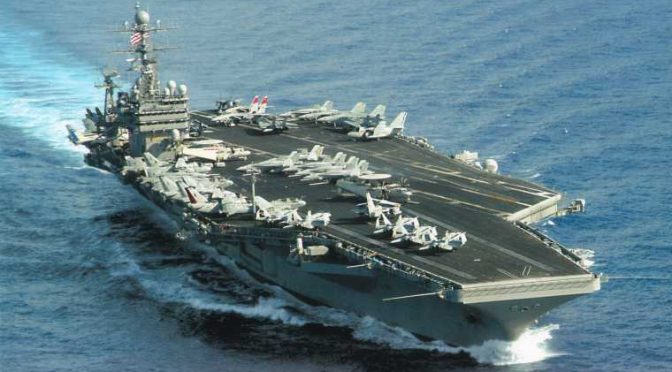 That’s the problem with a known bully, i.e. when the bluff is called it gets angry.
It’s global knowledge that the Corporate US is trying to encircle all its perceived enemies with military bases, and then use those bases as a reason for subsequent reconnaissance flights over adjacent airspace.

In case of Iran it even tried to dictate how to design the former’s entire defense structure defeating the very essence of having such mechanism to protect its sovereignty.
We have to admire Iranians’ resolve for independence from the central bankers.
[youtube=https://www.youtube.com/watch?v=zv6dkrqPyiI]
The United States’ constant provocation is an exercise in futility, further isolating  itself from the rest of the peace loving nations on the planet.
And as ridiculous as it is, up to now, it still believes that it can intimidate Asia.

Second US aircraft carrier sent to China amid seething tension

Washington, Aug 25 (ANI): The United States Navy is reportedly sending a second aircraft carrier strike group to the Asia Pacific region following a dangerous aerial intercept between a Chinese jet and one of its P-8 surveillance craft.

The U.S. navy said that the strike group, led by the USS Carl Vinson, left San Diego for the Pacific on Friday as part of a “planned” deployment.
While Chinese Defense Spokesperson Yang Yujun maintained that the Chinese interceptor was just making a “regular identification and verification” of the Navy P-8 aircraft, Pentagon termed it “a dangerous and unprofessional encounter,” reported The Washington Free Beacon.
The encounter took place 135 miles east of Hainan Island.
Pentagon spokesman Rear Adm. John Kirby said on Friday that the Chinese J-11, a Russian design Su-27, flew directly under the U.S. aircraft and then passed the nose of the P-8 at 90 degrees with its belly showing the weapons loadout.
Yang however, termed Pentagon’s criticism of the encounter totally groundless and said that the Chinese pilot maintained a safe distance and conducted the identification professionally.
The U.S. military has protested the incident to the Chinese military, said Kirby.
Meanwhile, China’s military demanded the U.S. to put a stop to all the monitoring flights. (ANI)
source »