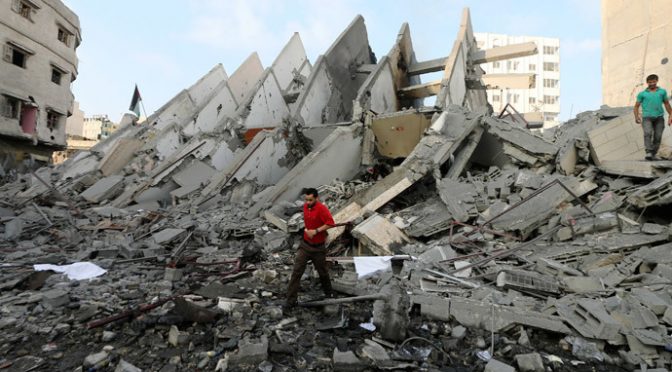 Finally, Israel bows down to mounting international pressure.
This another point for the Global Resistance score card.
Through the help of Egypt, Israel was able to obtain a “face-saving” cessation of its hostile conduct against the militarily inferior Gazans.
Of course, this doesn’t mean we just forgive and forget the mayhem that just happened. No.
More than 2,137 Palestinians, including around 570 children, have been killed so far in the Israeli onslaught on Gaza. Some 11,000 others have been wounded,  over the last 50 days.
We should not let the monsters go unpunished.

Published time: August 26, 2014 13:46
Edited time: August 26, 2014 16:29
A long-term truce in Gaza has been agreed with Israel, Palestine President Mahmoud Abbas said. The ceasefire announced by Egypt came into force at 16:00 GMT with almost immediate reports of warning sirens going off in southern Israel.
“We have responded to the Egyptian proposal for a complete and comprehensive cease-fire, which starts at 19:00 Cairo time,” Palestinian President, Mahmoud Abbas, stated. “There will be a complete stop in fighting,” Abbas told reporters.
A senior Israeli official confirmed to Reuters that Israel had accepted an Egyptian proposal for a Gaza ceasefire.
“Israel has accepted an Egyptian proposal for a complete and unlimited-in-time ceasefire. Israel accepted already the Egyptian proposal on July 15. Israel has always supported an unconditional, open-ended ceasefire,” the anonymous official told the agency. Shortly after the ceasefire was scheduled to take effect, however, sirens indicating rocket attacks continued to be heard in southern Israel.
READ MORE: Holocaust survivors pen open letter condemning Israel’s Gaza war
Egypt’s Foreign Ministry issued a statement saying that indirect talks are set to continue within the space of a month.
An anonymous Palestinian official also told AFP that the contacts working on the issue in Egypt’s capital “agreed a permanent cease-fire, a [deal to] end the blockade and a guarantee that Gaza’s demands and needs will be met.”
Tel Aviv has reportedly agreed to bring its blockade of Gaza to a halt in order to allow relief supplies and construction materials through. Discussions on more pressing issues the peace negotiations have been centered around, such as the potential establishment of a seaport and an airport in the Gaza strip, will begin in a month, a senior Hamas official told AP.
continue reading » 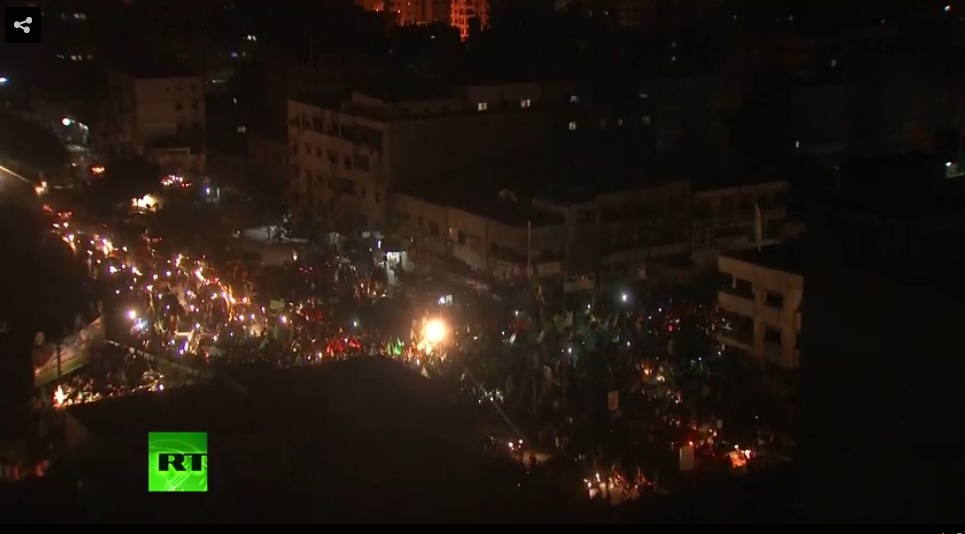 Meanwhile, Israel is yet to inform its people about the details of the ceasefire…

Israel does not confirm Hamas ceasefire claim as of Tuesday night

DEBKAfileAugust 26, 2014, 5:30 PM (IDT)
Jerusalem has not commented on the claim by Hamas and Islamic Jihad officials fighting in Gaza of a deal with Israel to end their 50-day war. Egypt plans an announcement at 6 pm, followed an hour later by a possible statement by Palestinian leader Mahmoud Abbas. DEBKAfile: In the course of the Gaza campaign, truces have repeatedly fallen by the wayside before implementation, or else they were violated by Palestinian terrorist groups before they took hold. Israel is therefore treating the Palestinian announcements with extreme caution.
source »

Prime Minister Binyamin Netanyahu and Egyptian President Abdel-Fatteh El-Sisi were able to bring Hamas leaders in the Gaza Strip to accept an unlimited ceasefire in hostilities in effect from 7 p.m. Tuesday, Aug. 26, based on the 2012 deal. Netanyahu did not ask for his ministers’ endorsement, knowing he did not have majority support in the cabinet. Hamas violated all eleven agreed during during the 50-day Gaza conflict.
Up to the last minute, Hamas kept up heavy rocket and mortar fire, causing one Israeli death and injuring seven people, three seriously, in an Eshkol District kibbutz. It is too soon to tell whether Hamas will honor the deal during the month’s run-up to negotiations on a durable truce accord to be brokered by Egypt.
There is no certainty that Israel and Hamas deal were not presented with different drafts for approval by Egypt, which will require nimble footwork from Cairo diplomats to bridge at some point, or that Operation Defensive Edge is indeed over.
continue reading »