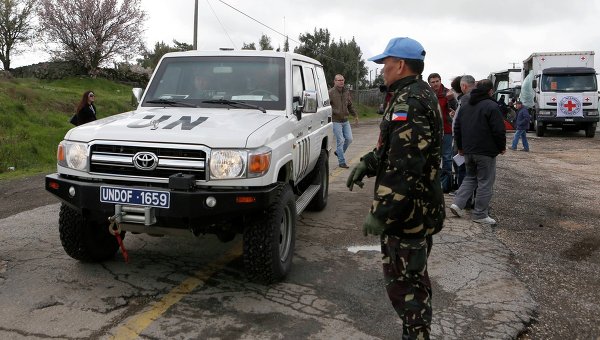 MOSCOW, August 31 (RIA Novosti) -All Filipino peacekeepers who were trapped by Syrian militants on Golan heights, managed to escape, The Associated Press reported Sunday, citing the Philippine military chief Gregorio Pio Catapang.
“We may call it the greatest escape,” said General Gregorio Pio Catapang, as quoted by the agency.
According to Catapang, a group of 40 Filipino peacekeepers surrounded by more than 100 gunmen held their ground for seven hours before managing to flee from the Rwihana encampment under the cover of darkness.
Earlier this week, a group of militants, presumably of a Syrian origin, captured more than 40 peacekeepers from Fiji and restricted 72 peacekeepers from the Philippines in the disputed region of Golan Heights. On Saturday, the first group of 35 Filipino peacekeepers were evacuated by an Irish UN peacekeeper battalion.
The United Nations Disengagement Forces (UNDOF) peacekeeping mission on Golan Heights has been monitoring a 1974 ceasefire between Israel and Syria following the war of 1973.
Currently the mission consists of 1223 troops from Fiji, India, Ireland, Nepal, Netherlands and the Philippines.
source »
Please support us by downloading our Towards Healthcare Emancipation – Premium Edition, a fully illustrated eBook about how you can implement a low cost but extensive and decisively effective healthcare system in the comfort of your own home.
With this eBook you can easily defeat cancer, AIDS and all other parasitic diseases for good. Find out more about it here. The proceeds from this book will be used to fund our next project, Towards Energy Emancipation. The aim is to make the subject of free energy more understandable for the layman so that anybody could replicate and install his own power plant and be completely living off-grid.
If you haven’t done so, please like our FB page to encourage others to learn more about our work. Thank you very much for your valuable support.

One thought on “All Filipino Peacekeepers Escape Golan Heights”