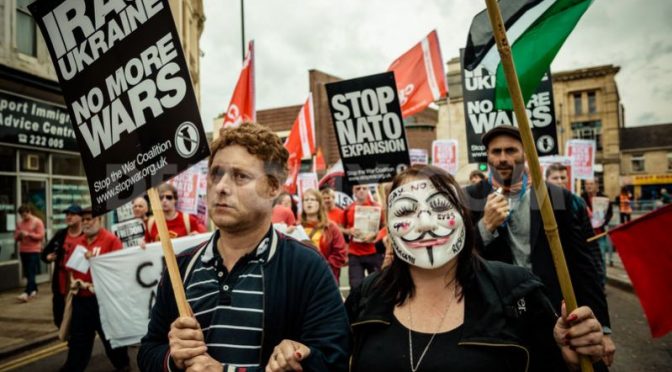 Different strokes for different folks.
Those who find time to  voice their concerns on global issues have submitted their warm bodies in Wales as 60 puppets are having a meet-up on how to deal with “Russian Invasion”.
Others are just ignoring their presence. This is their way of protesting against an increasingly irrelevant entity that has sown more wars in their names.

Behind the steel fences and under the watchful eyes of armed police officers and secret service personnel, staff at the Celtic Manor Resort were applying the finishing touches to the venue as they prepared for the arrival of more than 60 world leaders, their entourages and a large chunk of the world’s media.
Half a mile – and what felt like a world – away at the grey shopping precinct on the Ringland estate, Roma McIlroy was stacking the shelves of her fruit and veg shop, none too impressed that a Nato summit is about to begin on her doorstep.
“What’s happening on that hill over there is nothing to do with us,” she said. “It’s just causing disruption and worry. I can’t think that Obama will be coming anywhere near here. It won’t bring any good.”
Next door, butcher Shaun Haggerty agreed. “It’s like the Ryder Cup [the international golf competition that Celtic Manor hosted in 2010]. They claimed it would put us on the map, be a boost for business. But people forget about us as soon as the show moves on.”
Though most residents of Newport do not appear too excited about what is happening at the pristine hillside resort, it is impossible for them to avoid its impact. For a start, Newport is crawling with police, many wearing distinctive light blue caps and a good few heavily armed. As part of a security operation costing an estimated £50m, almost 10,000 officers from forces across the UK have been drafted in to prevent attacks by terrorists or protesters.
They guard all approaches to the venues that will host the leaders and the delegates. Every motorway bridge from the Severn Bridge is covered. They patrol on foot, horseback, by bicycle, in helicopters, cars, vans and motorcycles.It is also impossible to miss the presence of the military. Trucks full of British soldiers are buzzing around while US marine corps helicopters have been flying above Cardiff Castle, where Barack Obama is due to take part in a working dinner behind a hefty ring of steel that has been erected in the Welsh capital. Nato warships have begun arriving in Cardiff bay.
The devolved government in Cardiff is convinced that hosting the Nato summit – and the presence of a serving US president on Welsh soil for the first time – will be a fillip for the country.