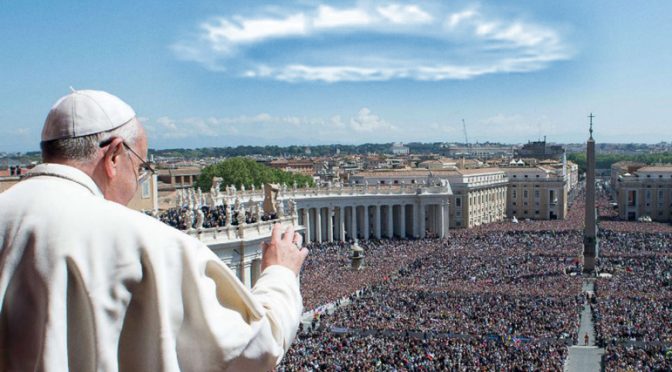 How can religion be kept relevant in the Age of Universal Enlightenment?
It seems the sinister forces within the Vatican has the answer… 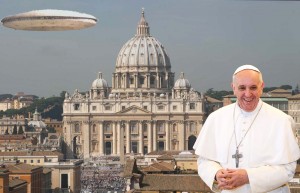 Ubanell reports that details have yet to be officially announced but that the Vatican’s interest in extraterrestrial life is well documented through recent astrobiology conferences the Vatican Observatory has sponsored or participated in. Father Guy Consolmagno, a Jesuit astronomer and one of the leading Catholic proponents for preparing for the scientific discovery of extraterrestrial life, on July 18, won the Carl Sagan science medal from the American Astronomical Society. Pope Francis, a fellow Jesuit, regularly consults with Consolmagno and other leading Vatican astronomers about scientific issues. It is likely that Pope Francis is preparing an “Urbi et Orbi” speech – Latin for “to the city [of Rome] and the world” – about First Contact with extraterrestrial life.

The Vatican’s scientific interest in extraterrestrial life was publicly revealed for the first time in May 2008 when the head of the Vatican Observatory, Fr Gabriel Funes, also a Jesuit, gave an interview to the Vatican newspaper, L’Osservatore Romano. Funes made a series of startling statements about how extraterrestrial life is likely to be more ethically evolved than humans, and can be welcomed as brothers. In his interview, which was titled “The extraterrestrial is my brother,” Funes said that intelligent extraterrestrial life may not have experienced a ‘fall’, and may be “free from Original Sin … [remaining] in full friendship with their creator.” This makes it possible to regard them as ‘our brothers’ as Funes explained:

Just as there is a multiplicity of creatures on earth, there can be other beings, even intelligent, created by God. This is not in contrast with our faith because we can’t put limits on God’s creative freedom… “Why can’t we speak of a ‘brother extraterrestrial’? It would still be part of creation…

Most importantly, Funes’ statement makes possible the idea that Christianity can be exported to extraterrestrial worlds that have not experienced a ‘fall’ and are free from original sin.

Just over a year after his interview, Funes was the organizer of the first ever Astrobiology Symposium held by Pontifical Academy of Sciences in November 2009. Consolmagno and Funes have ever since played leading roles for the Vatican Observatory in presenting a theological perspective on the discovery of extraterrestrial life. Most importantly, both have been leading advisors to Pope Francis about scientific issues concerning the discovery of extraterrestrial life.

What is likely to be the content of Pope Francis’ upcoming statement or possible “Urbi et Orbi” speech about alien life? An important clue is a forthcoming presentation by Fr. Consolmagno at a September 18-19, 2014, astrobiology symposium organized by NASA and the Library of Congress that is titled: “Preparing for Discovery: A Rational Approach to the Implications of Finding Microbial, Complex or Intelligent Life Beyond Earth.”

Consolmagno is a featured presenter and will discuss the theological implications of discovering alien life. His topic, “Would You Baptize an Extraterrestrial?” suggests that Pope Francis agrees that extraterrestrials are capable of the higher ethics involved in understanding the Christian message and becoming Christians.

Not all will welcome a statement from Pope Francis advocating extraterrestrials as brothers and worthy of being baptized into the Christian faith. According to Chris Putnam and Tom Horn, authors of Exovaticana, Pope Francis I is preparing to lead the Catholic Church to embrace aliens as “brothers in Christ” – reflective of the 1950s and 1960s contactee reports of benevolent “space brothers.” Putnam’s and Horn’s Exovaticana portends a future religious war between those accepting extraterrestrials as “brothers in Christ” and those believing them to be returning demons about to enslave us. Despite the extensive scholarship found in Exovaticana, it unfortunately skews data towards an overly negative assessment of the motivations of extraterrestrial visitors. Thankfully, the Vatican’s evolving public position, as reflected by statements from its leading astronomers, shows a far more enlightened stance on how to consider the discovery of alien life from a theological perspective. A statement or “Urbi et Orbi” speech from Pope Francis expounding on various themes associated with the view that extraterrestrials are potential “brothers in Christ’ is a welcome position to take on a controversial issue with major world significance.

© Copyright 2014. Michael E. Salla, Ph.D.
Please support us by downloading our Towards Healthcare Emancipation – Premium Edition, a fully illustrated eBook about how you can implement a low cost but extensive and decisively effective healthcare system in the comfort of your own home.
With this eBook you can easily defeat cancer, AIDS and all other parasitic diseases for good. Find out more about it here. The proceeds from this book will be used to fund our next project, Towards Energy Emancipation. The aim is to make the subject of free energy more understandable for the layman so that anybody could replicate and install his own power plant and be completely living off-grid.
If you haven’t done so, please like our FB page to encourage others to learn more about our work. You can also flattr us by clicking on the Flattr button below.
Thank you very much for your valuable support.

One thought on “Vatican Preparing Statement on Extraterrestrial Life”