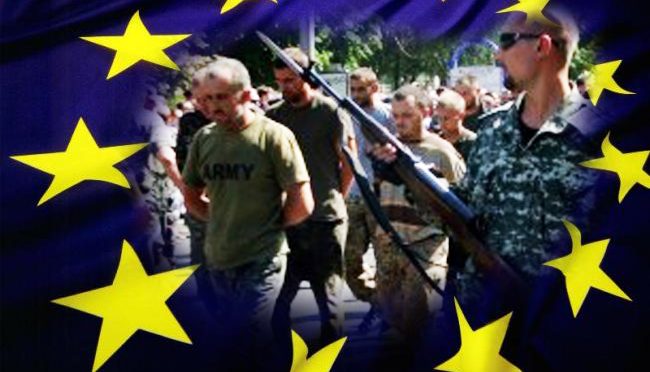 Here’s a good summary about what is truly happening in Ukraine that Western media hate to discuss about, and how the Cabal is trying hard to exploit it with all stupidity, and to their disadvantage.

EU going for broke on Ukraine

I have been waiting for the EU meeting in Brussels to wrap up to write this and catch any last minute surprises. There had been enough of those during the day. As the Ukraine coup begins to unravel the scramble will be on to find scapegoats to pin the blame on, and of course Russia is the target of choice.
On Friday, the EU foreign ministers reported that new Russian sanctions had been drafted to be ready to pull the trigger on.
That seemed an orchestrated event in response to another one, the umpteenth charge of a new Russian invasion, with the curiously round figure of 1,000 “regular” Russian troops involved…kind of a giveaway that they had picked the number out of thin air. With NATO as the source, you know that is what they did.
What this showed me was the Minsk meeting was a Western fraud. All the platitudes mentioned in the warm-up to the meeting, like there was “no ‘military only’ solution to the crisis” and “negotiations would eventually be needed” were a cheap hustle to send the message out to the world that a ceasefire would be discussed at Minsk as a prelude to getting negotiations started. But that did not happen.
The West tried to bait Putin into negotiating for the breakaway republics, which he has no standing to do, so he passed on handing the EU his head on a platter. He would not be manipulated, so they stiffed him and the republics on even setting a date to discuss a ceasefire — a really irresponsible move and one they may eventually regret.

It was well known that the “anti-terror” offensive was petering out despite Kiev trying to undermine the opposition leadership by making war on the civilians to punish them for the self-defense forces’ resistance. Both the US and EU have endorsed the slaughter of the civilians through indiscriminate GRAD rocket and artillery fire by exerting no pressure whatsoever to stop it.
Unfortunately, the Israelis set a bad example in Gaza by exhibiting how good they were at collective punishment and getting away with it when you have the US as your protector and paying for it all.

Poroshenko had anticipated a collapse of the Republics’ resistance in time for the Victory Day parade, but he got “rebel rain” instead.
Kiev’s encirclement plans did not work out, as the flanking units were expecting clear sailing with the Republic Defense forces tied down defending Donetsk and Lugansk, each with a million population.
But the Republics split their forces to send enough east and south to intercept the flanking forces, block them, cut off their supplies and surround them into submission. These units were being eliminated and their captured equipment of heavy weapons made the defense forces that much stronger.
We have all read about the steady stream of Ukrainian troops crossing over to Russia to get out of the fighting. This week came the news of entire battalions deserting, refusing to be cannon fodder to give Poroshenko a stronger negotiating position at some future settlement. What we can see now is that the only negotiation and ceasefire he was interested in was one after a military victory over the East.

If this was not enough bad news for Kiev, after they showed they had no intention in a ceasefire at Minsk, the Republic Forces launched their major counterattack against larger Ukraine forces, who thought their numbers insulated them from attack. They were wrong.

Several thousand in the southeast are starting to surrender and take the safe passage option to Russia. This was requested by Putin — another diplomatic coup — and quickly agreed to by the defense forces, despite Kiev having ordered them to fight to the death and not surrender.

The anti-war public held large protests in Kiev last week, calling for the resignation of Poroshenko and the defense minister for incompetent handling of the war.
We also have gotten reports of wives and mothers of Ukrainian soldiers lying down on the roads in front of convoys to block them…all bad news for the Western military advisers.
They don’t seem to have been much help despite all the outside contractors that magically appeared fighting with Kiev, the paid mercenaries.
Western media has been censoring them out of their reports. The republic forces had some of their thousands of foreign volunteers doing interviews this week, fighting for free. NATO has lied to us about these fighters being regular Russian troops.
As expected, the Ukrainian army reverses were attributed to the Russian army invasion, for which the only proof offered was that only Russian regulars could be defeating the Ukraine army. They forgot they were already on the record for admitting that the whole E. Ukraine offensive had been mishandled badly.
But among the thousands of photos and videos of everything on the war, for some reason, none of them ever included the mysterious invisible Russian troops other than the tired and hungry nine paratroopers who wandered over the border.

Even the energy card was put in play this week with the EU making a public showing that they want to get the gas pipelines flowing before a winter debacle descends upon the Kiev coup-meisters. The coup-meisters are demanding to set their own price and pay when it suits them. You just can’t make this stuff up.

We see today that the conciliatory statements were all just staging. Poland’s president, Donald Tusk, was voted in as president of the EU council — the same Poland that has been putting weapons and troops into Ukraine via Odessa, something in serious violation of NATO membership rules. I doubt we will be seeing an investigation on that anytime soon.
Kiev is begging for NATO funding, troops… everything that it can to save itself. They have already been getting lots of help, but unofficially.
NATO is taking advantage of the situation to increase its basing system in the East, and the struggling economies there seem to be tripping over each other for the anticipated extra cash flow that comes with Western military spending of the taxpayers’ borrowed money.
But the EU showed its hand late in the day with the incredible threat of holding Russia responsible for any further military gains by the republic defense forces. This is their plan to mask Kiev’s failure of their military option to crush those who refused to live under the boot of a violent coup.
The coup was supported and funded by the West at the expense of these poor Ukrainians, who already had a tough economic situation.

My instincts smell a big shakedown attempt being planned for Russia now. The West — whom we suspect to be complicit in the murder of the MH17 passengers in a failed attempt to blame it on Russia — is going to blame the latest debacle on Moscow anyway. Have you noticed how quickly the plane shoot-down news has disappeared? Remember that Kiev has still refused to turn over its air traffic control tapes, and there has been no outcry from the West for them to do it.

The EU’s response to Putin’s telling them that they had to negotiate with the Republics was to put new sanction threats on the table, with a next week expiration date. Isn’t that special? Of course, the Euros are waiting now to get the NATO meeting finished, so it can add in its threats.
Expect a replay of the bogus Iran nuclear weapons program scam, where they made the charges for year after year without ever presenting any proof, and in spite of all the IAEA inspections. Lying to the public carries no stigma whatsoever anymore.

Catherine Ashton was trotting out a joint East-West deal on Ukraine trade as a thin veil of cover for claims the West was taking over Ukraine.
But of course, what Ashton meant for Russia was to keep buying East Ukraine exports plus keep all the huge subsidies going, the first of which would be to turn the gas on with “we will pay you later” terms.
By holding the sanctions gun to Moscow’s head, launching NATO’s 10,000-man ready reaction force which will take a year to organize, plus all the Russian speaking E. Ukrainian hostages, the West thinks it has a deal that Putin can’t refuse.
“If you want them, you have to pay…one way or the other…or we will trigger the new sanctions on you.”
If the EU is stupid enough to do that, its vehicle manufacturing industry will have a have a dreary Christmas as the Russians also have their counter sanctions ready to go–and with the EU economic reports showing their stagnant economies sliding further into recession.
source »
Please support us by downloading our Towards Healthcare Emancipation – Premium Edition, a fully illustrated eBook about how you can implement a low cost but extensive and decisively effective healthcare system in the comfort of your own home.
With this eBook you can easily defeat cancer, AIDS and all other parasitic diseases for good. Find out more about it here. The proceeds from this book will be used to fund our next project, Towards Energy Emancipation. The aim is to make the subject of free energy more understandable for the layman so that anybody could replicate and install his own power plant and be completely living off-grid.
If you haven’t done so, please like our FB page to encourage others to learn more about our work. You can also flattr us by clicking on the Flattr button below.
Thank you very much for your valuable support.