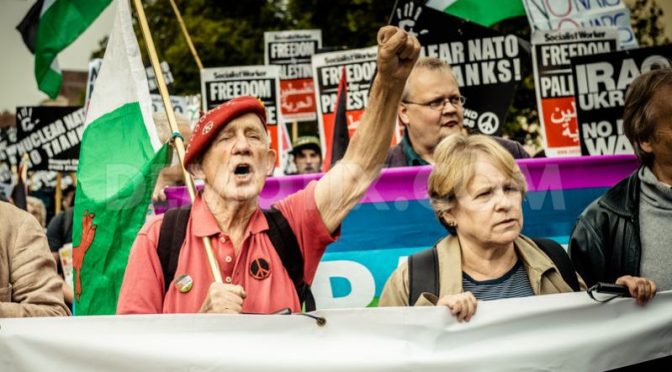 All military installations, industries and personnel should be. This is the desire of the majority.
There’s absolutely no need for armies to preserve or expand boundaries. There’s enough for everyone and more.
And If there’s indeed democracy all over this planet then why is the voice of the majority of its people not being respected?
It is therefore our duty to uphold human dignity by going against the will of any state that is not in the service of its people.

NATO Should Be Retired, Not Repurposed!

March and rally in Newport, Wales, where much of the NATO summit is being held. (Photo: Joseph Gerson)
Joseph Gerson delivered this speech at the NATO Counter Summit in Wales on August 31, 2014.
Friends,
As I left Boston, my 7-year-old grandson who I’m helping to raise complained, “Why does grandpa have to travel again?” My answer was that I was going to help prevent wars, which he knows are awful. That’s why we’ve all come here. It’s time to end NATO and its militarism and to demand that it be retired, not repurposed.
You should be proud of the roles that Campaign for Nuclear Disarmament (CND) and British peace and antiwar movements have played in opposing NATO, now a global military alliance, in blocking Obama’s plans to attack Syria last year, and for your leading roles in the struggle to eliminate the world’s nuclear arsenals and to save humanity from itself. The campaign to stop Trident is one of the brightest hopes in the world’s nuclear weapons abolition movement.
Friends, the Ukraine war reminds us that NATO is a nuclear alliance, that the dangers of a catastrophic nuclear exchange didn’t disappear with the end of the Cold War. Despite growing calls for the withdrawal of US tactical nuclear weapons from Europe, last week in the pages of The Washington Post, elders of the US establishment urged that the summit reaffirm NATO as a nuclear alliance, ostensibly to deter Moscow’s adventurism.
They ignore Russian memories of the catastrophic Napoleonic and German invasions, all from the West and across Ukraine. And, they’ve either forgotten or never learned the lessons of Common Security that led to the end of the Cold War. Clearly, the path to peace includes Ukraine becoming a neutral nation, like Austria during the Cold War, with considerable regional autonomy.
In the tradition of US exceptionalism, they argue that the US is a benign power that is simply defending European security. In fact, NATO’s expansion to Russia’s borders, US and EU aggressive policies in Ukraine, Washington’s overwhelming superiority in so-called “conventional” weaponry, and US efforts to monopolize the militarization of space led to Moscow’s seizure of Crimea and to Russia’s increased and very dangerous reliance on its nuclear arsenal.
C. Wright Mills would have called this “crackpot realism.”
Friends, during the last years of the Cold War, millions of people were moved to action by scientific analyses demonstrating that a US-Soviet nuclear exchange would bring on nuclear winter, ending all life as we know it.
We underestimated the danger. We now know that the detonation of as few as 100 nuclear weapons would cause global cooling so severe that the resulting famine would kill up to 2 billion people. Two billion people!
Anyone ready for a “limited” nuclear war in Europe? Between India and Pakistan?
Remember too that the world is still freighted with more than 16,000 nuclear warheads – more than 90 percent in the US and Russian arsenals.
In the early stages of the Ukraine war, both the US and Russia conducted nuclear war exercises. And, Daniel Ellsberg, best known for revealing the secret history of the Vietnam War, was a senior nuclear war planner for three US presidents, is certain that US and Russian nuclear forces have been on high alert during the Ukraine crisis.(1) The Ukraine war should be a powerful warning that, given the history of nuclear miscalculations and accidents and the dangerous dynamics of nationalism, we should again be working for the elimination of nuclear dangers as if our lives depended on it . . . Because they do! Nuclear war may be more likely today than during much of the Cold War.
NATO and its nuclear war preparations are a good place to begin disarmament.
We’re told that US and NATO nuclear weapons are designed and deployed for deterrence despite repeated threats and preparations to initiate nuclear attacks during international crisis and wars. The Pentagon has been clear, stating that deterrence “has never been our doctrine.”(2) And, despite Obama’s pledge in Prague, first-strike nuclear attacks still play significant roles in US military doctrines.
Since they were first deployed in Europe, US and NATO nuclear weapons have been about rather more than classical deterrence. One of the primary purposes is to prevent Europe’s “decoupling” from the United States, which would lose the US its western toehold in Eurasia, the geopolitical key to global dominance. It was to prevent Europe from going its own way that NATO’s Nuclear Planning Group was created, and it helps to explain why the US is now spending billions of dollars to “modernize” its B-61 warheads.
But these omnicidal weapons also serve a larger purpose. As President Carter’s Secretary of [Defense] Harold Brown testified, with nuclear weapons as the core of US security systems, its conventional forces became “meaningful instruments of military and political power.”
US nuclear weapons in Europe were essential to US preparations for and threats to initiate nuclear war, not only during the Berlin crises of 1948 and ’61, but also to reinforce US hegemony over the oil-rich Middle East and beyond. Such threats and/or preparations were made during the Suez Crisis in 1956, the Marine incursion into Lebanon and the revolution in Iraq in 1958, and the Cuban missile crisis, in which the US threatened human existence in order to enforce the principle that the US could deploy nuclear weapons – even obsolete nuclear weapons – in Turkey on the Soviet Union’s periphery, but that Moscow could not do likewise in Cuba. And, nuclear threats were made during the 1967 Middle East war, and after the Cold War during the Iraq wars of 1991 and 2003. As we meet, the “all options” nuclear threat against Iran remains “on the table.”
continue reading »

Published time: September 06, 2014 21:23
Edited time: September 07, 2014 00:13
As seven-day NATO military exercises continue to take place in Latvia, the organization says the drills are aimed at showing its commitment to Baltic member states in the face of an “assertive” Russia.
READ MORE: At least 4,000 troops: NATO approves new E. Europe-based spearhead force
Exercise Steadfast Javelin 2, which kicked off on September 2, simulates the deployment of NATO soldiers and equipment during a crisis situation. A total of around 2,000 soldiers from nine different countries are taking part in the maneuvers, which will carry on until Monday.
On Friday night, around 500 paratroopers landed at Lielvarde airport, located about 60 km from Latvia’s capital, Riga.
“We want to assure our people that we are able to protect them. Certainly on top of this we send a clear message to everyone who wants to threaten NATO, that it’s not a thing you should do. NATO will always defend and protect its people,” General Hans-Lothar Domrose, commander of the NATO military command in Brunssum, Netherlands, told reporters.

The exercises in Latvia will be followed by other drills in Germany, Norway, Ukraine, and Poland later this autumn.
Steadfast Javelin 2 was reinforced by a NATO summit in Wales, where the bloc officially announced it was creating a new rapid reaction force. The spearhead of any such force would consist of 4,000-5,000 troops who would be able to deploy to any NATO member country within 48 hours.
“It needs to be a relatively light force. It needs to be a force that succeeds, builds upon intelligence and agility, and precision as opposed to weight of military force. It is an agile, precise, intelligence-led rapidly deployable force,” Lieutenant General Ed Davis, NATO deputy land commander, told Reuters.

Published time: September 06, 2014 10:37
Edited time: September 06, 2014 19:35
Ukrainian President Petro Poroshenko has announced ceasefires before and was always the first to violate them, Spanish volunteer Ramiro Gomez, who fought in eastern Ukraine against the troops of the coup-imposed Kiev government, told RT.
According to the European volunteer, this ceasefire is in effect a part of Poroshenko’s strategy: “to reorganize the [Ukrainian] army which is already a large number, before a general counteroffensive by Lugansk and Donetsk [forces],” Ramiro Gomez told RT.
“They [Ukrainian forces] look sort of kicked out to the sidelines of the game,” he said, adding he personally has little expectations of a successful ceasefire.