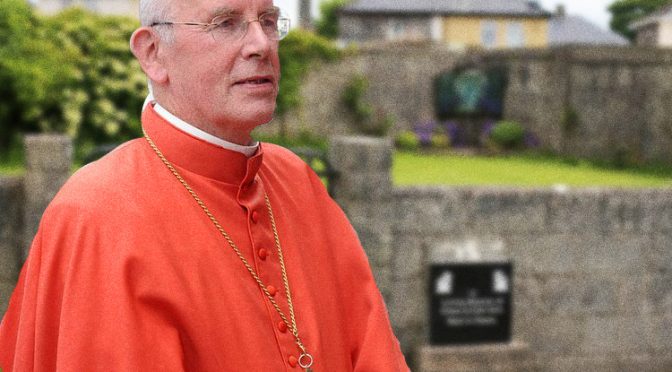 The top Catholic official in Ireland has tendered his resignation after his alleged cover up on mass killing involving close to 800 babies was exposed recently.

Dublin, September 9, 2014: Cardinal Sean Brady offered his resignation today after it was recently revealed that he forced an 11 year old rape victim to sign a statement denying that he was molested and assaulted by catholic priests. This exposure of Brady happened recently on Sean Maguire’s blog radio program featuring ITCCS spokesman Kevin Annett and eyewitnesses to Brady’s action.

In related news, the ITCCS and its common law courts are convening a public inquiry this month into Cardinal Brady’s attempted cover up of the mass killing of newborn babies at a catholic home in Tuam, Ireland. The remains of over 800 babies were discovered months ago in a cistern connected to the catholic home.
Stay tuned for updates at www.itccs.org
source » 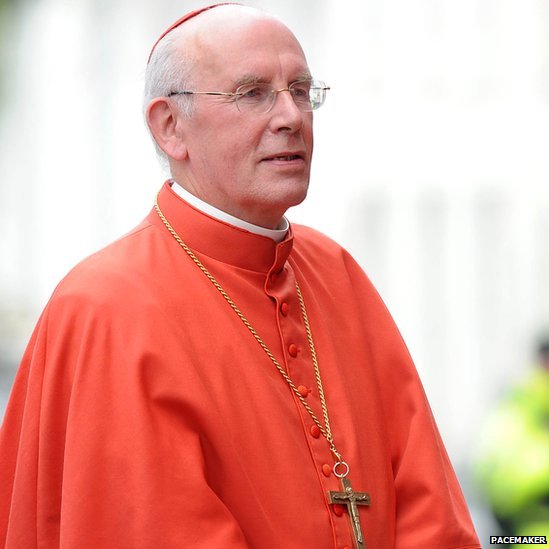 The Vatican has announced that it has accepted the resignation of the leader of the Catholic Church in Ireland, Cardinal Seán Brady.

Last month, Dr Brady, who has been the leader of Ireland’s Catholics for 18 years, confirmed that he offered his resignation to Pope Francis in July.
His tenure had been beset by clerical child sex abuse scandals and claims that he helped to cover up one case.
Archbishop Eamon Martin has been announced as his successor.
Pope Francis has appointed him Archbishop of Armagh and Primate of all Ireland.
He was appointed as coadjutor archbishop of Armagh in January 2013 and ordained in April 2013.
Cardinal Brady resisted calls to resign in 2010, when it emerged that when he was a young priest in 1975, he attended meetings during which two teenage sex abuse victims were sworn to secrecy after they alleged they had been abused by Fr Brendan Smyth.
All cardinals are obliged to offer to resign when they reach their 75th birthday, but the Pope decides whether to accept it.
‘Privilege’
Dr Brady said he was “pleased” that Pope Francis had accepted his resignation and spoke about some of the highlights of his time in the church.

“It has been my privilege to have been appointed a bishop by Pope St John Paul II, to have worked closely with Pope Benedict XVI, and to have taken part in the conclave that elected Pope Francis – that conclave has been the highlight of my life,” he said.
“I am looking forward to retirement and, no doubt, it will take me some time to get used to it, but it will be good to have more time for family, friends and to follow the football.”
Archbishop Martin said he genuinely felt “honoured to assume the role of ‘shepherd’ in the Archdiocese of Armagh”. 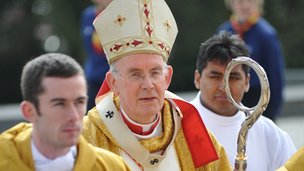 Christened as John B Brady, he attended St Patrick’s College in Cavan before entering the seminary at Maynooth, County Kildare.
After his ordination in 1964, he returned to Cavan to teach in his old school, and acted as a part-time secretary to the Bishop of Kilmore, the late Bishop Francis McKiernan.
He moved to Italy in 1980, were he was appointed vice-rector and later rector of the Irish College in Rome, before returning to Ireland to work as a parish priest in Cavan.
In February 1995, he was ordained coadjutor (assistant) Archbishop of Armagh, a post given to the man earmarked to succeed the leader of the Catholic Church in Ireland.
Following the retirement of Cardinal Cahal Daly, Seán Brady became archbishop of Armagh and primate of all Ireland in October 1996.
He was created a cardinal in November 2007.

“No doubt many challenges lie ahead of me, but I look forward with trust and hope in God to sharing with others the joy of the Gospel,” he said.

Brendan Smyth was at the centre of one of the first paedophile priest scandals to rock the Catholic Church on the island.
The Northern Ireland-born cleric, who was later convicted of more than 100 charges of child sexual abuse, died in prison in 1997.
Public apology
However, instead of going to the civil authorities about the teenagers’ allegations against him in 1975, clerics, including Seán Brady, took evidence from the pair and asked them to sign vows of silence.
Cardinal Brady apologised publicly for his role in mishandling the claims against Smyth, and described himself as a “wounded healer” who would, in future, prioritise the safety of children in the church.
However, in 2012, a BBC investigation into the case revealed that Dr Brady had failed to ensure the safety of other victims of Fr Brendan Smyth, despite being given their names and addresses by one of the two teenagers who had reported the abuse in 1975.
In his response to the BBC investigation, Dr Brady said he had been asked by his then bishop to record the allegations, and described his role as merely that of a “note taker”.
Cardinal Brady added that as a priest in 1975 he had “absolutely no authority over Brendan Smyth” and was “shocked, appalled and outraged” when he discovered in the mid-1990s that Brendan Smyth had gone on to abuse others.
He apologised to one of the abused teenagers in May 2012, but said he had no intention of stepping aside.
In addition to his own personal difficulties, the cardinal has presided over the church at a time of immense and turbulent change, with falling church attendances, dwindling ordinations and strained relations between the church and state authorities.
A series of government-backed inquiries in the Republic of Ireland, including the Ferns Report, the Ryan Report and the Murphy report, laid bare the extent of clerical child abuse over many decades.
Public outrage at the abuse was compounded by evidence of church authorities’ attempts to cover it up to protect the reputation of the institution.
source »

One thought on “Breaking: Ireland Cardinal Resigns After Exposè [ITCCS]”