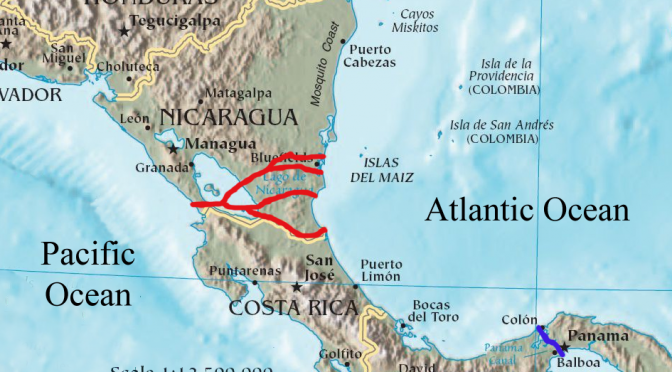 Russia continues to build bridges of goodwill around the world for mutual progress.
Russia will be helping the Indians build nuclear power plants. The Nicaraguan Canal would be a better and bigger alternative to Panama Canal.
These projects are to be done on top of the plan to connect the Far East to SouthEast Asia and Central America via a high speed railway system through Siberia.
On the other hand, China will also be investing in India… 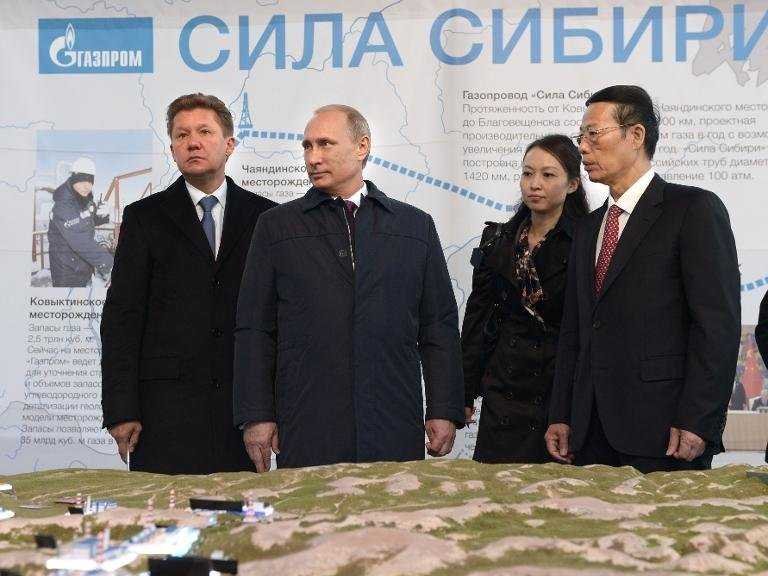 Beijing (AFP) – China and Russia will build one of the largest ports in northeast Asia on Russia’s Sea of Japan coast, reports said, in a further sign of the powerhouses’ growing alliance.
The seaport is expected to be able to handle some 60 million tonnes of cargo a year, China’s state-run People’s Daily Online reported late Wednesday — comparable to Britain’s busiest port Immingham or Le Havre in France, according to European Commission statistics.
The new facility will be located in far eastern Russia, just 18 kilometres (11 miles) away from the Chinese border. The region is also close to North Korea.
Chinese and Russian leaders inked a deal on the port at May’s Conference on Interaction and Confidence Building Measures in Asia (CICA) in Shanghai, the report said.

By Dipanjan Roy Chaudhury, ET Bureau | 10 Sep, 2014, 03.06AM IST
BEIJING: Bullet trains to kickstart state-of-the-art infrastructure in India have caught the imagination of Japanese and the Chinese.
Chinese President Xi Jinping’s visit to India from September 17 will witness a landmark railway framework cooperation that involves introducing bullet trains, upgrading existing railway lines, modernising India’s rail platforms and cooperation between the railway academies and personnel of both countries.
This comes within weeks of Japan’s offer ..
Read more at:
http://economictimes.indiatimes.com/articleshow/42128542.cms?utm_source=contentofinterest&utm_medium=text&utm_campaign=cppst

Red flags flutter next to a national emblem and a national flag of China on top of the Great Hall of the People in Beijing, March 12, 2014. (Reuters/Petar Kujundzic)

China’s outbound direct investment (ODI) reached a record high of $108 billion, to become the world’s third-largest investor for the second consecutive year.
Investment grew by 22.8 percent from last year, while global outbound investment went up by 1.4 percent; the Chinese news agency Xinhua cites a report from the Ministry of Commerce (MOC), National Bureau of Statistics and State Administration of Foreign Exchange.
The increase was mostly driven by leasing and business services, finance, mining, wholesale and retail, and manufacturing, which together accounted for 83 percent of the investment.
The largest deal was the purchase by the Chinese oil company CNOOC of Canada’s Nexen at $14.8 billion, Fang Wei, the deputy head of the Department of Outward Investment and Economic Cooperation of MOC said.
By the end of 2013, 15,300 Chinese companies established 25,400 ODI projects in 184 countries and regions around the world.
continue reading »

Argentina will receive the first tranche of yuan worth up to $1 billion in a massive currency swap with China before the end of this year. The deal will boost the troubled economy’s foreign reserves.
It comes as part of a loan worth $11 billion signed in July by Argentina’s President Cristina Fernandez de Kirchner and Chinese counterpart Xi Jinping during hisLatin America tour– shortly before the country fell into its second default in 12 years.
The Central Bank of Argentina announced that the value of the first disbursement will be between $500 million and $1 billion, according to La Nacion newspaper.
Once it’s got the money Argentina has two options – it could convert the yuan into to dollars in Hong Kong or London, or it could hold the yuan as part of a package of currencies comprising the international reserves of the Central Bank – as Chile and Bolivia have done.
continue reading »

Pundi Srinivasan Raghavan has recently been appointed as the ambassador of India in the Russian Federation,
© RIA Novosti. Alexei Kudenko
MOSCOW, September 4 (RIA Novosti) – Pundi Srinivasan Raghavan has only recently been appointed as the ambassador of India in the Russian Federation, but he feels extremely optimistic about the perspectives of Russian-Indian relations in almost all areas of human life: economy, regional security, counter-terrorism, energy, transport connectivity, culture etc.
Mr. Raghavan spoke to Rossiya Segodnya about Putin’s upcoming visit to India, plans to trade in national currencies, and his views on the Ukrainian crisis.
President Vladimir Putin’s visit to India is scheduled for December. Indian Ministry of Foreign affairs earlier stated that during the visit a road map of our strategic partnership will be signed. Apart from traditionally strong cooperation in military and atomic sectors, will the road map reveal some new areas of cooperation?
Pundi Srinivasan Raghavan: The special and privileged strategic partnership between India and Russia covers virtually every area of human endeavor; political, economic, energy, defense, space, science & technology, education and culture. When our two leaders meet at their annual Summit meeting later this year, I expect they would review our cooperation in all these areas and articulate their vision for the future development of our bilateral cooperation over the next decade. We are working on new areas of cooperation in many of the sectors that I have mentioned. There are particularly exciting opportunities in our economic cooperation, to enhance our trade and investment exchanges to the level that is commensurate with the complementarities between the economies of our two countries. Of course, at the same time we expect that our cooperation in defense and nuclear energy will also be further strengthened through decisions taken at a number of bilateral meetings in the run-up to the Summit and at the Summit itself.
India has shown a lot of interest in joining the Shanghai Cooperation Organization. Will it happen in the nearest future? On what stage are the negotiations concerning India’s joining SCO?
Pundi Srinivasan Raghavan: The Shanghai Cooperation Organization is an important regional mechanism for cooperation in the areas of economy, regional security, counter-terrorism, energy, transport connectivity, culture etc. India has been associated with the SCO as an observer since 2005 and we have stated that we would be willing to play a larger role in the organization as a full member. The SCO Heads of States are meeting in September and we are hopeful that the organization will reach a consensus on its expansion process and procedures.
India has also expressed an intention to sign an agreement on economic cooperation with customs union of Eurasian Economic Community. When will India sign this agreement? On what terms?
Pundi Srinivasan Raghavan: India has very close relations with Russia, Belarus and Kazakhstan – the members of the Customs Union. Our trade and economic cooperation with all three countries are showing an upward trend. We believe that a closer engagement between India and the Eurasian Customs Union – which will soon become the Eurasian Economic Union – will be mutually beneficial and will provide further impetus to our efforts to create a quantum jump in our economic cooperation. We have already commenced a dialogue to look at all aspects of this engagement and to recommend the future course of cooperative action.
continue reading »

Russia to provide Nicaragua with equipment for construction of new inter-oceanic canal
© RIA Novosti. Dmitri Znamensk
MEXICO CITY, September 10 (RIA Novosti) – Russia will provide Nicaragua with a high-tech system that will be used in the construction of an interoceanic canal through the territory of the country, as well as for monitoring volcanic activity and tsunami early warning, Secretary General of the International Civil Defense Organization Vladimir Kuvshinov said Tuesday.
“The construction of the channel is an economic matter, and I would like to emphasize that the implementation of such a serious and large-scale project in terms of engineering requires the use of modern methods and technologies to guarantee its safety,” Notimerica.com quoted Kuvshinov as saying.
Construction works are due to start in December this year. The final version of its route was approved in June, the specified project cost is approximately $40 billion. The new waterway from the Atlantic Ocean to the Pacific through Central America is planned as an alternative to the existing Panama Canal, located at a distance of 600 kilometers. 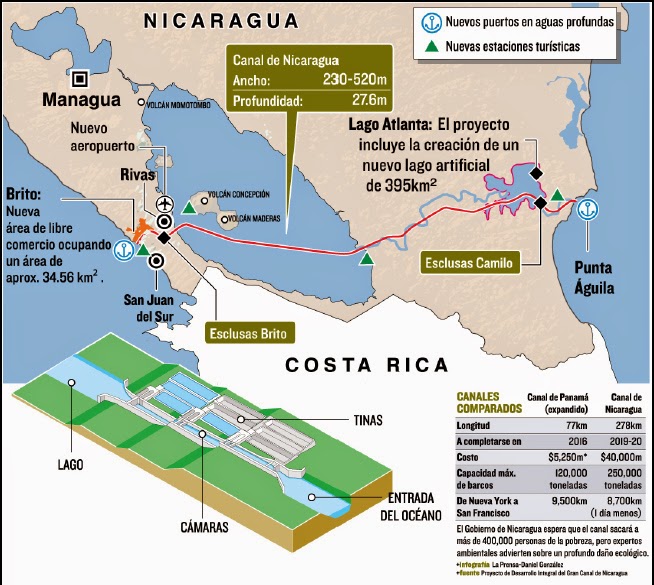 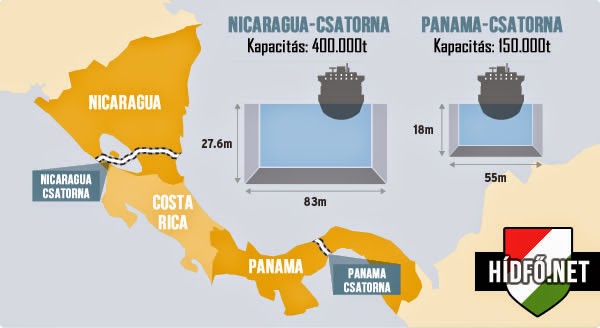