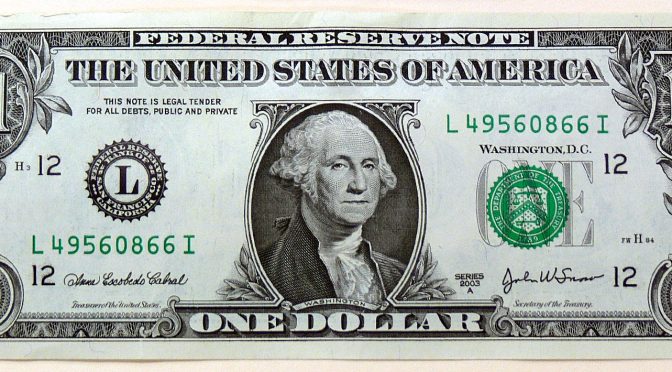 Here’s the former member of Obama’s economic team, munching antagonistic views against the king of world currencies, .i.e fiat US dollar.
” From 2009 to 2011, Bernstein was the Chief Economist and Economic Adviser to Vice President Joe Biden, executive director of the White House Task Force on the Middle Class, and a member of President Obama’s economic team.”

WASHINGTON — THERE are few truisms about the world economy, but for decades, one has been the role of the United States dollar as the world’s reserve currency. It’s a core principle of American economic policy. After all, who wouldn’t want their currency to be the one that foreign banks and governments want to hold in reserve?

But new research reveals that what was once a privilege is now a burden, undermining job growth, pumping up budget and trade deficits and inflating financial bubbles. To get the American economy on track, the government needs to drop its commitment to maintaining the dollar’s reserve-currency status.
The reasons are best articulated by Kenneth Austin, a Treasury Department economist, in the latest issue of The Journal of Post Keynesian Economics (needless to say, it’s his opinion, not necessarily the department’s). On the assumption that you don’t have the journal on your coffee table, allow me to summarize.
It is widely recognized that various countries, including China, Singapore and South Korea, suppress the value of their currency relative to the dollar to boost their exports to the United States and reduce its exports to them. They buy lots of dollars, which increases the dollar’s value relative to their own currencies, thus making their exports to us cheaper and our exports to them more expensive.
In 2013, America’s trade deficit was about $475 billion. Its deficit with China alone was $318 billion.
Though Mr. Austin doesn’t say it explicitly, his work shows that, far from being a victim of managed trade, the United States is a willing participant through its efforts to keep the dollar as the world’s most prominent reserve currency.
When a country wants to boost its exports by making them cheaper using the aforementioned process, its central bank accumulates currency from countries that issue reserves. To support this process, these countries suppress their consumption and boost their national savings. Since global accounts must balance, when “currency accumulators” save more and consume less than they produce, other countries — “currency issuers,” like the United States — must save less and consume more than they produce (i.e., run trade deficits).
This means that Americans alone do not determine their rates of savings and consumption. Think of an open, global economy as having one huge, aggregated amount of income that must all be consumed, saved or invested. That means individual countries must adjust to one another. If trade-surplus countries suppress their own consumption and use their excess savings to accumulate dollars, trade-deficit countries must absorb those excess savings to finance their excess consumption or investment.
Note that as long as the dollar is the reserve currency, America’s trade deficit can worsen even when we’re not directly in on the trade. Suppose South Korea runs a surplus with Brazil. By storing its surplus export revenues in Treasury bonds, South Korea nudges up the relative value of the dollar against our competitors’ currencies, and our trade deficit increases, even though the original transaction had nothing to do with the United States.
This isn’t just a matter of one academic writing one article. Mr. Austin’s analysis builds off work by the economist Michael Pettis and, notably, by the former Federal Reserve chairman Ben S. Bernanke.
A result of this dance, as seen throughout the tepid recovery from the Great Recession, is insufficient domestic demand in America’s own labor market. Mr. Austin argues convincingly that the correct metric for estimating the cost in jobs is the dollar value of reserve sales to foreign buyers. By his estimation, that amounted to six million jobs in 2008, and these would tend to be the sort of high-wage manufacturing jobs that are most vulnerable to changes in exports.
Dethroning “king dollar” would be easier than people think. America could, for example, enforce rules to prevent other countries from accumulating too much of our currency. In fact, others do just that precisely to avoid exporting jobs. The most recent example is Japan’s intervention to hold down the value of the yen when central banks in Asia and Latin America started buying Japanese debt.
Of course, if fewer people demanded dollars, interest rates — i.e., what America would pay people to hold its debt — might rise, especially if stronger domestic manufacturers demanded more investment. But there’s no clear empirical, negative relationship between interest rates and trade deficits, and in the long run, as Mr. Pettis observes, “Countries with balanced trade or trade surpluses tend to enjoy lower interest rates on average than countries with large current account deficits, which are handicapped by slower growth and higher debt.”
Others worry that higher import prices would increase inflation. But consider the results when we “pay” to keep price growth so low through artificially cheap exports and large trade deficits: weakened manufacturing, wage stagnation (even with low inflation) and deficits and bubbles to offset the imbalanced trade.
But while more balanced trade might raise prices, there’s no reason it should persistently increase the inflation rate. We might settle into a norm of 2 to 3 percent inflation, versus the current 1 to 2 percent. But that’s a price worth paying for more and higher-quality jobs, more stable recoveries and a revitalized manufacturing sector. The privilege of having the world’s reserve currency is one America can no longer afford.
Jared Bernstein is a senior fellow at the Center on Budget and Policy Priorities
source »