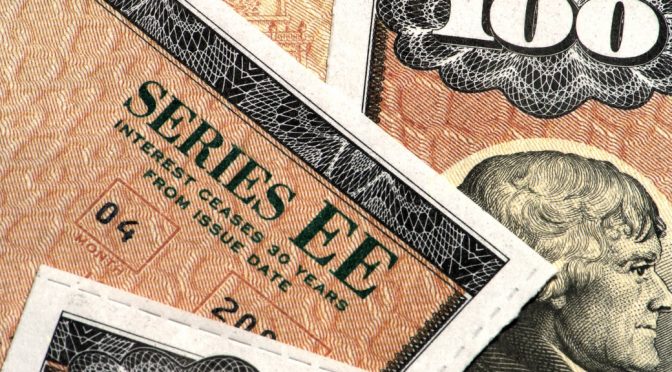 The monetary based economic system is showing its weakness. The seemingly endless printing of paper assets just cannot be sustained anymore.
In the end, they’re just pieces of paper decorated with fancy inkworks and nothing more.

Deutsche Bank strategist Jim Reid and his team just released a huge 104-page study that is focused on answering one question: Are bonds in a bubble?
The answer: well, probably.
Reid writes:
It has long been our view that over the last couple of decades the global economy has rolled from bubble to bubble with excesses never fully being allowed to unravel. Instead aggressive policy responses have encouraged them to roll into new bubbles. This has arguably kept the modern financial system as we know it a going concern. Clearly there have always been bubbles formed through history but has there been a period like the last 20 years where the bursting of one bubble has consistently led directly to the formation of the next?
It’s an amazing statement — that the modern financial system doesn’t just experience bubbles, but in fact needs them. You could say this makes bubbles a feature, not a bug, of the financial system (which is something many people say already).
And the latest bubble appears to have rolled into bonds, with yields tumbling around the world and government debt in Europe currently at half-millennia lows.
What we found was that bonds are where the bubble has migrated to. This is not to say that the bond market bubble is about the burst — far from it — but that it is a necessary condition for maintaining the debt ladened financial system that has been the by-product of major crisis management over the last two decades. The worry is that there is nowhere left for this bubble to go given that it is now in the hands of the lenders of last resort (governments and central banks with regulators ensuring other large captive buyers). Although we think this bubble needs to be maintained to ensure the solvency of the current financial system, the best case scenario is that it slowly pops over time via negative real returns for bondholders. The worst case scenario being future restructuring.
This figure from Deutsche Bank gives a snapshot of government bond yields around the world.
Everything is low. But looking simply at low yields doesn’t provide enough evidence to say whether the current environment is a bubble.
Reid says we also need to look at inflation, because if we’re in an environment in which inflation remains, “structurally lower for an extended period it might help justify lower bond yields.”
Looking deep into history, Reid examines inflation dynamics dated from both 1210 and then from 1800, and he finds that the modern world has generally seen positive inflation as monetary systems became less tied to precious metals.
Reid writes that “the longer-term investor has evidence that we live in a world with a positive inflation bias and as such must approach the current low levels of bond yields with extreme caution.”
Here are the two long-dated charts of inflation.

But whether you think bonds are in a bubble also depends on what you believe the future holds for the world economy.
Reid writes that secular stagnation, the idea popularized last year by Larry Summers that the global economy is facing a new low-growth reality, may support a future of low-inflation, low-growth and consequently, low bond yields.
In his speech at the IMF last year, Summers argued that the economy was showing signs that the natural interest rate, or the rate at which investment and savings result in full employment, may now be negative. Given its recent actions, the ECB appears to be testing this theory.
And while Reid writes that he’s a believer in the idea that the economy is experiencing something like secular stagnation, he says bonds have priced in this possibility to a large degree. Additionally, Reid writes that it isn’t clear that the long-term consequences of a secular stagnation environment don’t include inflation and debt restructuring.
Reid writes: “The longer we live in a weak growth world, the more debt is likely to be built up as fiscal targets are missed and the more difficult it will be to see a way of Governments returning investors’ money back in real adjusted.”
So even if we are experiencing secular stagnation, even over the long-term, the risk-reward proposition of buying bonds at current prices might not be worth it.