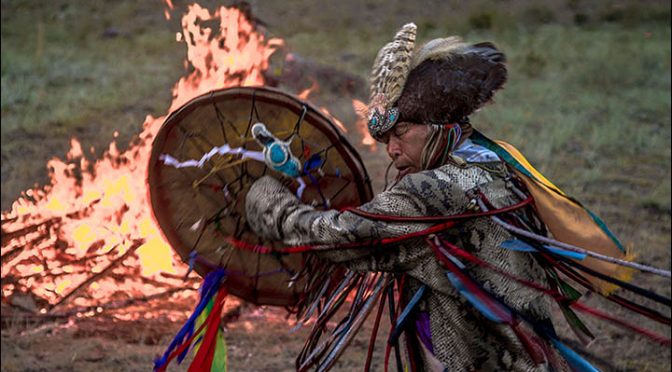 This is not idolatry or fanaticism. It’s pure and simple Spirituality, a way of reconnecting to our ancestors and beyond.
It’s time to relive their methods so we can truly move forward with full sanity.

By Anna Liesowska
10 September 2014
Stunning pictures as shamans from around the world gather in Sayan Mountains. 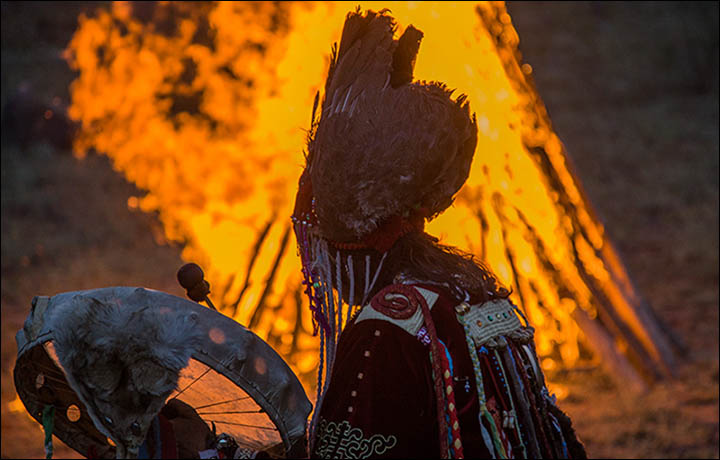 ‘I don’t think I even came across a country with as many practicing shamans as Tuva’. Picture: Alexander Nikolsky

A shaman, in the dictionary definition, is ‘a person regarded as having access to, and influence in, the world of good and evil spirits, especially among some peoples of northern Asia and North America. Typically such people enter a trance state during a ritual, and practise divination and healing.’
These images – giving an extraordinary glimpse inside this largely unknown world – have emerged of a conclave held this summer over nine days near the village Khorum-Dag in Tyva Republic.
This festival, named ‘Call of 13 Shamans’ was held in an area of Siberia that retains great respect for shamans and was intended as a show of unity by the planet’s most respected practitioners. 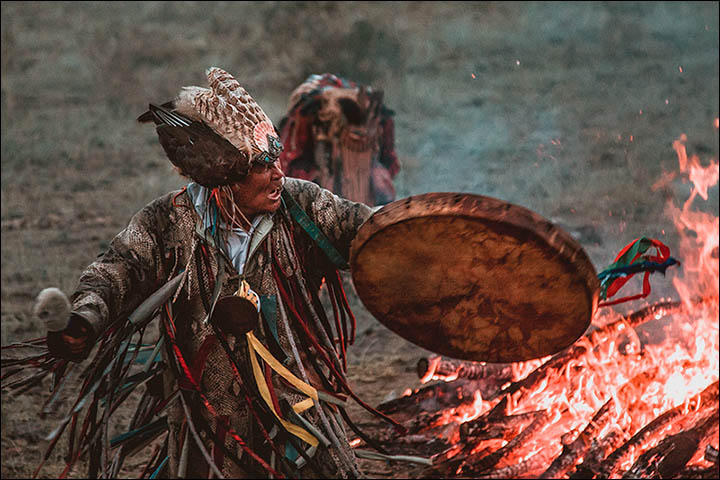 The shamans began by going to different locations in the mountains for three days of meditation, making rites and holding ceremonies.
The timing had been selected to match the natural cosmic cycles and calculations of experts from various theological schools.
‘On these days the sky, as if taking a step toward the ridges of the Sayan Mountains, is getting closer. So the inner eye of the wisest shamans of Earth will open new horizons through communication with spirits, planets and stars of far Black Heaven (Cosmos), comprehension of the mysteries of the interaction of stars, planets and Mother Earth in modern times, and what to expect on our planet in the future,’ said the organisers in advance.
The main organiser was Nikolay Ooorzhak, a hereditary Tyva shaman.
The event was held with the help of Mongush Kenin-Lopsan, president of the Tyva shamans, and Irina Daryina from Belarus.
Among the participants was Guillermo Kestenbettsa (Peru), Hivshu (Greenland), Kim Dzhong Hee (South Korea), Otakame Rogelio Carrillo (Mexico), Mariman (Gerardo Arrieta Aranda) (Chili), Zhamsuran Chuluunbaator (Mongolia), Kailash Kokopelli (Sweden), Elvil Chilbiir-Kam (Olard Dixon) (Russia) and others. 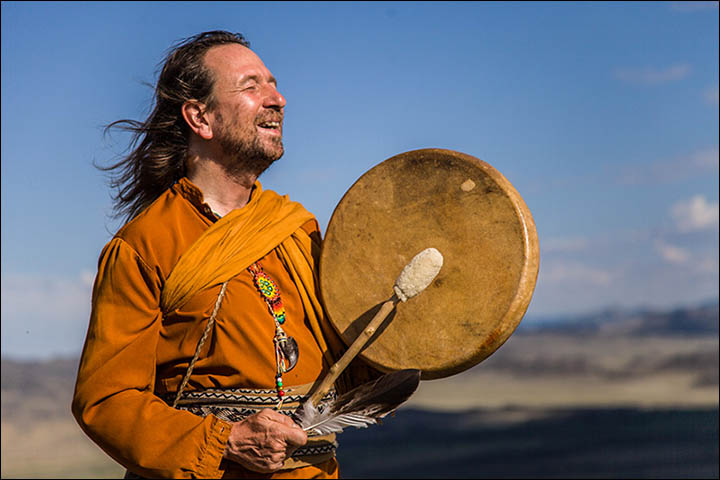 Photographer Alexander Nikolsky said: ‘We came at the site the day before all the shamans arrived. The locals were not very happy about this, because Khorum-Dag mountain is a sacred place and people should not disturb the spirits. As if to confirm their words, a great storm erupted on the first night.
‘Then the shamans came and all became quiet; locals even slaughtered a cow to feed us.
‘The shamans sacrificed sheep, but no one was allowed to make pictures of this.
‘The rite that you see on the photographs was the rite of opening the gates, like an invitation to the spirits. The tension was so strong that shaman Nikolay Oorzhak lost consciousness, though he doesn’t like to speak about this. There were moments when I coulnd’t shoot, so strong was the feeling of involvement, and there were other moments when my camera stopped working, it just switched off’.
‘I also helped Kailash Kokopelli in his rites and climbed the mountain with him. It was an incredible experience’. 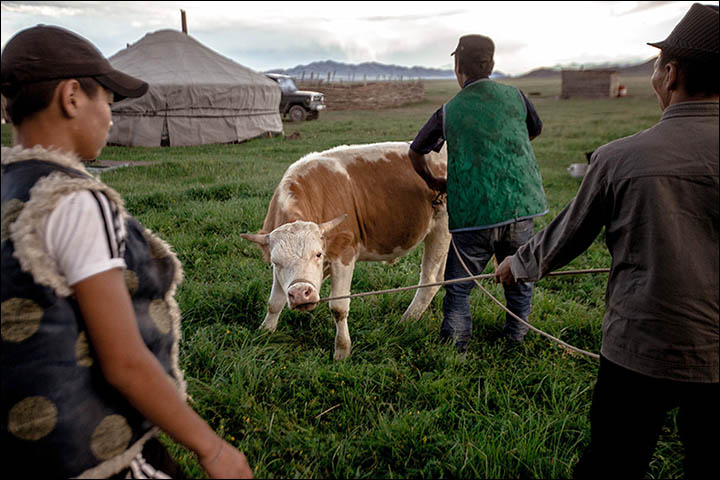 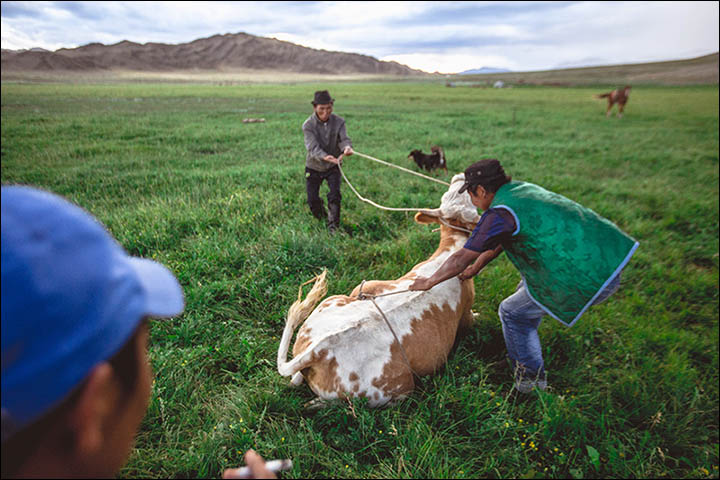 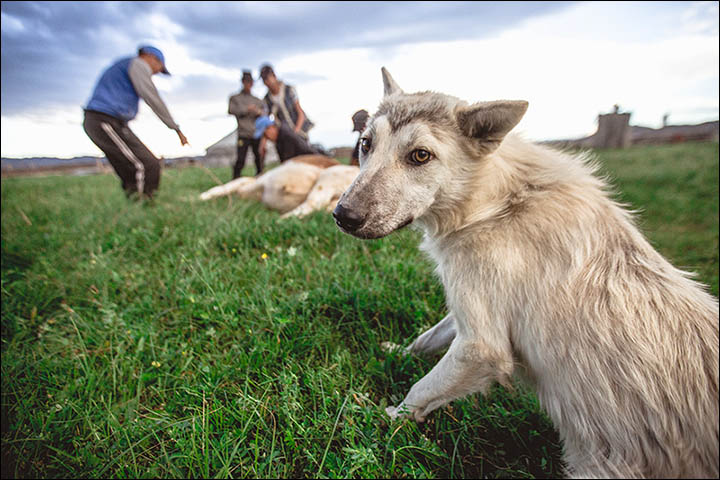 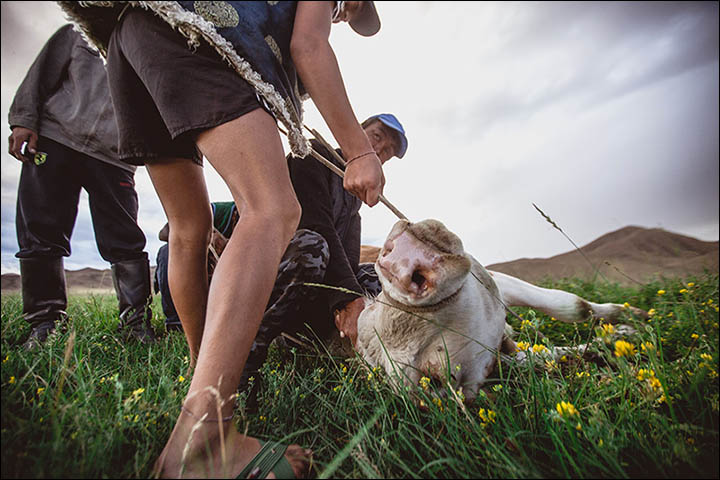 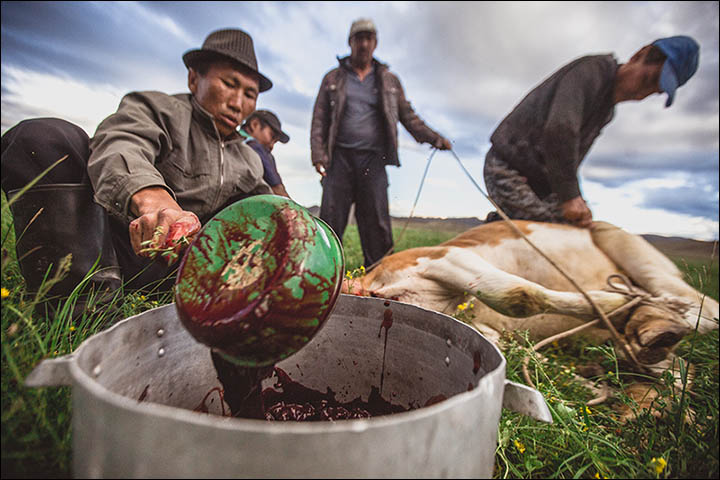 ‘The shamans sacrificed sheep, but no one was allowed to make pictures of this’. Pictures: Alexander Nikolsky

As shaman Irina Daryina from Belarus said: ‘Tyva is a special land, with very powerful mountains and many ancient burial mounds’.
Nikolay Oorzhak explained: ‘I don’t think I even came across a country with as many practicing shamans as Tuva. In Kyzyl, which is our capital city, there are several clinics with more than a dozen shamans. There are also shaman clinics all around Tuva, in villages and regional centres’.
‘To me it has always been a call of my blood; I felt like I belonged shamans, I always sought more knowledge about them and about Buddhism’. 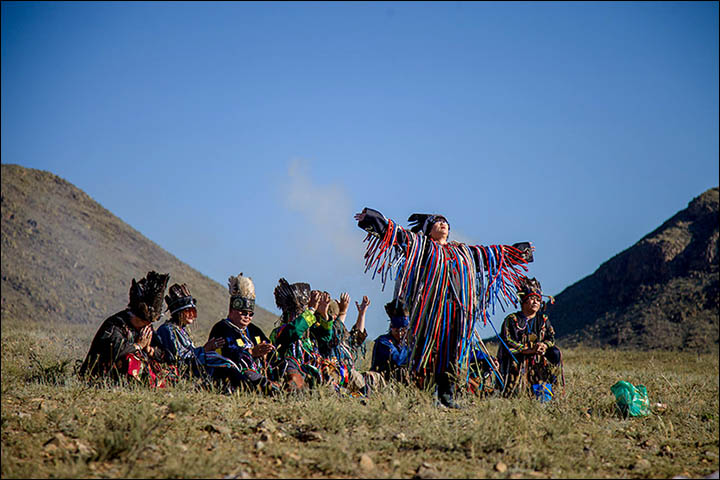 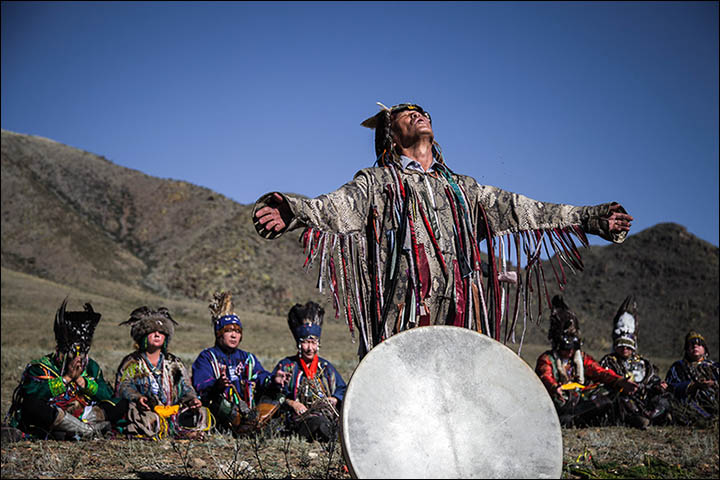 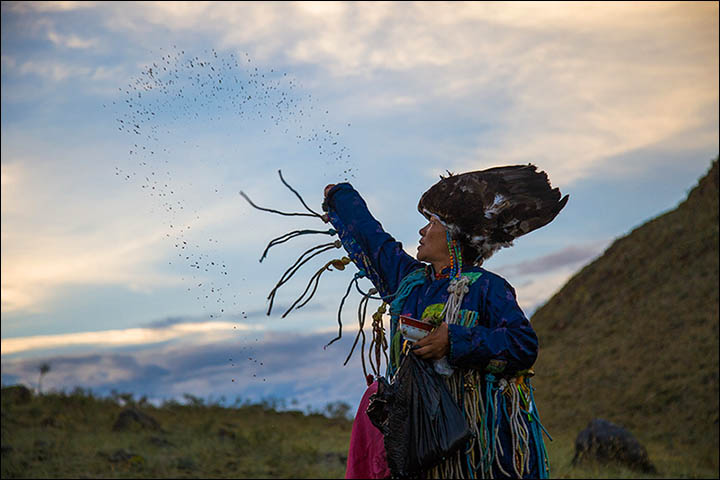 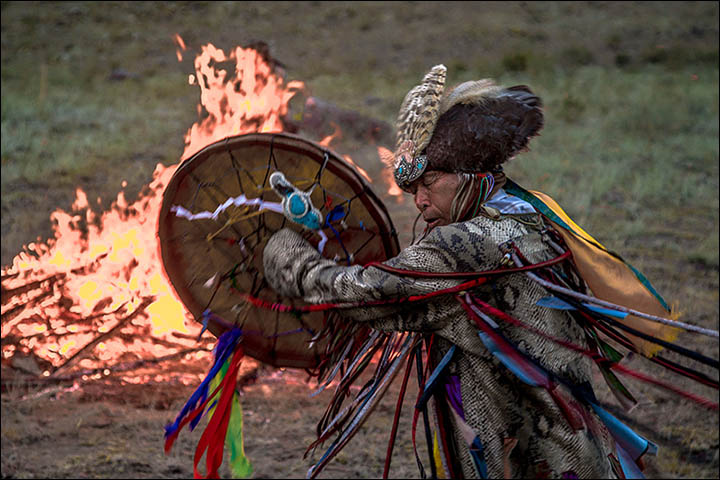 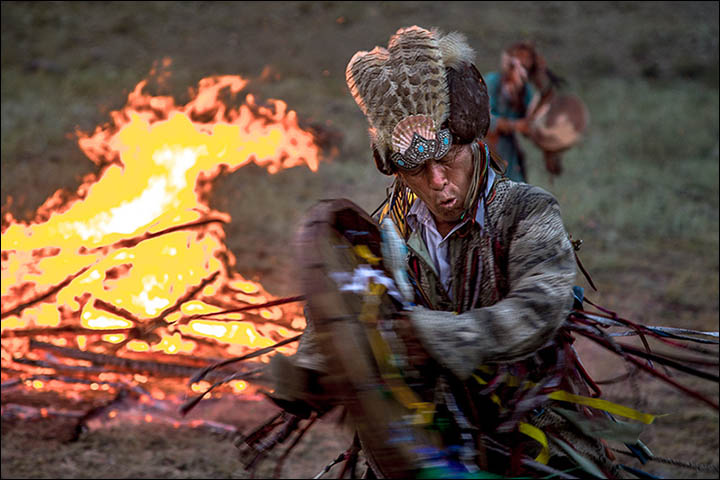 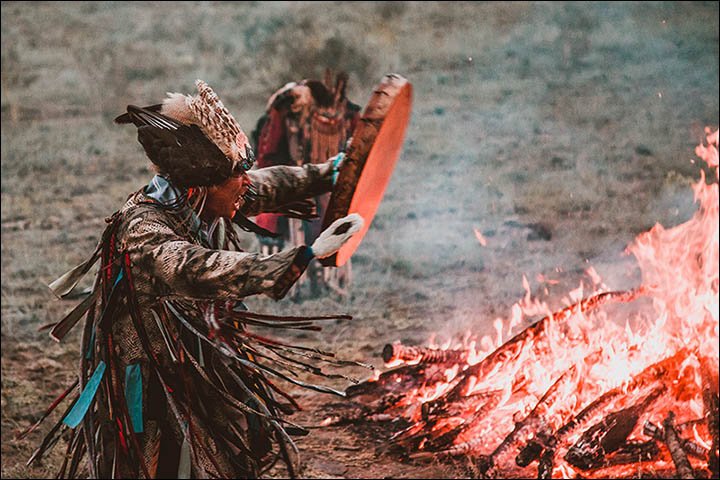 ‘There were moments when camera stopped working, it just switched off’. Pictures here and below: Alexander Nikolsky

‘I hope that Tyvan shamanism survives and continues its tradition in the modern world’, said Mongush Kenin-Lopsan. ‘Today, despite great advances in science and technology, problems and contradictions increase within familes as much as within and between states. This festival was aimed at helping maintain harmony between human beings and the universe’.
Hivshu, who travelled from Greenland, said: ‘Shamanism, songs, tambourines – this is part of my life, even though I do not consider myself a shaman. I believe in Christ. Perhaps he was a great shaman, and a very nice person who didn’t divide people by rich and poor.
‘I never lost touch with my ancestors, and their culture. They gave us love for life and people, and we want to pass it on around the world.
‘There is little story that I keep telling people; it is about an old shaman that met a bishop and told him that he traveled to other worlds, but never saw hell.
‘The only place that was similar to hell, he said, was on our planet. I want to continue encouraging people to stop treating each other badly and bring more love and joy into their lives’. 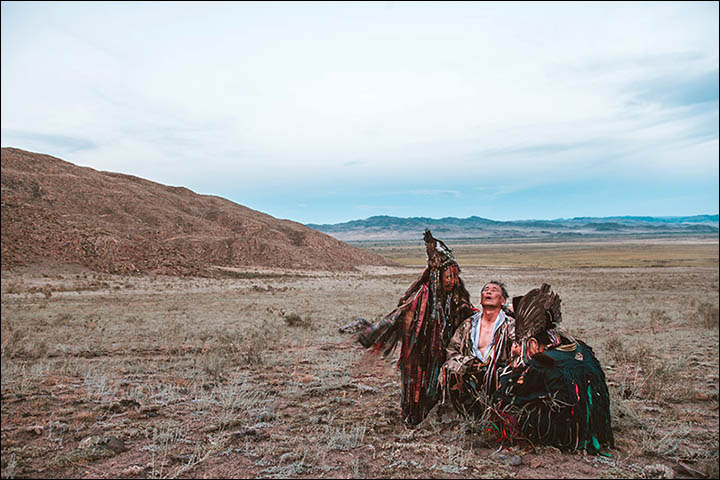 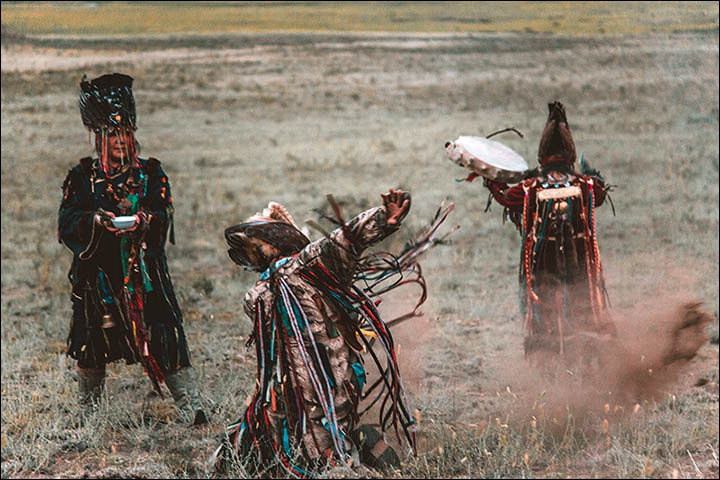 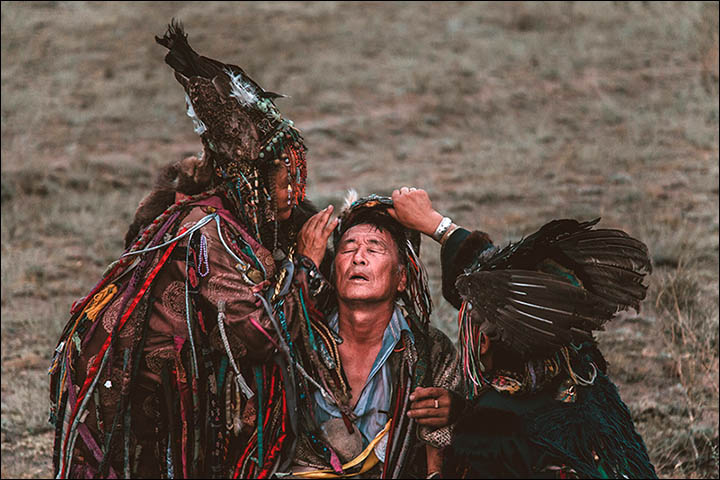 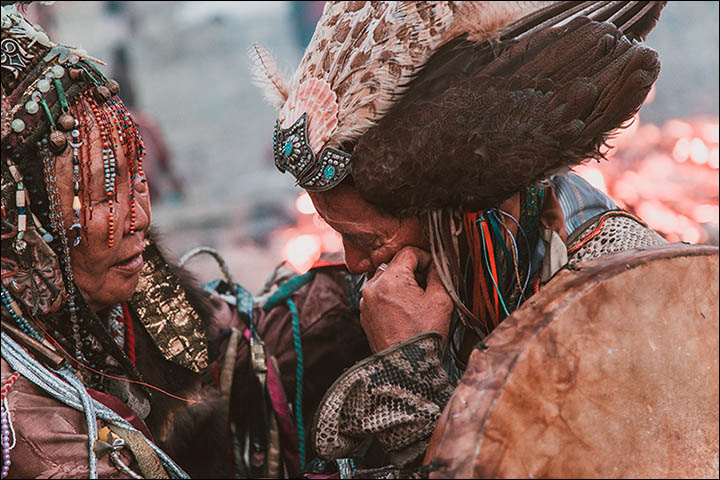 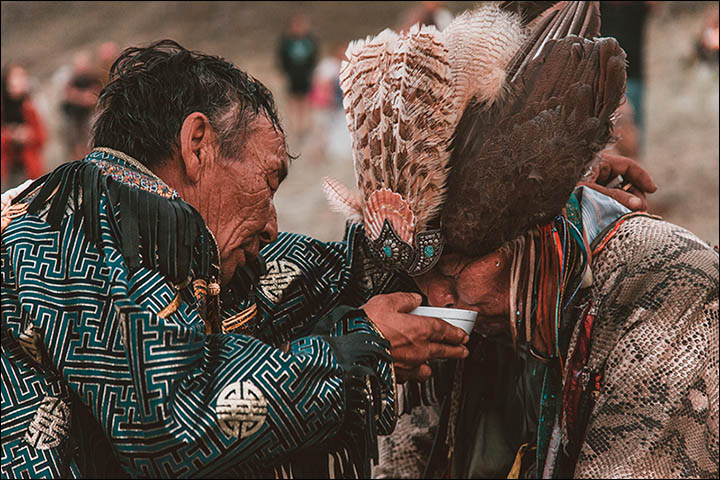 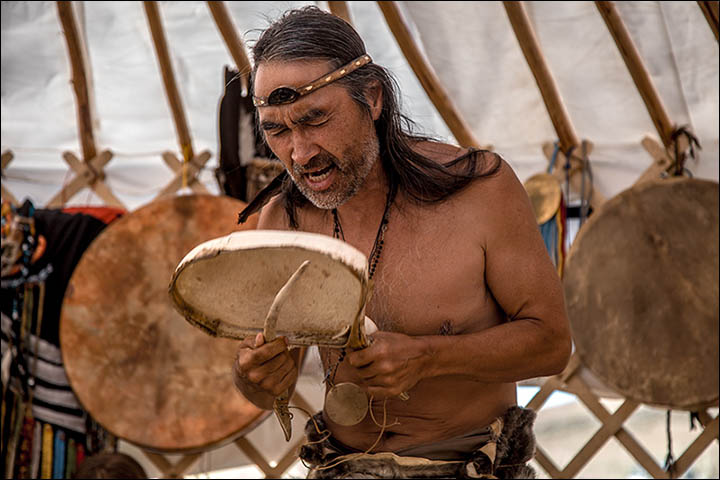 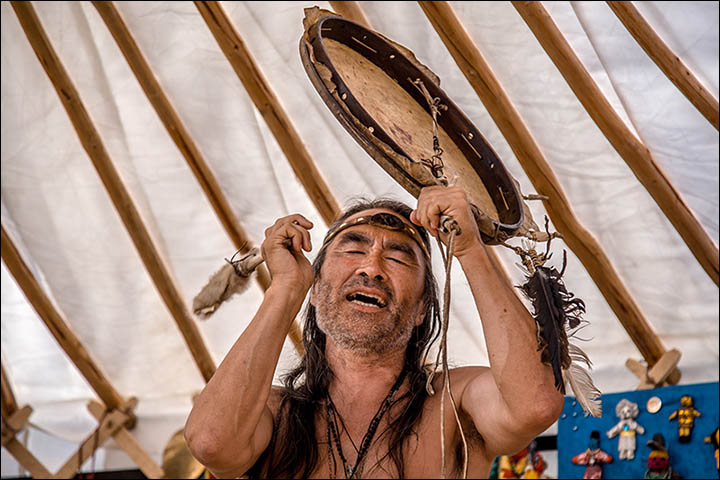 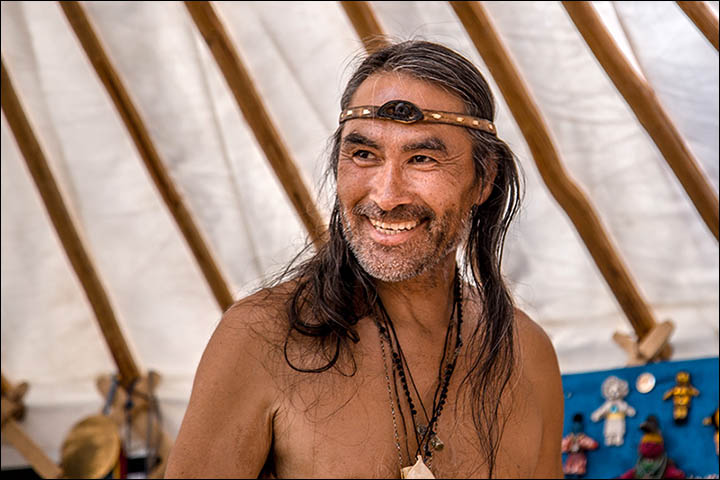