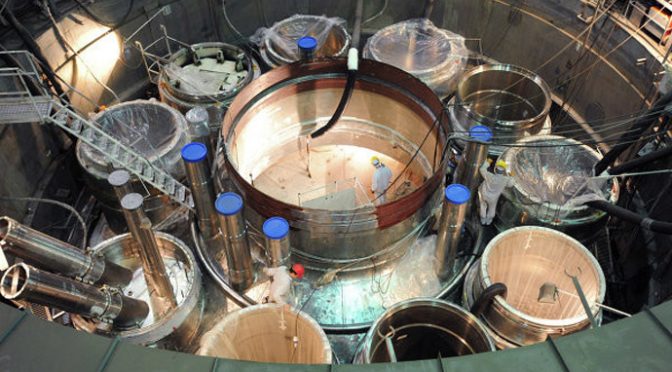 Back in 1989, Paul M. Brown was awarded a patent for his non-radioactive nuclear reactors. These reactors could produce nuclear reaction, and reuse its nuclear waste, for energy production. He died in a car crash, and nobody heard about the technology ever again.
Russia has made progress along these lines and considering their liberal approach to science, it’s no surprise to hear that they will be building these safer and cheaper nuclear power plants soon.

One of the best applications for clean nuclear power is the desalination of water.

Russia’s ‘Breakthrough’ energy project enables closed a nuclear fuel cycle and a future without radioactive waste. The first batch of MOX nuclear fuel has been manufactured for the world’s only NPP industrially power generating breeder reactors.
The first ten kilograms of the mixed-oxide fuel (MOX) – a mixture of plutonium and uranium dioxides (UO2 and PuO2), have been industrially produced by Russia’s nuclear monopoly, Rosatom, at the Mining & Chemical Combine (GKhK) in the Krasnoyarsk region.
A world first, tablets of the fuel of the future have been put on serial production and are destined for Russia’s next generation BN-800 breeder reactor (880 megawatts), currently undergoing tests at the Beloyarskaya nuclear power plant.
The production line, now undergoing start-up and adjustment, was assembled in a mine 200 meters underground and will become fully operational by the end of 2014. Demonstrating the work of the spent fuel storage of the Mining and Chemical Plant. (RIA Novosti/Alexandr Kryazhev)

Fast fission reactors solve the problem of depleted uranium nuclear fuel on the planet. They can ‘burn’ not only ‘classic’ uranium-235, (scarce and already coming to an end), but also uranium-238, which is abundant, and expands the world’s nuclear fuel capacity by an estimated 50 times.
Fuel for breeder reactors could even be made from nuclear waste, which from an ecological point of view is a priceless advantage.
The GKhK facility will be equipped with a unique dissolvent reactor that will break down nuclear waste containing plutonium and extract plutonium dioxide to be used in MOX-fuel production. The spent fuel storage of the Mining and Chemical Plant. (RIA Novosti/Alexandr Kryazhev) The spent fuel storage of the Mining and Chemical Plant. (RIA Novosti/Alexandr Kryazhev)

Energy from here to eternity

Humankind has already produced so much nuclear waste that it would take decades, if not hundreds of years to process and recycle it. As of now, the only light at the end of the tunnel is fast-neutron reactor technology.
The fast-neutron nuclear – or breeder – reactors use technology that enables the use of a wider range of radioactive elements as fuel, thus considerably enlarging the potential stock of nuclear fuel for electric power generation.
Russia is the only country that operates fast neutron reactors industrially.
After decades of research, practically all breeder reactor projects around the world, including in the US, France, Japan and several other countries possessing nuclear energy technologies, were closed down. The only country that currently has operating breeder reactor power generation is Russia.
Over the last 50 years the USSR, then Russia, introduced a number of industrial and research fast neutron reactors. One of them, the BN-600 (600 megawatt), running at the Beloyarskaya nuclear power plant since 1980, is the only fast neutron reactor in the world that generates electricity on an industrial scale. The BN-600 is also the most powerful operable fast neutron reactor in the world.
The Beloyarskaya nuclear power plant is in Zarechny, some 45 kilometers from the regional center of Yekaterinburg, in the Urals region. This year a new BN-800 breeder reactor will become operable at the Beloyarskaya plant.
The service life of the BN-800 breeder reactor is expected to be 45 years. Every month it will produce 475 million kilowatt hours of electricity, enough to ensure constant supply to 3.15 million families (the average monthly consumption of a family of three is 150 kilowatt hours).
The BN-800 uses liquid metal sodium (Na) as a coolant heat transfer agent. Commercial operation of the new reactor is planned to start in early 2015.

Russian physicists have already elaborated the next step for the revolutionary technology: a BN-1200 breeder reactor that is set to be assembled at the same Beloyarskaya nuclear power plant by 2020.
Overall, eight BN-1200 breeder reactors are expected to be constructed by 2030, which means that Russia is the only nation that is entering a new era of nuclear energy power generation – the closed nuclear fuel cycle, in other words truly clean and practically unlimited nuclear power generation.
source »