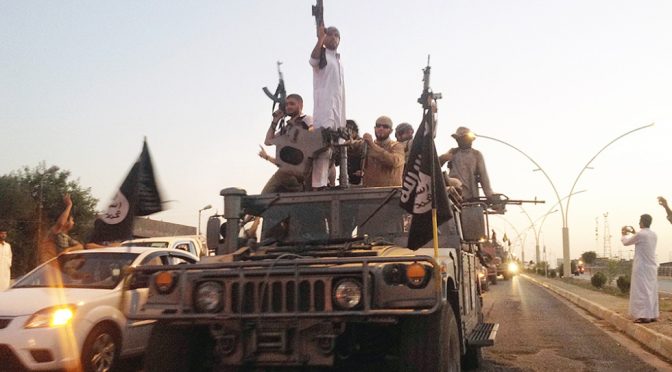 Funny as it is deadly but this is the game Israel /Corporate US want to play. They create problems and solutions, yet they are the only ones profiting from the whole process, leaving countries they’ve been in total ruins.
But the unstoppable wave of disclosures from direct witnesses is something that has shed some very bright light into the dark world of black geopolitics, and that which we should be grateful about as they have vindicated all “conspiracy theorists” who have selflessly risked their reputation, subjected to ridicule, just for the enlightenment of the global population.

CIA is training and at once combating ISIL: Former CIA contractor

The US Central Intelligence Agency is frustrated for being asked to train the ISIL terrorist group and at the very same time to combat it, a former CIA contractor says.

Steven D. Kelley made the remarks in a phone interview with Press TV from Anaheim, California, on Thursday.
On Wednesday, the US House approved President Barack Obama’s strategy to train and arm “moderate” militants in Syria to tackle the threat of ISIL. The Pentagon plans to train and arm 5,000 militants in Syria as part of the Obama administration’s long-term strategy to confront ISIL.
“[T]he CIA is being faced with their current task of continuing to arm and train the rebels, which they’ve admitted to doing – the so-called Free Syrian Army , and at the same time being asked to combat the group ISIL, which it is  getting harder and harder for them to mask that it’s essentially the same group,” Kelley said.
“The CIA, of course, are not stupid people. When they are asked to do this task they do it very well. They’ve said they have spent this time training these rebels in Jordan [and] they’re doing a very good job. And now they are being asked to combat these very same rebels and yet they are still being asked to continue with the training in Jordan. It’s almost like they know that if they were to try to attack ISIL, the best things to do is to probably to start with their bases in Jordan,” he added.
The ISIL terrorists, who were initially trained by the CIA in Jordan in 2012 to destabilize the Syrian government, control large parts of Syria’s northern territory. ISIL sent its fighters into Iraq in June, quickly seizing large swaths of land straddling the border between the two countries.
“One thing that should be noted is that even within the CIA, and this is something that most people don’t take into consideration, there are multiple factions. There’s a faction that is more New World Order, and there is the one that is more pro-constitution.  So there’s always going to be that distinction,” he stated.
“But, I think, it’s a matter of logic. You’ve got people that are having a very hard time spinning the same kind of nonsense that the White House seems to be convincing them to produce every day and the CIA is not quite the same at lying quite so well as the White House is,” Kelley noted.
“They [the CIA] are very openly still supporting the very same group that they are trying to combat, and this is why they’re showing such exasperation for being asked to combat the group and at the very same time feeding it with the other hand,” he concluded.
Syria has been gripped by deadly unrest since 2011. According to reports, the United States and its regional allies – especially Qatar, Saudi Arabia, and Turkey – are supporting the militants operating inside the country.
According to the United Nations, more than 190,000 people have been killed and millions displaced due to the turmoil that has gripped Syria for over three years.
GJH/GJH
source »

Every download of our eBook, Towards Healthcare Emancipation – Premium Edition, provides additional funding to our next project.
With this eBook, you can easily defeat cancer, AIDS and help your body cure all known and unknown illnesses without using drugs, at the comfort of your own home. This is our experience. Find out more about it here.
If you haven’t done so, please like our FB page to encourage others to learn more about our work.
Thank you very much for your valuable support. Mabuhay!

2 thoughts on “CIA Required to Train and Defeat ISIL”