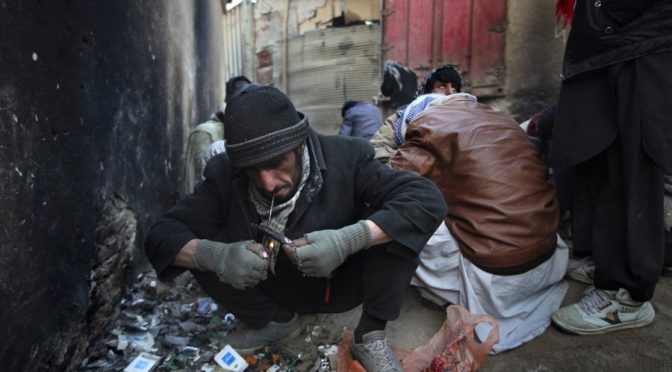 As many are already aware of the kind of democracy the United States is brandishing here and there, it is still worthwhile to hear from someone who not only have experienced it firsthand, but also has the authority to determine the outcome if only the so-called champion of freedom would have given him the free hand, but wasn’t.

One would wonder still how these leaders such as Mr. Karzai would not possibly know that the goal of the invasion was never the welfare of his country. The Hidden Hand has always provided a constant enemy for any given domicile so that turmoil is held constant, in this case, Pakistan.
Afghanistan continues to experience probably the worst that any country could endure from external interference due to the notion that they are inferior or incapable of governing themselves. The ‘war on terror’ was, of course, only a cover for the massive exploitation of its resources, among other agenda.
There is a dizzying cycle of fabricating enemies from former friends, and back.
We cannot allow the continued presence of war freaks masquerading as freedom warriors in the halls of power. They must all be removed and forced to experience what their victims have needlessly undergone or still undergoing, so that they will learn to value life and avoid the recurrence of the same, into their next lives.


KABUL, Afghanistan — In his nearly 13 years as the leader of Afghanistan, Hamid Karzai’s most memorable public stances always seemed driven by some deep emotion, and an almost compulsive need to express it. There was heartbreak for families killed by errant airstrikes, outrage at the scheming of hostile neighbors, palpable longing to preside over a peaceful end to the Taliban insurgency.

On Tuesday, though he delivered a farewell speech in a loose and sometimes jocular way, there was, again, no doubt of the emotion that inspired his words: bitterness at what he saw as an American betrayal of Afghanistan.

“America did not want peace for Afghanistan, because it had its own agendas and goals here,” he told an audience of hundreds of cabinet and staff members at the presidential palace in Kabul, warning them not to trust the Americans. “I have always said this: that if America and Pakistan want peace, it is possible to bring peace to Afghanistan.”

Mr. Karzai’s denunciation of the United States came in terms that had become wearily familiar to the diplomats watching the televised speech from the heavily fortified American Embassy just a few blocks and many blast walls from the palace. But what the president did not say, omitting any recognition of the more than 2,000 American lives and hundreds of billions of dollars the United States expended in fighting the Taliban, may have grated more.

Instead, Mr. Karzai pointedly praised the assistance of countries that had given notably less, like India. He did not mention the sacrifices of other Western allies, nor of his own security forces, who have lost an estimated 15,000 men killed in a war that seems unlikely to end soon.

“For all the difficulties in our relationship at various times, I think his legacy in terms of his country will be a strong one,” Mr. Cunningham said. “He undoubtedly had one of the more difficult jobs in the world for a long period of time, and I’m convinced he really is an Afghan patriot who wants the best thing for his country.”

Though he is to cede the presidency to Ashraf Ghani at inauguration ceremonies on Monday, Mr. Karzai, 56, is not exactly retiring. Mr. Ghani has said he would welcome some role as an adviser or éminence grise for Mr. Karzai.

At first it was thought that Mr. Karzai would live in a lavish house adjoining the presidential palace compound, which was refurbished for him at a cost Afghan officials estimated at more than $5 million.

Mr. Karzai is now said to have rejected it as too opulent, and has decided to move into a private home in the Shar-e Naw neighborhood nearby, according to Western diplomats.