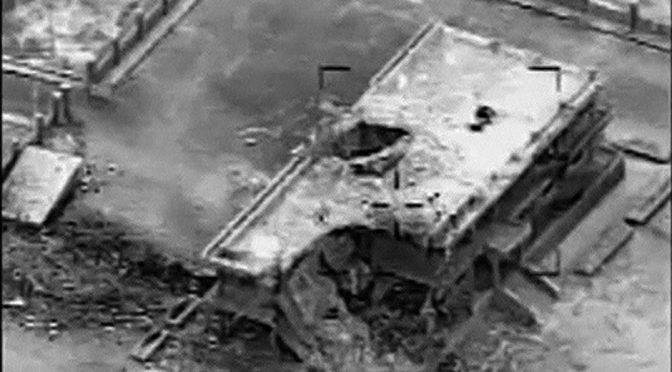 This movie happened before. US air force were dropping bombs in the caves of Afghanistan where Osama bin Laden was enjoying his kidney transplant in a US navy boat.

Now, they are said to be bombing ISIS positions in Syria to end its rampaging on hapless civilians in the area. Yet, one slip of an MSM reporter may change the Sheeples’ point of view.

US Bombed ‘Empty Buildings’ in Airstrikes on ISIL (ISIS) in Syria

The US fanfare surrounding Washington’s bombing raid over Syria was immense. WIth all the hype, you’d have thought that it was a new Pearl Harbor.
With a risk of popping President Obama and the US State Department’s bubble, we need to ask: did the US bomb a load of empty buildings in Syria on Tuesday?
According CNN Middle East correspondent Arwa Damon (photo, above), residents from the town of Raqqa, in northeastern Syria had “mixed reactions to US strikes”. The reason given was a real shocker: Damon revealed on air early Wednesday that ISIL terrorists who were held up in the town may have been tipped off weeks in advance to the US airstrikes on Tuesday. According to Damon:

“15-20 days before the airstrikes, (ISIL) buildings were evacuated, and fighters then mixed in with the local population”.

Maybe Damon let the truth slip out by accident, or maybe she was trying to do what US journalists so often are not allowed to do by challenging Washington’s prefabricated narrative. Regardless, CNN’s chief war enthusiast Wolf Blitzer did not feel the need to pursue the point.
This surprising admission by CNN would mean that the US military may have only destroyed empty buildings in Raqqa, and that Washington’s inflated claims of dead ISIL fighters are probably exaggerated. In other words, it was all a big show, and ISIL’s capabilities were not degraded at all by Obama’s celebrated US blitzkrieg in Syria. EMPTY BUILDINGS: CNN’s report suggest a hollow victory by US on Tuesday.

CENTCOM Has a Leak
If ISIS/ISIL operatives did indeed have advanced warning of US airstrikes in Syria – as this CNN report definitely suggests, then we also have to ask, where was the leak? The most likely source of a leak would be from US CENTCOM located in Doha, Qatar.
The other possibility is that ISIS/ISIL financial sponsors in Saudi Arabia and Qatar had received word of the coming US operation and were instructed to vacate any potential targets.
No Chance of Transparency
Many military experts have questioned the US airstrikes as ‘ineffective’ because targeting static venues will not deter ISIS/ISIL, and these latest revelations will only reinforce that skepticism.
So how much can the public trust US reports of its own bombing campaigns? As far as gathering and verifying intelligence goes, how can we know if  US operatives knew who was where? Usually Washington can say anything and the mainstream press will not question it.
If you are a bona fide intelligence analysts, it can’t be easy – with political busy bodies and State Department geniuses revising their work, and then going back to the intelligence community asking for ‘authentification’ of various Tweets and ‘very chilling’ YouTube videos the White House has scraped-up off the web. As a result, assessments are often conflicting, and patchy – a running mess by anyone’s account.
Given that Washington DC has a diabolical no track record of being highly politicized when it comes to ‘intelligence’, it’s hard swallow anything coming out of Pennsylvania Ave.
At the end of the day, they tell us what they want us to hear.
“When war is declared, Truth is the first casualty.” – Philip Snowden (1916)
source »
Would you like to like to have your own eClinik at home?
With this eBook, you can easily defeat cancer, AIDS and help your body cure all known and unknown illnesses without using drugs, at the comfort of your own home. This is our experience. Find out more about it here.
Every download of our eBook, Towards Healthcare Emancipation – Premium Edition, provides additional funding to our next project.
If you haven’t done so, please like our FB page to encourage others to learn more about our work.
Thank you very much for your valuable support. Mabuhay!

A second and equally interesting, D.C. Whispers report in the same week.  If you have not yet read the initial update, please do so as it will greatly benefit your understanding of the follow-up post here.  It appears President Obama was given an ultimatum by the Pentagon with a strong assist from a high ranking member of the Senate – an ultimatum that proved influential enough that it convinced Senior White House Adviser Valerie Jarrett herself.

Regarding the earlier update that had the president yelling his defense of Islam to Pentagon staffers. This meeting was linked to an earlier meeting from the prior week between State Dept. and Defense. White House was apparently unwilling to sign off on ISIS bombings in Syria w/o Congressional go ahead to allow subsequent bombing of Assad installments.  State was opposed to this due to fears of Russian repercussions, political blowback, and additional hints from Iran they would not support such an agreement.
Something happened between that first meeting, and the one referenced in the earlier update that took place at the White House. Word from some on the Hill is a high ranking member of the Senate with an established history of personal animosity toward the president, threatened to “expose them all after November” if the White House continued dragging its feet on the ISIL situation.  This threat reached the White House inner circle, which is likely exactly what the Senator intended it to do.  A week later we had the White House briefing between the president and Pentagon staff taking place.
At some point during this meeting the president was told outright by Pentagon officials, “Mr. President, you have no choice. You’re exposed here. Besides, this is going to make great television.” That may very well have been the real source of the president’s anger during that meeting. He walked out, then it was reported the president, Jarrett, and a personal aide walked back in, and he agreed to the more limited air strikes and training of rebel forces in Syria, with Jarrett clearly twisting his arm to do so.
Now here is where things get even more interesting. It is now believed by some that ISIS was tipped off as to the exact timing of the bombing campaign. It is not known by anyone I have contact with, if that came from anyone associated within the administration, another Arab state involved, etc. There is more though. Ansar al-Sharia, the al Qaeda-affiliate group that took the brunt of the initial Syria bombings, has direct ties to the 2012 Benghazi U.S. consulate attack. (the Khorasan Group is simply another affiliate of Ansar al-Sharia, though the administration used the name of that group as political cover)

This was pointed out to me by another congressional staffer who then indicated the motivation for focusing on Ansar al-Sharia was due to that group’s leader having hinted during the summer to contacts in Turkey of his intention to leak information pertaining to the others linked to the Benghazi incident if his group was not allowed more influence in the build-up against Assad. These links would apparently prove damaging to Turkey and the White House. If true, and if the Ansar al-Sharia leader was actually silenced, it sends a very strong message to others who may be in the know regarding those earlier allegations of gunrunning from Libya to Turkey and then Syria, to keep their mouths shut.
Perhaps the combination of killing a potential scandal threat, and some “great television” was enough to convince Jarrett, and then Obama, to proceed with the bombing campaign.

source »
Would you like to like to have your own eClinik at home?
With this eBook, you can easily defeat cancer, AIDS and help your body cure all known and unknown illnesses without using drugs, at the comfort of your own home. This is our experience. Find out more about it here.
Every download of our eBook, Towards Healthcare Emancipation – Premium Edition, provides additional funding to our next project.
If you haven’t done so, please like our FB page to encourage others to learn more about our work.
Thank you very much for your valuable support. Mabuhay!

One thought on “US Bombing Empty Buildings in Syria”