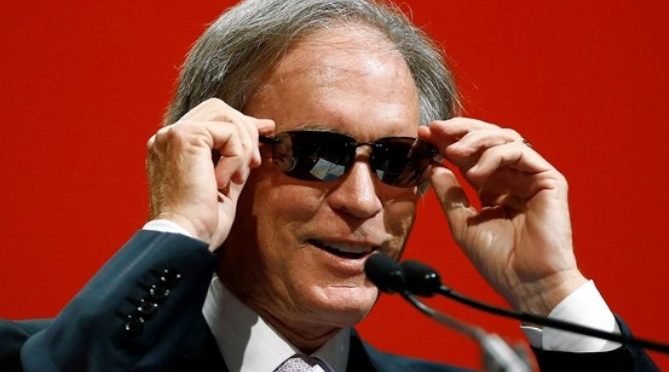 Another flaw of the existing system known as the bond market is being exposed as the co-founder to the largest bond fund manager leaves the sinking ship.
The system of debt is unsustainable. It’s time to not just reboot the system, but to install a new one, preferably an Open Source type OS where everybody can participate upon.

Bill Gross’s surprise departure on Friday from Pacific Investment Management Co. sparked selloffs in some of his biggest wagers, such as inflation-protected U.S. government bonds. The most-traded assets quickly recovered after the exit of the star trader, who dominated the $2 trillion asset manager’s investment strategy. But the less-traded ones are still feeling the effects, according to David Leduc, chief investment officer at Standish Mellon Asset Management Co.
“What you’re seeing most of is a lack of liquidity in the bond market,” said Christopher Orndorff, a money manager at Western Asset Management Co. “When you get a dislocation like this, it tends to exacerbate price movements maybe more than what you’d have seen 10 years ago.”

One person — even a really important person — pushing around borrowing costs for nations and companies worldwide, however briefly, shows the increasing fragility of credit markets that have swelled on the heels of trillions of dollars of central-bank stimulus. Debt still largely changes hands off exchanges, through telephone calls and e-mails.

It’s become increasingly difficult to buy and sell debt as new regulations prompt Wall Street banks to curtail their holdings. Average daily trading in the U.S. bond market fell to $809 billion in 2013 from $1.04 trillion in 2008, according to data compiled by the Securities Industry & Financial Markets Association.
Banks are less willing to cushion big swings using their own balance sheets and Gross’s exit shows just how little it takes to move the needle in the global bond market, which has ballooned by 48 percent since 2008.
The day Gross left Pimco to join Janus Capital Group Inc. (JNS), Mexican government bonds declined 0.3 percent, inflation-protected U.S. bonds lost 0.4 percent and debt of Verizon Communications Inc. (VZ) — one of his bigger company holdings — dropped 0.3 percent. That compares with a 0.05 percent decline on the Bank of America Merrill Lynch Global Broad Market Index.
The moves also illustrate the dominance of the world’s biggest bond fund in a market where dealers’ roles are shrinking. While some investment firms, such as Vanguard Group Inc., have closed bond funds to new investors over the past few years when they got too big, Pimco allowed the Total Return fund to swell to as much as $293 billion.

“The impact of Total Return (PTTRX)’s size remains a question that Morningstar continues to study and examine,” Morningstar Inc. analysts Eric Jacobson and Bridget Hughes wrote in a Sept. 29 report.
While not all the weak spots in the market were due to Gross, investors were concerned that either a new management strategy at the Newport Beach, California, firm or withdrawals could direct money away from his bigger trades.
“Less liquid sectors such as TIPS continued to weaken as a result of Pimco concerns,” Leduc wrote in a Sept. 30 note. “There has not been measurable impact in most liquid sectors.”
Almost six years of near-zero interest rates from the Federal Reserve has suppressed volatility in stocks and government notes, yet the values of some of the least-traded securities have started swinging more in the past few months as investors prepare for rising interest rates by shedding riskier debt.

Junk bonds, for example, plunged 2.1 percent in September, the most since hysteria mounted in June 2013 that rates would rapidly rise as the Fed curtailed its asset purchases. In August, the securities gained 1.5 percent after tumbling 1.3 percent in July, according to a Bank of America Merrill Lynch index of dollar-denominated debt.
Record monetary stimulus has fueled gains of 30 percent on bonds globally since the end of 2008 and concern is mounting about what happens when borrowing costs increase. Flows may reverse, causing losses that spur others to sell, and resulting in a spiraling selloff.
The effects of Gross’s departure from Pimco will probably fade away soon enough. The inability to quickly trade in many parts of the debt market is the bigger issue.
To contact the reporter on this story: Lisa Abramowicz in New York at [email protected]
To contact the editors responsible for this story: Shannon D. Harrington at [email protected] Caroline Salas Gage, David Papadopoulos
source »
Would you like to like to have your own eClinik at home?
You can easily defeat cancer, AIDS and help your body cure all known and unknown illnesses without using drugs, at the comfort of your own home. This is our experience. Find out more about it here.
Every download of our eBook, Towards Healthcare Emancipation – Premium Edition, provides additional funding to our next project.
If you haven’t done so, please like our FB page to encourage others to learn more about our work.
Thank you very much for your valuable support. Mabuhay!