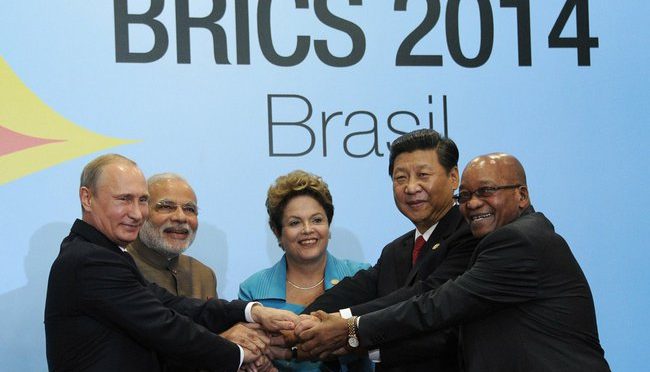 Helga Zepp-LaRouche made this presentation to the “One Belt, One Road” Conference in Beijing, Sept. 5, 2014.
The New Silk Road, as it was proposed by Chinese President Xi Jinping one year ago, and as it has developed momentum through the BRICS Summit in July in Brazil, followed by the BRICS-Latin American Heads of State Summit the next day, has already changed the world. As a result of this New Silk Road dynamic, numerous large projects have been agreed upon throughout the world, for example, the second Panama Canal through Nicaragua, a transcontinental railway from Brazil to Peru, and numerous nuclear cooperation agreements among various countries.

There is a sudden explosion of optimism, where countries dare to assert their sovereignty, and start realizing projects which have been on the shelf for decades, but which were discouraged before by the conditionalities of international financial institutions, even coming from countries which are not yet formally part of the BRICS [Brazil, Russia, India, China, South Africa] or the Silk Road, such as, for example, Egypt, which has unleashed a spectacular program of national economic buildup; or Argentina, which has courageously resisted an attempted assault by the vulture funds.
There is a completely new, culturally optimistic sense of identity of the larger part of mankind, based on the idea that mankind, as the only known creative species, can think and do things it has never done before. There’s also the beginning of a new financial architecture, such as the Asia Infrastructure Investment Bank, the New Development Bank, and a fund to defend countries against speculative attacks.[1] Chinese experts stress that those new banks are not to replace the IMF, World Bank, or Asian Development Bank, but that they are complementary.
However, if the New Silk Road perspective is to succeed, several challenges and lessons of the past 23 years must be addressed. When the Soviet Union disintegrated in 1991, and the Iron Curtain between East and West came down, the Schiller Institute proposed the Eurasian Land-Bridge as the idea to connect the population and industrial centers of Europe with those of Asia through development corridors, the Eurasian Land-Bridge/New Silk Road program. We proposed this program, which was actually meant to be a peace order for the 21st Century, to various governments in Eurasia. But unfortunately, the United States government and Great Britain’s government decided to go for the NATO expansion, culminating in the present crisis we have over Ukraine with Russia.

But then, in 1996, the Chinese government organized a very big conference in Beijing with the title, “The Development of the Regions Along the Eurasian Land-Bridge,” with the participation of 34 countries, and I was one of the speakers at that conference. China, at that time, declared building the Eurasian Land-Bridge as the strategic long-term perspective until the year 2010. But instead of proceeding on that path, various crises intervened: There was the Asia financial crisis of ’97, largely the result of speculative attacks by such people as George Soros, which caused the collapse of various Asian currencies. As a consequence, there was the Russian GKO state bankruptcy in ’98, as well as the LTCM, Long Term Capital Management, crisis in ’98. All this blocked the Silk Road policy for the time being.
In 2007, the global financial crisis began in earnest, with the U.S. secondary mortgage market blowing out, and then, the collapse of Lehman Brothers and AIG in September 2008. Now, the trans-Atlantic financial sector is hopelessly bankrupt and is facing a new blowout much worse than 2008. The fact is, that the too-big-to-fail banks are hopelessly bankrupt. As top insiders privately insist, the elephant in the room is the moral hazard: The government bailout simply transformed private gambling debt into public state debt, and encouraged bad behavior of banks, and so, did everything to make a future crisis more likely and more grave.
This led to a significant abandoning of sound banking practice. In the past, central banks would not provide money to do bailouts. If banks could not hold onto their loans, they had to write them off. Now, the distinction between expected and unexpected losses is gone; banks hold onto their bad debts, and even worse, they continue trading with them! There is no concern for the future consequences of these practices, except the expectation that trading revenues will continue to grow. Normally, one would sell bad assets for reduced amounts, or if they were kept on the books, they would be counted against the bank.
All of this is papered over by the so-called instruments of the toolbox, which led to massive bailouts and quantitative easing by the Fed, and now even the ECB, which lowered its interest rate to almost zero today, to do the same. And as a result, the bubble has grown, the too-big-to-fail banks are 40% larger, and they’re holding more questionable assets, the exposure risk is growing, and they all pretend not to see it.
Institutional experts, like the FDIC vice chairman in the United States, Thomas Hoenig, have warned that if one too-big-to-fail bank blows, the entire system comes down. The total of outstanding derivatives contracts at this point is $2 quadrillion: This can never be paid. The only way to deal with that, is exactly the same way as Franklin D. Roosevelt did it in 1933, in response to the financial crisis then: the Glass-Steagall banking separation law. In the U.S. Congress and in the Senate, there is legislation introduced, supported presently by over 80 Congressmen and 11 Senators, and more than 200 national organizations, to reintroduce the Glass-Steagall legislation. My husband, Mr. Lyndon LaRouche, who is the only economist who has forecast this crisis at every relevant crossroad, proposed four laws which together could remedy the situation.

First, there must be an immediate reintroduction of Glass-Steagall, the separation of commercial and investment banks.
Secondly, one has to go back to the American System of economy established by the first Secretary of the Treasury, Alexander Hamilton, who created a National Bank, where the only power to create credit lies with the sovereign government, and not with private banks.
Third, create a credit system whose credit is generated entirely for future production of the real economy, but it must be based on scientific principles of physical economy and for no other purpose. And that has to be done in every country: Every country needs a national bank, with the sovereignty to create credit, to finance the projects of the New Silk Road, and for that we need multilateral, long-term credit arrangements among the participating countries of the New Silk Road, over 20, 30, 40, 50 years.
There must be also, fourthly, a science-driver introduced into the economy, leading to higher energy-flux densities in the production process. Today, that means there must be a crash program for the realization of thermonuclear fusion power, as the absolutely necessary next higher level of energy-flux density. This is why the Chinese lunar mission Chang’e-3, Chang’e-4, and Chang’e-5 are of absolutely crucial importance for the future existence of humanity; why the breakthrough of the Yutu rover leading to the landing on the Moon last December, with the intention to mine helium-3 on the Moon for a future fusion economy on the Earth, is absolutely essential to finding a solution to the present crisis.
Thermonuclear fusion power based on helium-3 will not only give mankind energy security for millions of years; helium-3 on the Moon as the basis for fuel, means also raw materials security. The fusion torch technology will turn waste into all kinds of new raw materials through isotope separation, but also the use of helium-3 represents a new scientific revolution, since the fusion reaction product is not a neutron, which is very damaging for the reactor material, but a proton, which means it can be controlled and directed using magnetic fields, and in this way, it can be used for direct energy conversion, which has a 70% efficiency.
This will create a completely new economic platform on Earth, and for space propulsion which will allow 1-gravity constant acceleration, and allow space travel to Mars and other celestial bodies. The mastering of fusion power based on helium-3 will allow the defense of the planet against asteroids, meteorites, comets, Sun storms, and similar things.
Now, what has this to do with the New Silk Road? The New Silk Road means a shift away from geopolitical interests of nations and groups of nations, and focuses on the common aims of mankind. It focuses on the question, not what is my advantage in this or that region, but where will mankind be in 100 years from now, or even in 10,000 years from now? The New Silk Road will become a World Land-Bridge, uniting and connecting all nations and cultures into one, one humankind. It will be, as President Xi Jinping said, inclusive for all humanity and it will bring forth the true identity of mankind, as the creative species in the universe.

[1] The BRICS established a Contingent Reserve Arrangement (CRA), which includes a $100 billion fund to help nations deal with capital flight and other forms of financial warfare.
source »
Would you like to like to have your own eClinik at home?
You can easily defeat cancer, AIDS and help your body cure all known and unknown illnesses without using drugs, at the comfort of your own home. This is our experience. Find out more about it here.
Every download of our eBook, Towards Healthcare Emancipation – Premium Edition, provides additional funding to our next project.
If you haven’t done so, please like our FB page to encourage others to learn more about our work.
Thank you very much for your valuable support. Mabuhay!