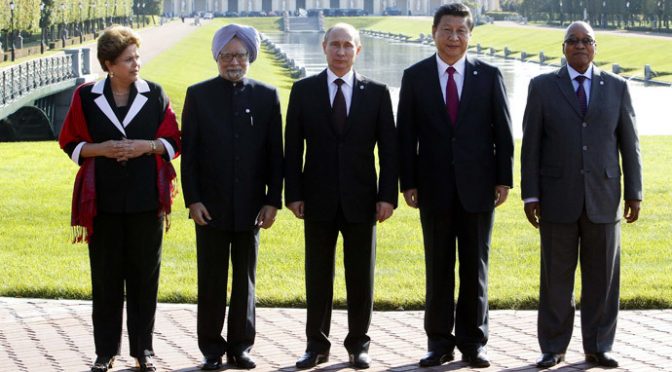 When comparing between contrasting philosophies we tend to look at the character of those who advance them. We seek to know more about the people involved.
In the case between BRICS and NWO, the choice is simple enough just by looking at the leaderships. We could go back much farther into the recent past and look at what they had actually done in any given situation.
Even in the absence of adequate exposure, those who are directly affected of their actions can objectively say that BRICS is a far better alternative.

While we can hardly hear the echoes of the chorus “Yes, We Can!” of the once globally adulated First Black Man in the White House.
This article appears in the October 3, 2014 issue of Executive Intelligence Review.

The Moral Superiority of the BRICS Heads of State

by Helga Zepp-LaRouche
[PDF version of this article]
Sept. 27—There are currently two completely different groupings of nations in the world, which differ from each other on an extremely crucial point: the moral quality of their heads of state. On the side, the BRICS countries and an array of other developing countries, we find leaders who are courageously defending the general welfare of their populations, and also trying to bring the whole world into harmonic coherence. On the other side, are the leaders of the so-called “Free West,” the merciless proconsuls of the banks, the casino economy, and the arrogant policies that recognize hardly any ethical standard, just the defense of their own power.
If the citizens of the trans-Atlantic world were not prevented by the lock-step media from seeing for themselves the parallel universe that has emerged since the summit of the BRICS countries in July in Brazil—a world motivated by a stunning sense of optimism—such enthusiastic cultural optimism would have swept Europe and the United States as well. It won’t be long before this news from the New World can no longer be suppressed.

Threat of a Police State

Meanwhile, the Western world is threatened not only by terrorist attacks from IS, al-Nusra, and other al-Qaeda offshoots, but also by a tightening of police-state methods, for which the terrorism threat provides the occasion and pretext. Lyndon LaRouche warned recently, in connection with the resignation of scandal-threatened U.S. Attorney General Eric Holder, that in the United States, everything points to a further intensification of the police-state measures that were imposed after the 9/11 attacks, even up to a fascist dictatorship. And this does not only apply to the United States. It must be prevented at all costs, and the means to do that exist, not least by the release of the classified 28 pages of the original Congressional Inquiry report on Sept. 11, 2001, which goes into the funding of the terrorists and the role of Saudi Arabia, LaRouche said. But above all, the American people and world public opinion must become aware of this danger.
Iraqi Prime Minister al-Abadi warned on Sept. 25 that from the interrogation of prisoners—IS terrorists who come from the United States and France—Iraq has learned that terrorist attacks are planned against the American and French subway systems. The Foreign Ministry in Berlin warn of an increased risk for German citizens with regard to 24 African, Arab, and Asian countries, namely those in which Islamist terror groups are active.
The direction things are going is reflected in the new anti-terror laws that the Australian Senate just passed, which allow the intelligence services to spy on virtually every citizen and to monitor the entire Australian Internet, as well as to punish “irresponsible” journalists or “whistleblowers” with ten years in prison. Critics of these laws charge that these people might never even find out which operations they are deemed to have acted “irresponsibly” about, because the operations are secret.
In Europe, where the promised exposure and revocation of the comprehensive spying on citizens by the American NSA, the British GCHQ, and probably also the German BND, etc., has not yet occurred, this new terror alert threatens to quickly smother the delicate voices of opposition to such an Orwellian dictatorship. The danger of fascist dictatorships under the pretext of the fight against of terrorism is just as real as the threat of World War III emerging from the situation in the Middle East, or the confrontation of NATO with Russia. But there is an enormous chance that this failing policy will soon be replaced by a new one.

The events at this year’s UN General Assembly in New York are the best indicator of the new geometry of world politics. While President Obama tried in three manic speeches to demonstrate “leadership”—in the fight against anthropogenic climate change, in the war against ISIS terrorism, and in a dreadfully late mobilization against the Ebola crisis—the heads of state of the new international economic order demonstrated in their speeches that the atmosphere of intimidation by the so-called Washington Consensus, according to which the only thing that exists is what is acceptable to Wall Street and the City of London, is past now past history.
Chinese Foreign Minister Wang Yi announced, after a separate meeting of the foreign ministers of the five BRICS members (Brazil, Russia, India, China, South Africa), that they will step up the process of cooperation in the political, economic, and scientific arenas, as agreed in Fortaleza, Brazil, in July, and that they will also develop common strategies and solutions for the world’s most dangerous conflicts.
Brazilian President Dilma Rousseff, in her opening speech to the General Assembly, made it very clear where the root of these most dangerous conflicts is to be found, namely in the totally failed “Responsibility To Protect” (R2P) policy of Tony Blair and Obama, which has provided the pretext to flout the national sovereignty that is fully enshrined in international law. We have seen from the examples of Syria, Iraq, Libya, North Africa, and Ukraine, that the use of force is totally unsuited to eliminating the deep, underlying causes of conflicts, she said. Every military intervention has only aggravated these conflicts rather than bringing peace.
In the case of Libya, Rousseff continued, NATO abused the R2P concept to go far beyond the UN Security Council mandate and to bomb the country, arm the militias, and carry out regime change. All this only increased the terrorism, plunged the civilian population into chaos, and resulted in torture, kidnappings, rapes, illegal detentions, and executions. The BRICS countries see themselves as the counterpole, she said, to the old structures (the politics of globalization), which are unable to eliminate the dangers that threaten the entire planet.
Argentine President Cristina Fernández de Kirchner was just as explicit in her speech to the UN Security Council on Sept. 24, where she was sitting just two seats away from President Obama. She cited Pope Francis, that World War III has already started and the current policy has only resulted in permanent bloodshed. She highlighted the fact that just as Osama bin Laden, whom the United States originally promoted for the war against the Soviet Union, turned against the U.S. as soon as that war ended, so now those who a year ago were celebrated and armed as “freedom fighters” in Libya and Syria, with the aim of overthrowing the Assad government, have now joined the ISIS terrorists as sworn enemies of the United States.
The representatives of the BRICS countries stressed the successful policy of conflict resolution on the part of Egypt, under the leadership of President Abdel Fattah el-Sisi, who significantly furthered the peace process in the Middle East by mediating between the Palestinian factions, and who now is preparing to rebuild the Gaza Strip, which was reduced to rubble and ashes by Israel’s carpet bombing last Summer.

A totally different atmosphere was conveyed by many other participants in this year’s UN General Assembly, because the emergence of a global alliance of countries whose governments are no longer afraid to tell the truth about the failure of the policies of Washington and London, inspires optimism in anyone who is truly interested in solutions.
This new spirit was expressed in a remarkable speech by Chinese President Xi Jinping on the occasion of a conference on the 2,565th birthday of Confucius. Xi stressed how important it is to foster traditional Chinese culture, because culture is the very soul of a nation. Excellent traditional culture must be combined with the best of modern culture so that something new arises, he said. It is equally important to understand the strength and nature of other cultures, to understand the majesty, confidence, and strength of Chinese culture. Each nation must uphold its own thinking and culture, while at the same time understanding and respecting other cultures.
This message has unfortunately not yet reached the German government, from which so far not a word has been heard about Leibniz, Lessing, or Schiller. Instead, Finance Minister Wolfgang Schäuble allowed himself be quoted in full-page ads placed y the vulture funds and their lobby group American Task Force Argentina in the media, with hostile and false statements attacking Argentina. Thus has Schäuble placed himself on the side of those who are to blame for the wretched state of the world.
Fortunately, his political career will soon be at its end.
Translated from German by Susan Welsh
Would you like to like to have your own eClinik at home?
You can easily defeat cancer, AIDS and help your body cure all known and unknown illnesses without using drugs, at the comfort of your own home. This is our experience. Find out more about it here.
Every download of our eBook, Towards Healthcare Emancipation – Premium Edition, provides additional funding to our next project.
If you haven’t done so, please like our FB page to encourage others to learn more about our work.
Thank you very much for your valuable support. Mabuhay!