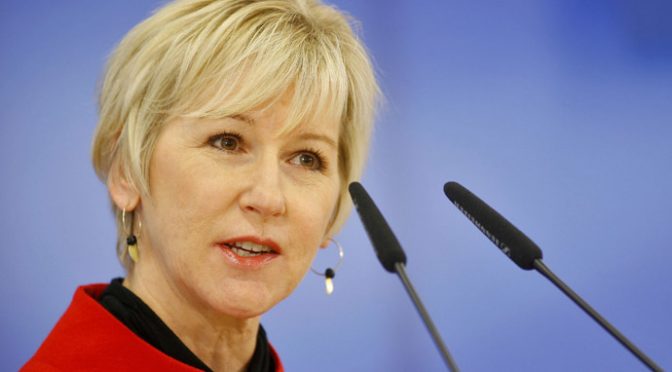 “… and US should not decide our internal policies.” These are the brave words of the female Foreign Minister of Sweden, Margot Wallström.
As each day passes, more and more personalities and countries are joining the bandwagon that shun the actions and policies of the United States and the Crown, risking reputations and lives in the process.

‘US won’t decide our policies’ – Sweden on Palestinian state recognition

Washington will not be the one to decide Sweden’s policies, Swedish Foreign Minister Margot Wallström said after the US criticized Stockholm’s plans to officially recognize Palestine as a sovereign state.
“It’s not the US that decides our politics,” Wallström said, adding that the new Swedish authorities expected to “get criticism” after their announcement on Palestinian statehood.
However, the minister stressed that Stockholm “will continue the constructive dialogue with the US to explain our motives and reasons for this,” Aftonbladet newspaper reported.
In his first speech before the country’s parliament on Friday, Prime Minister Stefan Lofven promised that Sweden will “recognize the states of Palestine.” READ MORE: Sweden to become first EU country to officially recognize State of Palestine
He added that the conflict with Israel “can only be solved with a two-state solution, negotiated in accordance with international law.”
If the initiative is approved by parliament, Sweden will become the first EU member to recognize Palestine as an independent state.
But Sweden’s plans were not welcomed by the US, Israel’s top ally, which warned the Scandinavians against rushing into things.
“We believe international recognition of a Palestinian state is premature,” US State Department spokesperson Jen Psaki said. “We certainly support Palestinian statehood, but it can only come through a negotiated outcome, a resolution of final status issues and mutual recognitions by both parties.”
She added that Israel and Palestine must be the ones “to agree on the terms on how they live in the future two states, living side-by-side.”
The Social Democrats gained power in Sweden during the general election in September, following eight years of conservative rule.
Prime Minister Lofven also promised to adjust Sweden’s foreign policy, which would include the country giving up on its aspirations to join NATO.
The Palestinian Authority is aiming to establish an independent state in the territories of the Gaza Strip and the West Bank, with East Jerusalem serving as the capital.
Israel captured both the West Bank and the Gaza Strip during the Six Day War in 1967.
East Jerusalem was later annexed as part of Israel’s indivisible capital, though this move has never been recognized internationally. Israel is also actively building settlements in the West Bank which are considered illegal by the UN.
Israel launched a 50-day military operation in the densely populated Gaza area this summer, which saw over 2,100 Palestinians – mainly civilians – killed and some 18,000 homes destroyed.
source »
Would you like to like to have your own eClinik at home?
You can easily defeat cancer, AIDS and help your body cure all known and unknown illnesses without using drugs, at the comfort of your own home. This is our experience. Find out more about it here.
Every download of our eBook, Towards Healthcare Emancipation – Premium Edition, provides additional funding to our next project.
If you haven’t done so, please like our FB page to encourage others to learn more about our work.
Thank you very much for your valuable support. Mabuhay!

One thought on “Palestine is A Sovereign State [Sweden]”