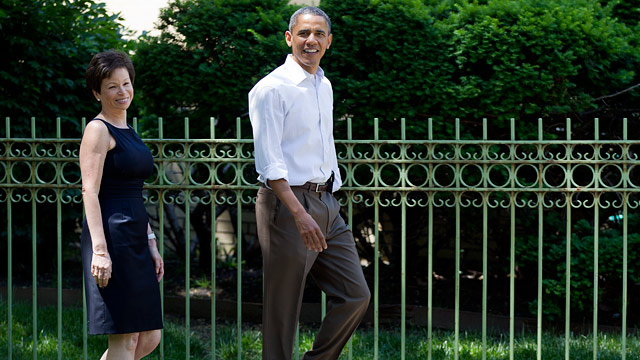 Fallout from the Obama administration continues as mainstream media began “complaining” about how the current administration is handling all issues by shifting blame on somebody else, i.e. Valerie Jarrett.
Every Jesuit puppet has its own handler, and in the case of the Obamas it’s Jarrett.

As the Obama Administration Crashes and Burns, Insiders Begin to Blame Valerie Jarrett

By John Fund, National Review
Are significant chunks of the mainstream media in despair over Barack Obama? This past week, Obama used 60 Minutes to attempt to shift blame for the failure to anticipate the rise of ISIS, endured a cover-up of White House security disasters by the Secret Service, and saw a government-agency report that he had skipped nearly 60 percent of his intelligence briefings.
The reaction from some longtime Obama defenders was swift and harsh. “President Obama this week committed professional suicide,” wrote former CNN host Piers Morgan, now an editor-at-large for Britain’s Daily Mail.
He called Obama’s throwing of the intelligence community under the bus a “shameless, reprehensible display of buck-passing” that will result in some analysts’ exacting “cold-blooded revenge on Obama by drip-feeding negative stories about him until he’s gone.” As for the Secret Service fiasco, Morgan said it was “no wonder the Secret Service gets complacent when The Boss exudes complacency from every pore.”
Read more at Nationalreview.com→

I Went Looking For Valerie And Found Gamaliel…

I was perusing Valerie Jarrett videos on YouTube and found one where she is giving a speech to ‘Realizing The Promise‘, a group a 2500 community organizers who went to Washington on 12.4.08 to speak with elected officials and shape the agenda for the congress and new administration.  When I watched the video above,  I realized that they have opened a #10 can of whoop ass and do not even realize it.

…understanding that ordinary people, when they come together around a common vision, with common goals, and common beliefs can do extraordinary things.

That statement sounds extraordinarily similar to the 9.12 Project and the upcoming March on Washington, D.C.
During the course of the research of one simple topic, many stepping stones have popped up to explore and this particular article could go on and on the way I am apt to do.  In the hopes of not boring my readers too much, I am going to keep this post to just a few topics; introductions to Valerie Jarrett, Gamaliel Foundation, and Economic Policy Institute.  For those of you that would like to watch the vids of the Realizing the Promise Forum on 12.4.08, you will find the links at the end of this post.
Now without further ado, Valerie Jarrett, (or as I like to call her, Obama’s second wife).
AKA Valerie Bowman
Born:14-Nov–1956
Birthplace:Shiraz, Iran
Gender: Female
Race or Ethnicity: Black [1]
Sexual orientation: Straight
Occupation: Business, Government
Party Affiliation: Democratic [2]
Nationality: United States
Executive summary: White House Office of Public Liaison
Tom Leonard, “Valerie Jarrett Leads Barack Obama’s Influential Black Advisers”, London Telegraph, 6 November 2008: “In one of his first appointments, Mr. Obama named Valerie Jarrett — an African American businesswoman, senior advisor and close family friend — as one of the leaders of his White House transition team.”
Treasurer for the Hopefund, Barack Obama PAC.
Husband: William Robert Jarrett (m. 1983, div. 1988, one daughter)
Daughter: Laura
High School: Northfield Mount Hermon School, Northfield, MA (1974)
Law School: BA, Stanford University (1978)
Law School: JD, University of Michigan Law School (1981)
Administrator: Trustee, University of Chicago
White House Staff Director, Office of Public Liaison (2009-)
The Habitat Company President and CEO (2007-09)
The Habitat Company EVP (1995-2007)
Illinois State Official Chairman, Chicago Transit Authority (1995-2003)
Illinois State Official Chicago Department of Planning and Development Commissioner
Illinois State Official Deputy Chief of Staff for Mayor Richard M. Daley
Illinois State Official Chicago Deputy Corporation Counsel, Finance and Development
Member of the Board of Chicago Stock Exchange (2000-07, as Chairman, 2004-07)
Member of the Board of Federal Reserve Bank of Chicago (2006-07)
Member of the Board of Navigant Consulting, Inc.
Member of the Board of USG (1998-)
Chicago Museum of Science and Industry Trustee
Carol Moseley Braun for President
Democratic Senatorial Campaign Committee
German Marshall Fund Board of Directors
John Kerry for President
Joyce Foundation Board of Directors
New Leadership for America PAC
Obama for America
Obama for Illinois

So…..of course I went over to Realizing The Promise’s website and found that the Gamaliel Foundation was a presenter of the 12.4.08 forum.  Enter Saul Alinsky (again).

The stated mission of the Gamaliel Foundation (GF) is “to be a powerful network of grassroots, interfaith, interracial, multi-issue organizations working together to create a more just and more democratic society.” Predicated on the notion that America is a land rife with injustice, GF agitates for social change by supporting the efforts of a network of organizations (the Gamaliel Network) whose goal is to allow for individuals to “effectively participate” in the political, environmental, social and economic arenas. GF offers, for its network affiliates, programs to teach techniques and methodologies for bringing about social change; ongoing consultations; and organizer recruitment campaigns.
The Gamaliel Foundation derives its name from the biblical figure who, according to the New Testament, chastised the Jewish Sanhedrin (rabbinical court) for wanting to give the death penalty to Jesus’s apostles. Says GF, “We work in the hope and the confidence that this work is of God.” GF was established in 1968 to support the Contract Buyers League, an African American organization fighting to protect homeowners on Chicago’s West Side who had been discriminated against by banks and lending institutions.
The Gamaliel Network receives much of its funding from the leftist group Catholic Campaign for Human Development (CCHD). Yet according to the Roman Catholic Faithful website, GF’s “goals and philosophies are at fundamental odds with Church teaching.” GF endorses “scriptural relativism“and “encourage[s] a wide range of scriptural interpretations.”
The Gamaliel Foundation models itself after the activism of the 1960s radical Saul Alinsky, who authored the books Reveille for Radicals (1946), The Professional Radical (1970), and Rules for Radicals (1971). Alinsky’s prescription for effective organizing consisted of the following elements: (a) Develop a “trade union in the social factory” to serve as a vehicle by which people in the neighborhood can bargain, strike, and struggle to advance their agendas; (b) create a power-oriented community organization willing to use militant, confrontational tactics; and (c) promote a democratic organization where organizers do not themselves lead, but rather develop local leaders so as to create the veneer of self-determination and grassroots democracy.
GF likens its own mission to that of the biblical apostle Paul. “In Corinthians,” explains GF, “Paul states, ‘I am Paul, a disciple of Gamaliel.’ Saul Alinsky made all of his organizers read the letters of Paul because he regarded his namesake to be one of the greatest organizers of all time.”
The Gamaliel Foundation takes a strong stand against current homeland security measures and immigration restrictions. In September of 2003, for example, Ana Garcia-Ashley, GF’s Director of Civil Rights for Immigrants, described the Patriot Act as an “attack on immigrants.” Moreover, GF seeks to persuade the U.S. government to “legalize and provide rights to tax-paying [illegal] immigrants in this country.” “We support any immigration legislation,” adds GF, “that secures the civil rights of all immigrants; leads to the legalization of undocumented persons; provides for full labor protection and labor rights of immigrants; ends the inhumane detention and warehousing of asylum seekers; ends deportation for minor offenses; encourages family unity; provides security of our borders; includes humane border enforcement policies; [and] protects the civil liberties of all people.”
The Gamaliel Foundation is a sponsoring organization of the Immigrant Workers Freedom Ride Coalition, which seeks to secure ever-expanding rights and civil liberties protections for illegal immigrants, and policy reforms that diminish or eliminate restrictions on immigration.
At its 2003 National Leadership Assembly in Milwaukee, GF assembled a large number of leftist religious leaders to launch a voter drive against the incumbent Bush administration. At the event, featured speaker Rev. Tommie Pierson of Metropolitan Congregations United stated that he looked forward to the sound “of furniture being moved out of the White House.” Also attending the event were Democratic Senator Russ Feingold and Democratic Presidential candidate and Progressive Caucus member Dennis Kucinich.
Gregory Galluzzo, a former Jesuit priest, is the Executive Director of the Gamaliel Foundation. In 1980 Galluzzo co-founded, along with his wife Mary Gonzalez, a Chicago Latino activist organization called the United Neighborhood Organization (UNO). Today, Ms. Gonzalez is the Gamaliel Foundation’s Director of Western Territory. UNO, also modeled after Alinsky’s methods, is known for using aggressive organizing and confrontational tactics to push for change.
The President of the Board of the Gamaliel Foundation is Ann Smith, who in 1985 became the first black female to win a statewide election in Illinois when she was voted onto the Board of Trustees of the University of Illinois.
The Gamaliel Foundation receives grants from the Bauman Family Foundation, the Public Welfare Foundation, the Carnegie Corporation of New York, the W.K. Kellogg Foundation, the Ford Foundation, George Soros‘s Open Society Institute, and others.
continue reading »
Would you like to like to have your own eClinik at home?
You can easily defeat cancer, AIDS and help your body cure all known and unknown illnesses without using drugs, at the comfort of your own home. This is our experience. Find out more about it here.
Every download of our eBook, Towards Healthcare Emancipation – Premium Edition, provides additional funding to our next project.
If you haven’t done so, please like our FB page to encourage others to learn more about our work.
Thank you very much for your valuable support. Mabuhay!