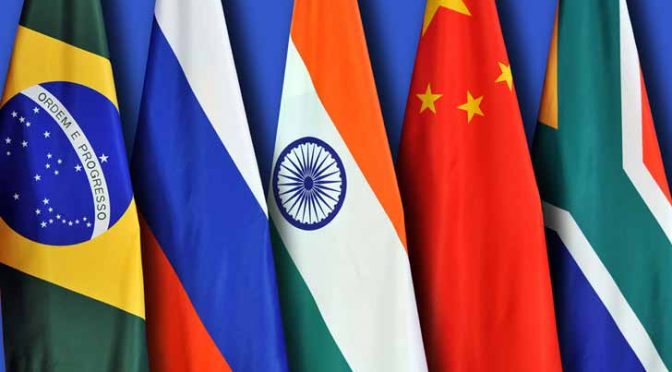 BRICS countries continue to make headlines and are gaining more allies along the way.
Four of the BRICS founding members are in the New Emerging G7 countries.

Russian officials are speeding up negotiations for Vietnam to join the Moscow-led Customs Union bloc, officials said on Monday. The inclusion of Vietnam in the group would reinforce President Putin’s drive to show Russia will not be isolated by Western sanctions.
The two countries will boost bilateral trade revenue to $7 billion in 2015 and $10 billion in 2020, said Doan Duy Khuong, vice chairman of Vietnam Chamber of Commerce and Industry (VCCI), on Monday. The two sides are also beefing up efforts to conclude negotiations on a free trade agreement, said the official at a Vietnam-Russia business forum held in Hanoi.
Russia expects Vietnam to soon join the Customs Union of Belarus, Kazakhstan and Russia as negotiations on the free trade agreement between the union and Vietnam is yielding much progress, Russian Foreign Minister Sergei Lavrov said in April this year.
“Russia attaches great importance to the traditional friendly relations with Vietnam and highlights the increasing role of Vietnam in the Asia-Pacific. Russia and Vietnam have the same viewpoints over many regional and international issues. Russia supports Vietnam’s active role in the Association of Southeast Asian Nations (ASEAN) as well as ASEAN’s role in establishing a new regional architecture,” said Lavrov.
In May this year, Russian President Vladimir Putin welcomed Kazakhstan and Belarus into a new Eurasian Economic Union, with a market of 170 million people, a combined annual GDP of $2.7 trillion and vast energy riches.
“In the past three years trade turnover within the Customs Union has gone up by 50 percent – that is by $23 billion (in 2013 it amounted to $66.2 billion). We also discussed the prospects for other partners joining the Union. We agreed to step up our negotiations, as I already said, with Vietnam on creating a free trade zone,” Putin said in a press conference following a Eurasian Council meet in Astana, Kazakhstan.
The agreement once signed will create breakthrough to realize the targets of bilateral trade revenues in 2015 and 2020, said the chief of the Vietnamese business body on Monday in Hanoi.
“In the past few years, Vietnam has been among countries in Asia-Pacific that Russia sets priorities in political and economic fields,” said Russian Ambassador to Vietnam Andrey G. Kovtun.
The Customs Union guarantees the free transit of goods, services, capital and workforces and coordinates policy for major economic sectors.
Russia is working with Vietnam on 12 big investment projects including the construction of the Ninh Thuan 1 nuclear power plant, oil and gas exploitation by Russia-Vietnam joint-venture companies on Vietnam’s continental shelf and Russian territories, and the expansion and modernization of Vietnam’s Dung Quat oil refinery factory.
Vietnam and Russia established diplomatic ties in 1950. In 2013, two-way trade turnover hit $4 billion, up 7 per cent year-on-year, while in the first seven months of 2014 the figure already stood at around $2 billion.
Meanwhile, the US continues to woo Vietnam as part of its much-hyped “Pivot to Asia”. The United States last week announced it was partially lifting a ban on lethal arms sales to Vietnam which was imposed in 1984.
source »

Chinese Premier Li Keqiang will co-chair the “China-Germany Governmental Consultation” in Berlin with German Chancellor Angela Merkel during his visit to Germany that begins on Thursday. The meet is aimed at drawing a new blueprint for Sino-German cooperation in economy, technology and environment protection.
Official figures say bilateral trade accounts for one third of the total China-EU trade volume. The Chinese Premier said last year that the two countries, the world’s top two exporters, could be an “economic dream team” and that Beijing was ready to open up new sectors of its economy to German investors.
From January to August this year, bilateral trade amounted to $117.3 billion, up 12 per cent year on year.
“The two countries are important markets for each other. We are making great efforts to transform our economic structure, change our development mode, and address environmental pollution. This will create a huge demand in the market of environment protection and energy saving. That’s where Germany has advantages,” said Chinese Ambassador to Germany Shi Mingde in an interview to Chinese state media ahead of Li’s visit.
A struggling euro zone economy has intensified the pressure on the German government to look towards Asian markets like China.
Germany had, earlier last year, come out in support of China during a trade dispute over the sale of solar cells and wireless equipment in Europe. Chancellor Angela Merkel had said in May last year that Germany would do everything it could to prevent the trade dispute from escalating to the point where the EC imposed the import duties on China.
The Chinese Premier had welcomed Germany’s call, saying it was because Berlin “wanted to hear” China’s stance. “This position, that is what binds China with Germany and earns my appreciation,” Li said.
China is keen on German investment in sectors like logistics, education and healthcare.
During her visit to China, earlier this year, Merkel oversaw Chinese and German companies inking a number of agreements, including buying helicopters from Germany, worth over $400 million and setting up a new automobile manufacturing base in China.
China is a giant market for German luxury cars and state-of-the-art machinery, while Chinese exports to Germany include textiles, electrical goods and toys.
Meanwhile, Li is also scheduled to attend the Hamburg Summit, the largest Chinese-European business meeting and an annual event.
source »

Analysis of a new IMF report projects the top seven emerging markets, measured at purchasing power parity (PPP), will overtake the conventional G7 group of industrialized economies in 2014.
TheFinancial Timesestimated that the seven largest emerging economies can hypothetically be called a new G7: four BRICS members – Brazil, Russia, India and China and three countries of the so-called MINT – Mexico, Indonesia and Turkey, will have a combined GDP of $37.8 trillion in 2014 when calculated at purchasing power parity (PPS). However, the long established G7 group of industrialized nations: Canada, France, Germany, Italy, Japan, the UK and the US are expected to have an output of $34.5 trillion.
The IMF World Outlook update showed that China is now the world’s largest economy in terms of PPP having surpassed the US. In terms of relative prices China’s output is forecast to soar to $17.6 trillion, which is above the $17.4 billion of the US.
continue reading »