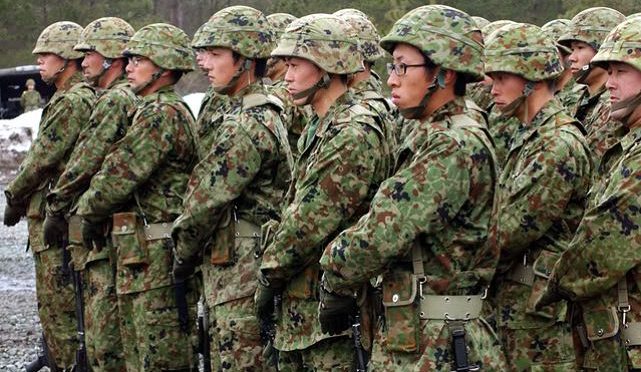 Considered a major historical shift, Japan is getting ready for war at the prodding of the White House.
After the Second World War, Japan Constitution disallow the use of its armed forces for offensive purposes. Under PM Abe, however, an army of unparalleled discipline is getting ready for deployment.

Japan and the United States have agreed to create a new defense partnership to counter their perceived threat of China. Tokyo has become more assertive in its military policy under Prime Minister Shinzo Abe, but this has led to protests at home.
The new pact will help to set out how Japan and the US will work together during various degrees of provocation, from peacetime, to when Tokyo may be under, or carrying out, an armed attack.
“The two governments will take measures to prevent the deterioration of Japan’s security in all phases, seamlessly, from peacetime to contingencies,” an interim report between the two countries stated, Reuters reported.
This is the first time the two countries have revised their bilateral security arrangements in 17 years and it can largely be seen as a response to increased Chinese military activity, especially in the East China Sea.
Tokyo and Beijing have been involved in a disagreement about a group of islands, which are currently controlled by Japan in the East China Sea. Their importance of the Senkaku Islands, as they are known in Japan, has grown, with the belief that there are oil reserves under the seabed. Members of the Japan Maritime Self-Defense Force (JMSDF) unload a patient from a UH 60 Seahawk in a Humanitarian Assistance and Disaster Relief drill aboard the JMSDF ship JS ISE, south of Oahu during the multi-national military exercise RIMPAC in Honolulu, Hawaii, July 12, 2014. (Reuters / Hugh Gentry)

In late September, Chinese President Xi Jinping called on China’s army to modernize and improve their combat readiness, so they could “win a regional war.”
“The headquarters of all PLA (People’s Liberation Army) forces should improve their combat readiness and sharpen their ability to win a regional war in the age of information technology,” Xi said at a meeting with the country’s military elite, China’s official Xinhua news agency reported.
In July, Japan changed part of its constitution to move away from its post-World War II pacifist stance and end the ban on its military operating abroad. The reversal of the relevant Article 9 in the Constitution now means that the Japanese military would have the capability to defend the US or other allies, if they were attacked. The new guidelines will also see Japan and the US cooperate in areas such as peacekeeping and maritime security.
“These revised guidelines will capture the greater scope of our alliance cooperation, reflecting its more global nature,” a senior US State Department official said on condition of anonymity, AP reported. However, not everyone domestically was pleased with Japan’s more assertive foreign policy. Tokyo was handed a lawsuit looking to block PM Abe’s move toward expanding the military and rescinding decades of pacifist non-alignment.
“I hope other Japanese people will follow suit and file legal actions nationwide,” former civil servant Tokinao Chindo told AFP. He said that the military expansion was contrary to Japan’s war-renouncing constitution.
One man was so incensed that he set himself on fire in protest. The activist was giving a speech in the capital Tokyo and after he finished addressing the crowd, he doused himself in what appeared to be gasoline and set himself ablaze in front of hundreds of onlookers.
Also, thousands of protesters gathered outside the Japanese PM’s residence, chanting: “Don’t destroy the Constitution,”“We absolutely oppose reinterpretation of the Constitution,” and “We don’t need the right to collective self-defense.” Critics say the change in the Constitution is a “historical turning point,” the Japan Times reported.

In September, talks took place between Tokyo and Washington about the possibility of the US providing Japan with offensive weapons in the future. Since his election on a radical nationalist program in 2012, Abe has reversed military spending cuts and eased curbs on arms exports, with the country’s defense budget rising to record levels.
Not surprisingly, the new defense pact between Tokyo and Washington has caused tensions with Beijing. Ahead of the report’s release, China issued a statement saying that the new guidelines should not interfere with its interests.
“The Japan-US alliance is a bilateral arrangement set up under specific historical conditions. It should not exceed its bilateral scope and should not harm the interests of third parties, including China,” Chinese foreign ministry spokesman Hong Lei said in the statement.
China has accused Abe of reviving World War II militarism, while there is a general feeling of unease amongst the general populations of the two countries as well.
A poll in September conducted in China and Japan by Genron NPO, a Tokyo-based nonprofit, showed that 53.4 percent of Chinese envisage a future conflict, with more than a fifth of those saying it would happen “within a few years,” while 29 percent of Japanese can foresee military confrontation.
Last year, 90 percent of Japanese respondents said they had a negative impression of China. This year that percentage has risen to 93 percent.
source »