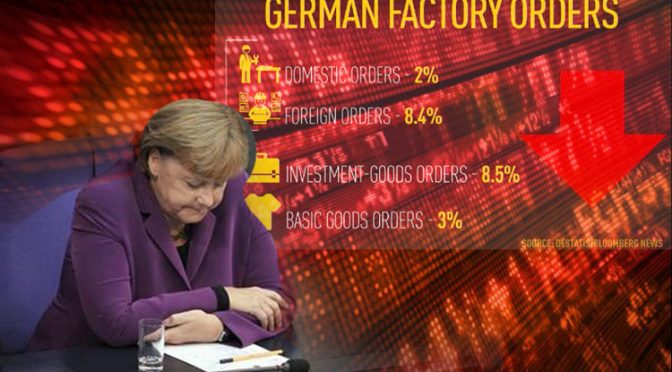 In his latest video update, Keenan reiterated the forgone conclusion that both euro and the dollar will cease to exist in the very near future.

So far the overnight session has been a mirror image of Monday’s, when futures languished at the lows only to ramp higher as soon as Europe started BTFD. Today, on the other hand, we had a rather amusing surge in the AUDJPY as several central banks were getting “liquidity rebates” from the CME to push the global carry-fueled risk complex higher, only to see their efforts crash and burn as Europe’s key economic events hit. First, it was the Eurozone Industrial Production, which confirmed that the triple dip is well and here, when it printed -1.8%, below the expected -1.6%, and far below last month’s 1.0%. This comes in the month when German IP plunged most since 2009, confirming that this time it’s different, and it is Germany that is leading Europe’s collapse into the Keynesian abyss not the periphery. And speaking of Germany, at the same time Europe’s former growth dynamo released an October ZEW survey of -3.6%, the 10th consecutive decline and well below the 0.0% expected: first negative print since late 2012!
Just as bad,the ZEW current condition print of 3.2, is once again below the 10 year average as Bloomberg notes:

The cherry on top was Zew’s Fuest saying he “can’t exclude a technical recession in Germany” which in turn led to another record low in Bund yields, a slide in the Dax to fresh 1 year lows, and a break in the carry-trading central banks’ concentration asthe US futures ramps was almost entirely undone.
In other news, Greek bonds are blowing out to levels not seen since May, crossing 7%, on the previously noted concerns the European Court of Justice could further defang the OMT, in the process unwinding 2 years of “whatever it takes”iness.
Finally, with earnings season now well underway, the first company to report today did so with a whimper when JP Morgan pre-released numbers, showing a miss on EPS (USD 1.36 vs. Exp. USD 1.39), even thought non-GAAP (yes, non-GAAP) revenues fared better than expected.
In Asia, besides the Nikkei (-1.5%), key indices in Hong Kong, Korea and Australia are +0.6%, +0.3%, and +1.0%, seemingly unaware that Europe would defeceate the bed once again. The bid for Treasuries remains firm with the 10yr yield down another 7bp to 2.21% in Tokyo. In Hong Kong, police have stepped up their effort to reopen the roads overnight by tearing down barricades and tents and have been met with no resistance. Elsewhere, the Asia iTraxx is 2bp wider wrapped around 121bp. The Dollar is weaker against key currencies and that is not helping the further slide in Brent either.
After yesterday’s sharp sell-off in US equities, it’s no surprise to see European cash markets also in the red, as a spate of poor earnings updates from SAB Miller, Burberry and Michael Page hit sentiment. US focus shifts to the slew of earnings releases today. Other large-cap earnings releases today include Johnson & Johnson with many on the street looking for the company to beat expectations due to performance in key drugs, with sales of Remicade expected at USD 1.72bln, Olysio at USD 768.8mln and Zytiga at USD 588.3mln.
In summary: futures are trying to get some carry currency to lift them higher even as the 10Year is printing at the unthinkable at the beginning of the year 2.21%, while the 30Year is solidly back under 3%, at a whopping 2.96%. Must be the recovery and great rotation everyone was talking about…
Bulletin headline summary from RanSquawk and Bloomberg: