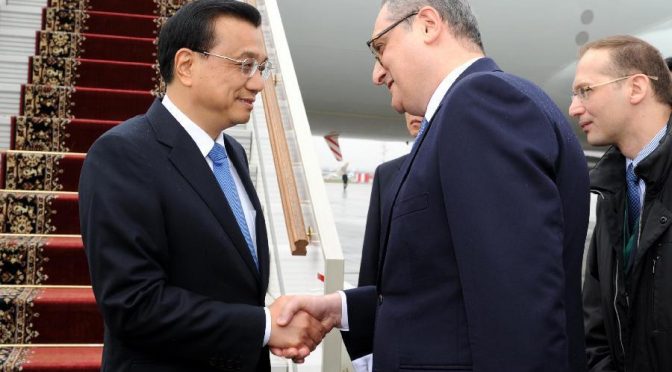 With regards to progress and development, there is no stopping for the BRICS. This massive partnership is based primarily on mutual respect and prosperity which is what the New Silk Road symbolizes.
The Eastern Alliance is more than ready and sincerely committed to finance the redevelopment of the planet, including the financing of massive rehabilitation of Western economies for as long as the purge of dangerous parasites is done as soon as possible.

Otherwise, they will be left behind.

China and Russia on Monday signed a memorandum of understanding (MOU) to jointly build 2 high-tech parks, one in each country.
The park in China will be located in the new town of Xixian Fendong in Shaanxi and will initially occupy four square kilometers. In Russia, 200,000 square meters of buildings will be built in the Skolkovo Innovation Center in Moscow, the Russian Direct Investment Fund said in a press release Tuesday.
Part of China’s revival of the “Silk Road”, the high-tech parks are being developed by the Russian Direct Investment Fund (RDIF), Russia-China Investment Fund (RCIF), the Skolkovo Fund, and the local government of northwest China’s Shaanxi Province.
RDIF said under the agreement RCIF and the local government of China’s Xixian will establish a joint venture for the construction of the parks.
Authorities expect to open satellite offices for the Chinese park in the Chinese cities of Beijing, Shanghai, Guangdong and Heilongjiang, while the Russian park will open offices in Kaliningrad, Vladivostok and the Russian republic of Tatarstan.
RDIF plans to help the Russian park attract high-tech companies from both countries and promote development of international companies within the parks.
RCIF is a private equity fund created by the RDIF and China Investment Corporation, two sovereign wealth funds.
Earlier on Monday, Chinese Premier Li Keqiang and his Russian counterpart, Dmitry Medvedev, witnessed the signing of about 40 agreements after holding the 19th China-Russia Prime Ministers’ Regular Meeting in Moscow. Medvedev described the agreements signed as representative of “the special character of the partnership”.
“We are interested in attracting Chinese investment into agrarian projects in Siberia and the Far East. In turn, as the world’s largest country with the biggest reserves of arable land we can supply China with food products, especially agricultural products,” Medvedev told his Chinese counterpart in Moscow.
Further consolidating the partnership, the two allies also signed a currency swap deal worth 150 billion yuan ($24.4 billion) between the central banks of China and Russia.
The Chinese Premier in Moscow also said Beijing will advance the establishment of a Eurasian high-speed transport corridor linking Beijing and Moscow, adding that the current priority should be the high-speed railway between Moscow and Kazan.
Source: Agencies

Russia and China have signed several multi-billion dollar deals on Monday, including nuclear energy, finance, tourism, high-speed railways, apart from the agreement on gas deliveries to China via the eastern route.
Chinese and Russian Premiers Dmitry Medvedev and Li Keqiang have held the 19th Regular Meeting of the Heads of Government in Moscow during which 40 inter-governmental agreements were signed.
The two allies have also signed a massive currency swap deal worth $24.4 billion. The agreement was inked between the People’s Bank of China (PBOC) and the Russian Central Bank on Monday “to facilitate bilateral trade and investment”.
The agreement lasts for three years and can be extended if both sides agree, the PBOC said on Monday in a statement on its website.
Beijing is keen on substituting the US dollar with the yuan in all of China’s trade with other countries. The Chinese currency now trades directly with the Japanese yen, the Australian dollar, the Brazilian real, the EU’s euro, the New Zealand dollar and many other currencies.
Meanwhile, the signing of the gas agreement on Monday in Moscow was a “pre-condition” for the entry into force of the $400 billion East Route natural gas deal to export 38 billion cubic meters of gas to China for 30 years, signed in May earlier this year between Russian state energy giant Gazprom and the China National Petroleum Corporation.
“Over the past six years, trade between Russia and China has almost doubled, from $40 billion to $90 billion,” said Medvedev.
Moscow is looking to increase trade and banking cooperation with Beijing, even as it battles new rounds of sanctions imposed by the EU and US over the Ukraine crisis.
During Li’s Moscow visit, Russia’s sanctions-hit banks Vnesheconombank, VTB, Rosselkhozbank have attracted financing by Exim Bank of China, Russian media reported. The European Union had earlier in July published a law to cut off financing for five major Russian banks over Moscow’s alleged support for separatists in eastern Ukraine.
On Monday, the Russian Federal Space Agency also signed an agreement with the Commission for the Chinese Satellite Navigation System on cooperation in global navigation systems.
The two sides also signed a deal on a $500 Million Financing mandate between Russia’s OAO MegaFon and the China Development Bank.
Meanwhile, Russia and China have also begun talks on building an additional natural gas pipeline to China via a western route.
“Russia and China may agree on Russian gas deliveries to China via the western route in 2015,” said Medvedev after his meet with Li.
In a meeting earlier on Monday with chairperson of the Russian Federation Council Valentina Matviyenko, the Chinese Premier said cooperation between the two countries “is developing for the benefit of our peoples and for the interests of ensuring stability on the planet and preserving peace in the region.”
Putin will meet the visiting Chinese Premier on Tuesday, said a Kremlin statement.
Putin said, earlier this year, that Russia-China ties “will significantly affect the contemporary architecture of international relations”.
“It is absolutely clear that we will be expanding collaboration with China. Our trade with the United States is 27.5 [billion], but trade with China is 87 billion, and it is growing. And experts will agree that China is gradually becoming the number one economic power. The question is when it will happen: in 15, 20 or 25 years. But everybody understands that it is inevitable,” asserted Putin.
In 2012, Putin included China in his first foreign trip after assuming the Russian presidency. Xi Jinping also chose Moscow as his first state visit as China’s head of state.
Would you like to like to have your own eClinik at home?
You can easily defeat cancer, AIDS and help your body cure all known and unknown illnesses without using drugs, at the comfort of your own home. This is our experience. Find out more about it here.
Every download of our eBook, Towards Healthcare Emancipation – Premium Edition, provides additional funding to our next project.
If you haven’t done so, please like our FB page to encourage others to learn more about our work.
Thank you very much for your valuable support. Mabuhay!