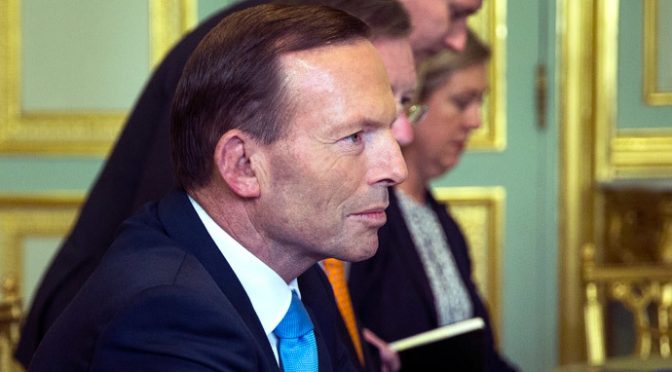 There are a lot of Australian guests on this site, in fact, they are our most avid supporters, and we’re sure they’re not happy with the man at the helm.
Australian Prime Minister Tony Abbott is reportedly planning to “shirtfront” Mr. Putin during the next month’s G20 summit in Australia. This undiplomatic remarks didn’t go unnoticed by the Russian embassy which advises the former to be very careful considering Putin’s Judo black belt 😉

He said he will be doing so on behalf of the Australians who died in Flight MH17. Well, we know who were responsible for the ill-fated flight [here].
This Abbott stunt may impressed his handler but not the country.

A Russian diplomat in Australia called the remark of Australian PM Tony Abbott about his intention to “shirtfront” Vladimir Putin “immature.” He reminded the Aussie politician that he might be “very fit” but Putin is “a professional judo wrestler.”
Abbot’s scandalous remark came on Monday after he told journalists that he is going to “shirtfront” the Russian president on the sidelines of G20 summit over the tragedy of the Malaysian airliner crash in the Donetsk Region of Ukraine in July.
“I am going to shirtfront Mr Putin – you bet I am – I am going to be saying to Mr Putin Australians were murdered, they were murdered by Russian backed rebels,” Abbott said.
Shirtfront is a football technique for a front-on chest bump or rough handling aimed at knocking your rival backward to the ground. It’s “a reportable offence and considered illegal,” says the Australian Football Rules website.
The Russian Embassy in Australia, however, didn’t let Abbot’s remark go unnoticed.
Third secretary of the Russian Embassy in Canberra, Aleksandr Odoevsky, told the Australian Associated Press that the remarks of the Australian PM were “immature.”

One thought on “Careless Abbott”