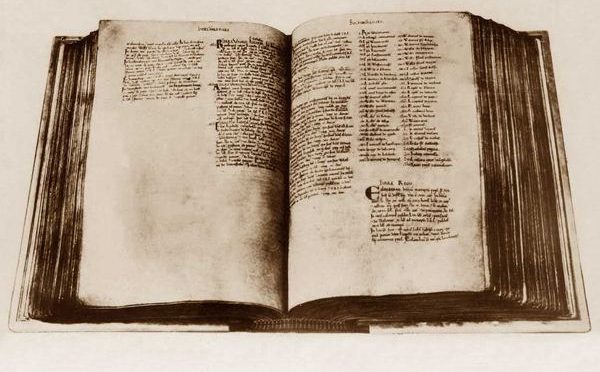 A few days ago, a purportedly secret “doomsday” book of the Federal Reserve came into light, and this is not good for those who have benefited greatly from the collapsing system.

This week, former heads of the Federal Reserve and U.S. Treasury converged on Washington to give testimony as to the monetary status of the economy and banking system.  During part of the more than six hours of testimony, the financial heads were asked about a secret and disturbing publication the Fed has in case of a sudden financial meltdown.  Known as the Doomsday Book, this document supposedly is a compilation of emergency measures the Fed has in place to deal with a major market meltdown, or another financial crisis.

During his more than six hours of testimony, Mr. Geithner’s was not the only book introduced. The other volume was the secretive compilation of the Federal Reserve’s legal powers, known internally at the central bank as the “Doomsday Book,” which has never been made public.

The “Doomsday Book” is essentially a private compilation of emergency measures that the Federal Reserve could take in the event of a financial crisis or other market-destabilizing event. The book has never been made public.
It’s existence of the book isn’t secret: Treasury Secretary Timothy Geithner references it in his recent financial-crisis book, “Stress Test,” calling it a catalog of “our actual firefighting equipment.”
But Fed officials have refused to release it, and Justice Department officials at a court hearing on Tuesday said the Federal Reserve Bank of New York wanted to keep the book under seal. – Wall Street Journal

It is well known that the Fed has the capacity to print trillions of dollars into existence at any given moment in the event of a serious financial crisis, but it would be interesting to see how they would fare if the crisis extended to nations and economies all around the world.  For now however, the specter of deflation is quickly raging throughout Europe, Japan, and even America, and if allowed to go too long, it will have devastating effects on the debt obligations each entity has, especially when it comes to to paying off or rolling over that debt.

Earlier this year we came to the realization that Quantitative Easing (QE) had reached the point of diminishing returns, where a new printed dollar adds nothing to the general economy and GDP.  And with QE and ZIRP continuing now several months after that critical nexus point for debt creation, the Fed better have some powerful tools in its Doomsday Book, otherwise the only Doomsday will be for the peoples in Europe, Japan, and America who will see their spending power crushed, and their economies collapsed in the next big crisis.
Kenneth Schortgen Jr is a writer for Secretsofthefed.com, Examiner.com, and hosts the popular web blog, The Daily Economist. Ken can also be heard Wednesday evenings giving an weekly economic report on the Angel Clark radio show.
source »

WASHINGTON, October 18, 2014 — After securing England as part of his realm, the Norman duke lived up to his moniker — William the Conqueror — and ordered that a record be made of all the possessions of his vanquished Anglo-Saxon subjects.
In 1085, William “sent men all over England to each shire to find out what or how much each landholder had in land and livestock and what it was worth … not even an ox, nor a cow, nor a swine was there left that was not set down in his writ. And all the recorded particulars were afterwards brought to him,” reads the Anglo-Saxon Chronicles.
Like a certain American president of craven ambition, William sought tax revenue and didn’t want his new subjects holding out on him.
The volume compiled by William the Conqueror’s medieval IRS is appropriately known as the “Doomsday Book” (usually spelled in the Middle English fashion, “Domesday”).
Many Americans might be surprised to hear that the United States has its very own version. Our Doomsday Book is a tightly held secret of our shadowy Federal Reserve. But some of its hush-hush contents may be revealed as a result of a class action lawsuit now underway in the U.S. Court of Federal Claims, which is within sight of the White House.
The court’s mandate, as stated on its website, reads, “In this Court the federal government stands as the defendant and may be sued by citizens seeking monetary redress.”
Leading the suit against the Fed is Starr International Company, Inc., an investment and charitable fund under the direction of Maurice Greenberg, founder and former CEO of mega underwriter American International Group (AIG). The Federal Reserve is the defendant. At issue is the Fed’s $182 billion bailout of AIG during the financial crisis of 2008.
Read more at http://www.commdiginews.com/politics-2/commentary/the-federal-reserves-secret-doomsday-book-28105/#3tMs67JZOlzhmdwu.99

Three separate versions of a secretive Federal Reserve Bank of New York manual known as the “Doomsday Book” were entered into court evidence under seal Tuesday as part of a classaction lawsuit by shareholders of American International Group Inc.AIG +2.75%


The “Doomsday Book” is essentially a private compilation of emergency measures that the Federal Reserve could take in the event of a financial crisis or other market-destabilizing event. The book has never been made public.
It’s existence of the book isn’t secret: Treasury Secretary Timothy Geithner references it in his recent financial-crisis book, “Stress Test,” calling it a catalog of “our actual firefighting equipment.”
But Fed officials have refused to release it, and Justice Department officials at a court hearing on Tuesday said the Federal Reserve Bank of New York wanted to keep the book under seal.
Mr. Geithner, appearing as a witness Tuesday at a U.S. Court of Federal Claims hearing on the lawsuit, briefly discussed his interactions with the book during a lengthy back and forth with David Boies, the lead attorney for Starr International, a major AIG shareholder.
Mr. Boies said he had obtained three copies of the Doomsday Book, likely under subpoena. One version of the book was published when Mr. Geithner was president of the Federal Reserve Bank of New York (referenced as Exhibit 7 during the trial). Another version (exhibit 651) was published in 2012, and – Mr. Boies said – he had also obtained a 2014 version of the Doomsday Book.
Mr. Boies was careful not to quote from any of the versions of the book or reveal specifics about what the books contained.
Mr. Boies casually mentioned that Mr. Geithner carried the book around with him during the financial crisis, to which Mr. Geithner quickly responded: “I don’t think I ever carried it around.” He added, “I was shown it at one point.”
“We did occasionally go back and consult it as things were eroding around us,” he said, though he added “I don’t think it would be fair to say I consulted it extensively during that period.” (In his memoir, Mr. Geithner mentions studying the book. “I was not particularly impressed,” he wrote.)
One reason he didn’t lean on the book, he said in his testimony, was because a lot of the emergency measures the Fed ended up using during the financial crisis were “outside the boundaries” of past government interventions and weren’t even in the Doomsday Book.
The exchange led to an unusual back-and-forth in the courtroom, as a Justice Department lawyer, Mr. Geithner’s personal lawyer, and Mr. Boies all stood and discussed with Judge Thomas C. Wheeler what could and couldn’t be said about the Doomsday Book.
Judge Wheeler instructed Mr. Geithner to answer questions but said to keep an eye on his personal lawyer in case “he starts jumping up and down.”
Later in the court hearing, Mr. Boies referenced the “Doomsday Book” again.
He described it as an index with a summary that was two-inches thick with references to a number of other materials, forms, and memos. He described the summary as “relatively modest” but said the entire book was “voluminous.”
source »

WASHINGTON, April 2, 2014 – New Fed Chair Janet Yellen has been trying to “humanize” the U.S. central bank’s message since she took over from former Chair Ben Bernanke. The Bernank himself tried to move the organization toward relative transparency during his term and away from its former Greenspanian opacity. Yellen, it seems, is trying to take it to the people, remarking that “The recovery still feels like a recession to many Americans.”
Well, hello Washington. Glad ya noticed your real constituency after six years of gifts to America’s reigning oligarchs.
Read more at http://www.commdiginews.com/business-2/yellen-the-recovery-still-feels-like-a-recession-13547/#ww7Z3judX4xfJ09l.99