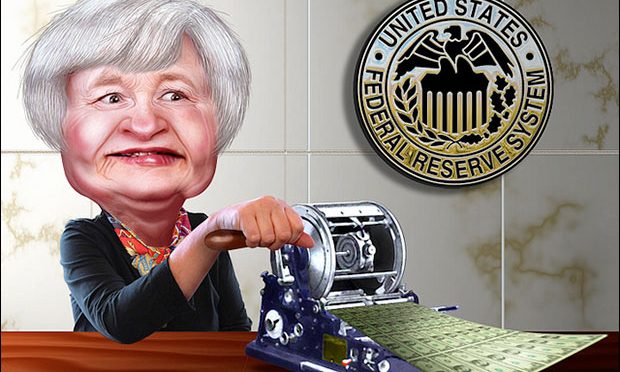 It’s comforting when mainstream journalists are still employing their gray matter, and forward candid analysis of the recent statement made by Federal Reserve’s new mouthpiece, Janet Yellen, about the widening gap between the suit and tie criminals and the mostly passive “We, the People”.

The Fed is deliberately stealing from savers

Yellen has created the wealth gap by printing money

Recently Janet Yellen expressed both concern and puzzlement over the rising wealth inequality in America.
I found her speech to be disingenuous and disturbing. Why? Because it is the Fed’s very own policies that are driving the expansion of the wealth gap. Read Yellen’s speech.
Either Yellen thinks we cannot be trusted with the truth (worrisome), or the Fed is clueless as to how its own policies operate (scarier).

The academic name for the Fed’s current policy is financial repression. But a more apt name would be “Throw granny under the bus,” because the program boils down to taking from savers and fixed-income recipients and transferring that purchasing power to other entities.
The cornerstone element of financial repression is negative real interest rates, of which the Federal Reserve is the prime architect and owner.
From the start of the Fed’s post-crisis intervention through 2013, the total cost of these negative real interest rates was over $750 billion just to savers alone. The loss of income to fixed-income investments (such as bonds held in pensions and money markets) was even larger.

It’s actually more appropriate to ask if the Federal Reserve is compatible with values rooted in our nation’s history.”

It’s actually more appropriate to ask if the Federal Reserve is compatible with values rooted in our nation’s history.
But here’s the rub. That loss of income and purchasing power didn’t just vanish. It was transferred from pocket A to pocket B.
It magically appeared again in record Wall Street banking bonuses, in shrinking government deficits (due to lower than normal interest rates), in rising corporate profits (mainly benefiting the already rich), in record stock buybacks (ditto), and in rising wealth inequality.
More directly, when the Fed buys financial assets with printed money and — by definition — drives up the price of those assets, it cannot then act mystified why the main owners of financial assets have grown wealthier. Doing so simply insults our intelligence.
With that as background, I found myself struggling to remain calm as I read Yellen’s recent remarks.

Federal Reserve Chair Janet Yellen on Friday expressed deep concern over widening economic inequality in the country and called for tackling issues such as early childhood education and encouraging entrepreneurship to help narrow the gap.
Comment: Did she really just deflect the consequences of the Fed’s policy of financial repression towards early childhood education? That’s like a burglar lecturing homeowners that they need to support better metallurgical research as the means of preventing their doors from being kicked in so easily in the future.
In a speech at the Federal Reserve Bank of Boston, Yellen said steady growth in inequality over the past several decades represents the most sustained rise since the 19th century. Living standards for most Americans have been “stagnant,” while those at the very top have enjoyed significant wealth and income gains, she said.
Comment: Glad the Fed finally noticed that those at the very top have been making out like bandits! This was something I said explicitly would happen as a consequence of future Fed printing back in 2008, before any QE had even started. How is it that I predicted that this would happen back in 2008 and the Fed is just now noticing? Is my one-man research department more capable than the entirety of the Fed’s? In fact this is a very well known and easy to understand process. That the Fed is feigning ignorance speaks volumes about how ignorant they believe we all are. This is a sure sign that we are trapped in a dysfunctional relationship with an abusive partner.
“I think it is appropriate to ask whether this trend is compatible with values rooted in our nation’s history, among them the high value Americans have traditionally placed on equality of opportunity,” Yellen said.
Comment: Once we accept that the Fed is openly and specifically creating the wealth gap as a matter of active and ongoing policy, which it is, then it’s actually more appropriate to ask if the Federal Reserve is compatible with values rooted in our nation’s history. The answer, if you believe in a level economic playing field, is “no.”
Yellen listed four factors that can influence economic opportunity: investing in education for young children, making college more affordable, encouraging entrepreneurship and building inheritance.
Comment: OMG. She just blamed the victims. According to Yellen, if people are finding themselves getting poorer what they need to do is stop scrimping on their kids, become an entrepreneur and go back in time and have rich parents somehow. This statement of hers calls for pitchforks and torches. Without a shred of decency, she has shifted all blame from the Fed to the victims. How corrupt or morally adrift does someone have to be to blame the victim? In a criminal case this would be used as evidence of sociopathic if not psychopathic behavior and be used by a prosecutor to call for a maximum sentence.
Yellen did not address in her prepared text whether the Fed has contributed to inequality.
Comment: No surprise there. Those who blame victims always avoid looking in the mirror.
At this point, based on Yellen’s testimony, I think it’s time to say what everybody is already thinking: if the Fed were an individual, we’d call its behavior pathological. Psychopaths blame their victims.
In a more evolved society than ours, Yellen would have been immediately booted from the stage, and the president would already be asking for her resignation. Sadly, she remains safely in charge, and utterly tone deaf.
We don’t need more lectures from her on our perceived failures to spend enough on our kids, have enough entrepreneurial talent, or have rich parents. What we need is a return to the level playing field that originally made this country great.

Chris Martenson is is an economic researcher and futurist specializing in energy and resource depletion, and co-founder of PeakProsperity.com.