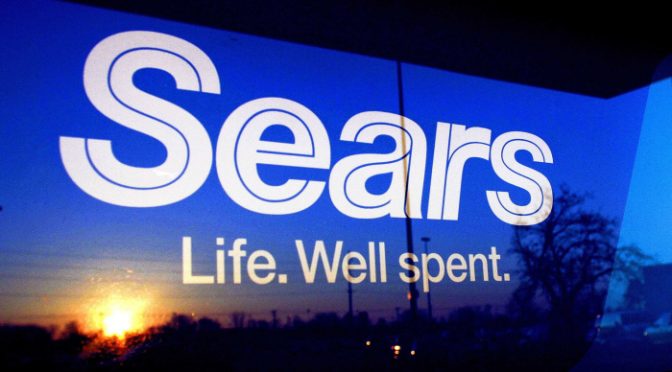 One of the biggest stores on the planet is closing hundreds of its branches… employees are claiming their store is actually operating under life support,and it’s just a matter of time before sunset.

Sears Canada to lay off more than 1,600 in latest cost-saving move

Sears Canada Inc. announced the layoffs of more than 1,600 employees late Wednesday, the latest cost-slashing move from the struggling department store chain as it tries to boost its operating performance.
The company, which has sold back the leases of prime stores to landlords to raise cash and has outsourced some IT, apparel design and finance positions in a bid to trim its bloated cost structure, has let go 283 employees in its logistics organization, effective immediately.
It will lay off another 1,345 over the next nine months from three internal customer contact centres, and has contracted that work out to third-party vendor IBM.
“These types of decisions are not made without considerable thought and deliberation,” Douglas Campbell, chief executive, said in a statement.
“We are planning for the future of Sears Canada and taking steps now that will allow us to continue serving customers as a viable national retailer coast to coast in stores and through our direct channel now and in the future.
continue reading »

Sears Canada to lay off 624 employees


Sears Canada Inc. has announced a round of layoffs for the second time this month, eliminating 624 workers.
The struggling company said Wednesday the cuts will help improve communication and encourage more consistency within its operations.
Most of the reductions will be in middle management at Sears department stores, affecting an average of five employees per location, Sears Canada said in a release.
The company also said it will rework its regional and head office structure to reflect the latest changes and to align it with the smaller business.
Two weeks ago Sears Canada said about 1,600 positions would be affected as it moved ahead with plans to shutter its three Canadian call centres and reduce staff at its warehouses.
Sears Canada is trying to reduce costs and improve its overall business as part of a three-year turnaround plan. Last year, the company made a similar round of cuts that has lowered its overall employee count to around 20,000 people.
continue reading »

13 hours ago
(Reuters) – Sears Holdings Corp (SHLD.O) is shuttering more than 100 stores and laying off at least 5,457 employees, investor website Seeking Alpha reported on Thursday, indicating the struggling retailer may be stepping up store closures.

Sears said in August it had closed 96 stores in the six months since February and planned to close a total of 130 underperforming stores during the full fiscal year. It added at the time that it may shutter additional stores beyond the 130 target.

Sears spokesman Chris Brathwaite declined to comment on the number of planned closures, saying the company would provide an update when it reports quarterly earnings next month. Reducing operations to the best performing stores is key to Sears’ revival strategy, he said.

“While this has resulted in store closures where appropriate – decisions that we do not take lightly – we continue to have a substantial nationwide footprint with a presence in many of the top malls in the country,” Brathwaite said.

Sears is closing stores to cut costs as it shifts to an “asset-light” business model. The company lost nearly $1 billion during the first half of the fiscal year in a downturn that has worried some vendors and prompted a series of moves by the company to generate cash.

On Monday Sears said it would raise as much as $625 million through an unsecured loan and equity warrants, about half of which will be purchased by Chief Executive Eddie Lampert and his hedge fund. It was the company’s third fundraising in a little over month.

It also said on Monday that it would lease seven stores to discount fashion chain Primark for an undisclosed amount, reflecting its effort to use generate rental income from better performing retailers.
Sears had 1,077 Kmart stores and 793 Sears stores in the United States as of Aug. 2. The company had 226,000 U.S. employees as of Feb. 1.

(Reporting by Sruthi Ramakrishnan in Bangalore and Nathan Layne in Chicago; Editing by Kirti Pandey and Richard Chang)

Gary Strauss, USA TODAY 4:30 p.m. EDT October 23, 2014
Cash-strapped Sears Holdings rose 4.5% to $35.95 Thursday following a report that it plans to close 116 Sears and Kmart stores and lay off nearly 6,100 employees, many ahead of the Christmas shopping season.
Seeking Alpha, a financial news and market tracker, cited liquidation sale notices sent out last month that will lead to the closure of 55 Kmart stores, 30 Sears department stores and 31 Sears Auto Centers.
Many of the stores are in Pennsylvania, Michigan and Indiana, according to Seeking Alpha, but closures are also set for stores in Alabama, California, Florida, Illinois, Iowa, Kansas, Kentucky, Maryland, Maine, Minnesota, Missouri, Montana, New Jersey, New Mexico, New York, Ohio, Vermont, West Virginia and Wisconsin.
Sears shares surged 23% after the company announced Monday that it planned to raise $625 million in a debt rights offering to raise cash and lease seven Sears store locations to European retailer Primark. Under CEO Edward Lampert, who’s also the company’s largest shareholder, Sears has lost nearly $1 billion this year.
After cutting nearly 100 stores in the first half of 2014, the company had nearly 800 Sears stores and 1,100 Kmart stores.
In an email to USA Today, Sears spokesman Howard Riefs said the store count and closures “isn’t accurate,” but did not provide store closures or layoff numbers.
continue reading »