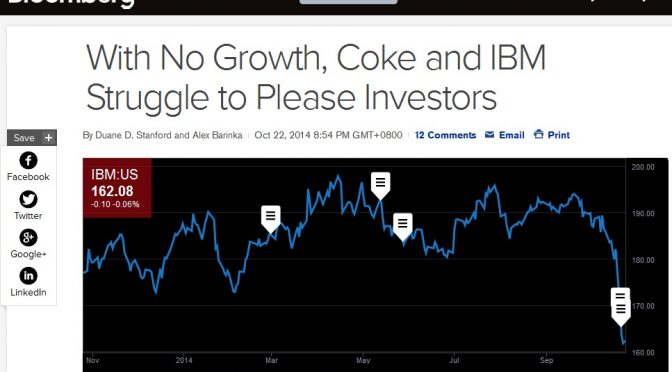 Sears and Walmart before it are struggling. And so are other big companies, too.

With No Growth, Coke and IBM Struggle to Please Investors

By Duane D. Stanford and Alex Barinka Oct 22, 2014 8:54 PM GMT+0800
Coca-Cola Co. (KO) and International Business Machines Corp. (IBM) got a stark message from investors this week: If they can’t keep their businesses in growth mode, they’d better do something about it — and fast.
Shares of both Coca-Cola and IBM fell more than 6 percent this week following their respective earnings, underscoring failings in their strategies. In Coca-Cola’s case, investors want deeper cost cuts and assurances that the savings will reward shareholders. For IBM, it’s the opposite: After years of financial maneuvering to fund buybacks and dividends, investors want good old-fashioned sales growth.
Both businesses are under increasing pressure after years of sluggish demand for their products. IBM and Coca-Cola are in the bottom fifth of the Standard & Poor’s 500 Index in terms of quarterly sales growth. Five years into a U.S. expansion — with the unemployment rate down to a six-year low of 5.9 percent — shareholders are looking for more dramatic remedies from companies that aren’t sharing in the economic gains.
“If your portfolio isn’t really capable of generating top-line growth, clearly either management needs to change or the business mix needs to change,” said Pete Sorrentino, senior vice president at Huntington Asset Advisors Inc. in Cincinnati. “Because that’s what investors are paying for.”

IBM’s shares tumbled 7.1 percent to $169.10 on Oct. 20, when the Armonk, New York-based company released disappointing results and backed away from its long-stated earnings goal for 2015. The stock fell an additional 3.5 percent yesterday, marking its worst two-day decline since the depths of the recession in November 2008. Coca-Cola’s earnings sent its stock down 6 percent to $40.68 yesterday, the biggest one-day drop since October 2008.
Coca-Cola and IBM’s share slides have wiped out more than $2 billion from Warren Buffett’s stock portfolio this week, assuming he hasn’t changed his holding in either since June 30. His firm, Berkshire Hathaway Inc. (BRK/B), is the largest investor in both companies and he has publicly supported the strategies of the CEOs. He didn’t respond to a message seeking comment left yesterday with an assistant.

Coca-Cola, the world’s largest beverage maker, is struggling with slower international growth and mounting concerns over obesity and artificial sweeteners in the U.S. Sales in the third quarter declined to $11.98 billion from $12 billion a year earlier, the Atlanta-based company said yesterday. Analysts had estimated $12.1 billion on average, according to data compiled by Bloomberg.

Chief Executive Officer Muhtar Kent has responded to the slowdown with a plan to cut expenses by $3 billion a year by 2019. Investors wanted more, said Ali Dibadj, a New York-based analyst at Sanford C. Bernstein & Co. Shareholders also aren’t sure how they’ll get a payoff from the goal, he said. Coca-Cola has said that the savings will be used to fund marketing, expand profit margin and increase returns on invested capital.
“What we do with my team is to try to control what we can control and execute flawlessly and implement the plan that we have outlined,” Kent said on a conference call after being asked about investor critics. “We have outlined very bold and aggressive plans for cost cutting.”
IBM, meanwhile, has spent $19 billion buying back its shares in the past 12 months. The strategy may have reached its limit, though.

Now that earnings growth has also slowed, investors are no long satisfied with IBM’s sales, which fell more in the most recently reported quarter than 93 percent of companies in the S&P 500, according to data compiled by Bloomberg.
James Sciales, a spokesman for IBM, didn’t respond to requests for comment.
IBM has said that revenue declines are a byproduct of streamlining the business. The company has been divesting unprofitable units to help boost earnings, getting rid of revenue that CEO Ginni Rometty calls “empty calories.” Besides plying investors with stock buybacks to lift earnings per share, Rometty has slashed expenses by lowering the company’s tax rate and cutting jobs.
IBM’s steady increase in income had been praised by investors like Buffett. Net income has tripled since 2002.
Then this week, IBM reported its 10th straight decline in revenue and had to scrap a five-year profit forecast, telling investors that annual adjusted earnings would fall this year for the first time since 2002.

While investors had called for a return to revenue growth in the past, they had been placated by consistent returns from IBM’s legacy units like services and software. Sales in those businesses tumbled last quarter, raising additional concerns, said Toni Sacconaghi, another Bernstein analyst.
“The company’s growth initiatives are not big enough or growing fast enough to offset the secular pressures facing its traditional businesses,” he said in an Oct. 20 note to clients.
Sorrentino, the money manager at Huntington, sees a broader shift in investor attitudes. Shareholders may not be as accepting of companies that aren’t growing organically, he said.
“There should be winners and there should be losers, and the winners should be the ones generating organic growth and the losers should be the ones misspending shareholder capital,” he said. “Hopefully this leads to that. These changes are never smooth and never pleasant.”
(An earlier version of this story was corrected to remove IBM’s share buyback ranking in the 11th paragraph.)
To contact the reporters on this story: Duane D. Stanford in Atlanta at [email protected]; Alex Barinka in New York at [email protected]
To contact the editors responsible for this story: Sarah Rabil at [email protected]; Nick Turner at [email protected] Nick Turner

NEW YORK (TheStreet) — Microsoft’s (MSFT) new CEO Satya Nadella announced, this morning, as many as 18,000 employees will be facing layoffs in the coming year in the largest restructuring move in the company’s 39 year history.

In a memo sent to all employees, Nadella said that because Microsoft had to incorporate thousands of professional and factory workers with the acquisition of Nokia’s cell phone business, that Microsoft will need to restructure with the first 13,000 being eliminated by the end of the calendar year. Nadella said, “the vast majority of employees whose jobs will be eliminated will be notified over the next six months.”

Previously, Microsoft’s largest round of layoffs was in 2009 when it reduced its workforce by nearly 6,000 positions.

Following the announcement, Microsoft stock was gaining more than 3% to $45.49 in early New York trading. TheStreet’s Julie Cerullo has details on the layoffs:

FBR Capital Markets analyst Daniel Ives noted that the cuts were necessary, and will allow Microsoft to become more competitive, particularly around cloud and mobile. “As expected, it appears the vast majority of the cuts will be around Nokia, while we also believe Nadella is using this as an opportunity to cull some of the non-strategic areas at the company as Microsoft needs to be a “leaner and meaner” technology giant over the coming years in order to strike the right balance of growth and profitability around its cloud and mobile endeavors,” Ives wrote in an an analyst note.

The company also announced that it expects to incur pre-tax charges of $1.1 billion to $1.6 billion over the next four quarters. That will include $750-to-$800 million in severance and benefit costs as well as $350-to-$800 million for asset-related charges.

In a phone interview, BGC Partners analyst Colin Gillis speculated what the job cuts will mean for next week’s corporate earning numbers. He said the company’s fourth quarter results are usually quite strong, and worried whether the announced layoffs might cause this year’s 4Q numbers to be what he termed “lumpy.”

Microsoft will report fiscal fourth-quarter earnings on July 22. Analysts surveyed by Thomson Reuters expect the company to earn 60 cents a share on $23.04 billion in revenue.