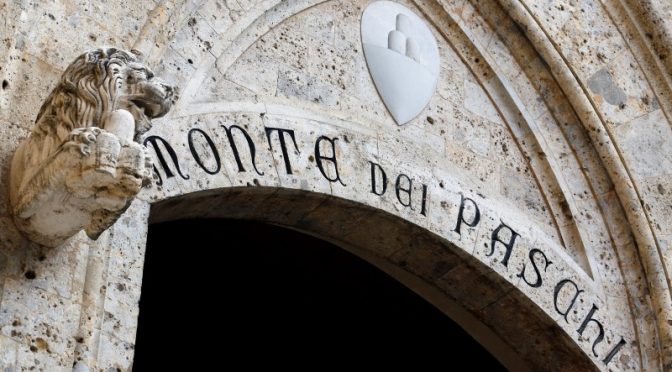 However the Western media may sugar coat it as always, the European economy is still very much in the red. They just lack the liquidity to sustain the Ponzi Scheme they have been doing for centuries.

The European Central Bank is testing banks under its wings for integrity and 25 of them failed, like so:

By Jeff Black Oct 27, 2014 2:00 AM GMT+0800
Twenty-five lenders including Banca Monte dei Paschi di Siena SpA failed a stress test led by the European Central Bank, which found the biggest capital hole in the region’s banking system in Italy.
The Frankfurt-based institution identified a total gap of 25 billion euros ($32 billion) as of the end of 2013, most of which has now been raised by banks. Among lenders still in need of funds, Italy’s Monte Paschi (BMPS) and Banca Carige SpA (CRG) must find a combined 2.9 billion euros between them, the ECB said today.
“The capital shortfall is at the lower end of expectations,” said Jon Peace, a banking analyst at Nomura Holdings Inc. in London. “It was always going to be a challenge for the ECB to convince the market of its credibility if it was going to be a small number which failed and capital to be raised.”
None of Europe’s largest banks were found lacking. No French, German or Spanish institutions were required to find more capital. Lenders found to be deficient now have as many as nine months to fill gaps identified by the ECB, which is aiming to close the door on half a decade of financial turmoil in the euro region.
The results, on first impression, are “very positive” and should benefit some bank stocks tomorrow, JPMorgan analysts wrote in a note. Deutsche Bank AG, Commerzbank AG, Erste Group Bank AG and Greek bank shares are among those which should react positively.

The ECB’s exercise comprised of a stress test and an Asset-Quality Review of balance sheets as of Dec. 31, 2013. It was conducted in tandem with the London-based European Banking Authority, which also released results today. The EBA’s sample largely overlaps the ECB’s, though it also contains banks from outside the euro area.
The assessment follows repeated attempts to weed out weaknesses across the region’s banking system. In 2010, seven lenders failed out of 91 that took part in stress tests with a capital shortfall totaling 3.5 billion euros. A year later, after the EBA took responsibility for the examinations, eight out of 90 banks failed with a combined gap of 2.5 billion euros. This year’s assessment is the first formal round since those exams in 2011.

The ECB’s health check showed banks in President Mario Draghi’s home country of Italy are in particular need of more funds as they cope with bad loans and the nation’s third recession since 2008. Monte Paschi, Italy’s third-biggest bank, Banca Carige and two other smaller cooperative lenders have a combined 3.3 billion-euro gap that must be replenished because the measures taken this year weren’t sufficient, ECB data show.
Italy’s finance ministry said in a statement that they’re “confident that the residual shortfalls will be covered through further market transactions and that the high transparency guaranteed by the Comprehensive Assessment will allow to easily complete such transactions.”
Of the 13 banks that the ECB identified as not having enough capital, two Greek ones were exempted because their repair plans are already in progress.

In Portugal, Banco Comercial Portugues SA was found to have a shortfall of 1.15 billion euros, according to the ECB. Even so, that bank said in a statement today that it has raised enough capital this year to cover the gap.

Italian lenders were buffeted by the stress test, suffering a hit to capital of 35.5 billion euros, followed by French banks with 30.8 billion euros. German banks would see capital reduced by 27 billion euros in the stress scenario, the report said.
Under the simulated recession set out in the assessment’s stress test, banks’ common equity Tier 1 capital would be depleted by 263 billion euros, or by 4 percentage points. The median CET1 ratio — a key measure of financial strength — would therefore fall to 8.3 percent from 12.4 percent.
The simulated scenario was too lenient because it didn’t incorporate deflation in southern Europe, said Hans-Werner Sinn, president of Munich-based Ifo Institute. That explains why the capital shortfall was so small for many banks, he said in a statement.
Nouy has said that banks will be required to cover any capital shortfalls revealed by the assessment, “primarily from private sources.”