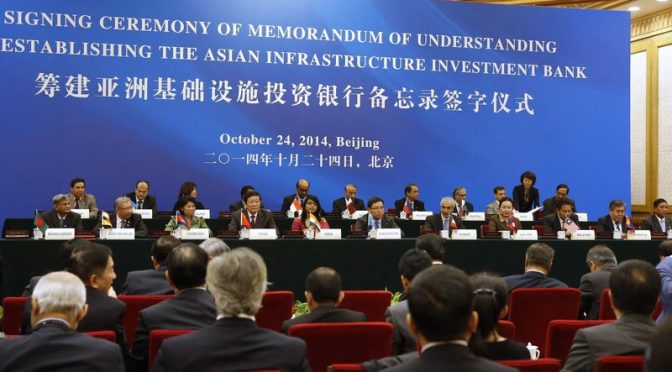 October 26, 2014, 5:12 am
Emerging economic powers such as China, India and Brazil have long been demanding greater share of votes in multilateral development institutions like the World Bank, International Monetary Fund and the Asian Development Bank to reflect their recent phenomenal growth. China’s economy is expected to grow to $10 trillion this year, yet its share of votes in the Bretton Woods institutions is only 3.72 percent, compared with 17.4 percent for the United States.

The existing situation is frustrating for emerging economies, because less voting power means less say in deciding where funds from these institutions should go. Also, most developing countries are unhappy with the unfair conditions imposed on them by the Western powers.
Unwilling to accept the status quo and answering critics, especially the US, that have long argued that China assume greater global responsibilities in areas like climate change and arms proliferation, President Xi Jinping surprised his Indonesian hosts during a state visit last year by initiating the formation of the Asian Infrastructure Investment Bank.

While the framework and modus operandi of the proposed bank are still to be finalized, its need is beyond doubt. According to ADB, in the 10 years up to 2020, the region requires investments of $8 trillion in terms of national infrastructure, or $800 billion a year. The ADB currently lends out only about 1.5 percent of this amount. Therefore, additional funding from the AIIB would be welcomed by the developing countries in Asia.
The AIIB is expected to have an initial capital base of $100 billion. Given that the ADB tripled its capital base from $55 billion to $165 billion only in 2009, the AIIB will start life with about two-thirds of the expanded capital base of the former.
From China’s point of view, such a bank makes perfect sense. A major feature of China’s miraculous economic rise has been its emphasis on infrastructure development. In the 20 years from 1992 to 2011, China spent nearly 8.5 percent of its GDP on infrastructure – corresponding figures for other Asian countries were between 2 and 4 percent.
The AIIB, to begin with, will serve at least five objectives for China. First, it could help China invest part of its foreign exchange reserves of $3.9 trillion on commercial terms. Second, it will play a vital role in the internationalization of the yuan. Third, it will help secure contracts for Chinese companies and thus boost employment opportunities at home. Fourth, China has funded many infrastructure projects across the world through the China Development Bank and Exim Bank, some of which have created resentment among local people. Funds from a regional development bank will ensure that there are no resentments. And fifth, the AIIB will boost China’s global influence and enhance its soft power.
Indeed, Xi’s proposal has ruffled some feathers, especially in Japan and the US, for these countries stand to lose some of their power and influence. Tokyo and Washington have worked together to maintain the power structure in the 67-member ADB where they each hold 15.7 percent of votes, against a paltry 6.5 percent by China.
Reports indicate that the US is pressuring Australia and South Korea not to join the AIIB. But as Hedley Bull, eminent late Oxford professor, once said, “people have friends but countries have only interests”. Thus Australia, India and South Korea will decide whether or not to join the bank based on their national interests.
China has considerable experience in infrastructure planning and construction, and financing projects outside the country. As Finance Minister Lou Jiwei has said, China Development Bank’s commercial infrastructure loan is now far bigger than that of the World Bank and ADB combined. And surprisingly, this process started only 20 years ago.
China has often been accused of lending funds to developing countries without taking into consideration good governance, and environmental and social safeguards. Projects in China have often suffered from similar shortcomings. Although China is learning fast how to overcome the shortcomings both at home and abroad, its presence in the developing world has been positive even with the shortcomings.
Some critics argue that the AIIB will reduce the environmental, social and procurement standards in a race to the bottom. This is a childish criticism, especially because China has invited other governments to help with funding and governance.
The AIIB is a win-win proposition for everyone. For the developing countries in Asia, it will be a new source of funding. For China, it will be a channel to strengthen soft power and enhance economic benefits. For the ADB and the World Bank, it will be a challenge to perform better and undertake reforms, which are long overdue.
This article first appeared in China Daily.
source »
Would you like to like to have your own eClinik at home?
You can easily defeat cancer, AIDS and help your body cure all known and unknown illnesses without using drugs, at the comfort of your own home. This is our experience. Find out more about it here.
Every download of our eBook, Towards Healthcare Emancipation – Premium Edition, provides additional funding to our next project.
If you haven’t done so, please like our FB page to encourage others to learn more about our work.
Thank you very much for your valuable support. Mabuhay!