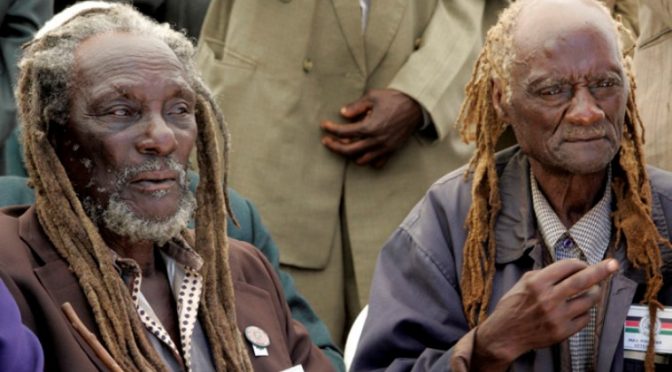 This is another headache for the Queen’s royal mind.
The Empire is slowly being brought down by one of the very tools that enslave us all, i.e. the Admiralty Court.

Over 41,000 Kenyans have waged an attempt to sue the British government for compensation, alleging maltreatment and physical abuse during a Mau Mau uprising in the 1950s against UK colonial rule.
The litigation suit, launched at the high court in central London, marks the second Mau Mau case against the British Foreign and Commonwealth Office (FCO) in recent years.
In 2010, UK legal firm Leigh Day successfully sued the British government on behalf of Kenyans who rebelled against UK colonial rule in the 1950s. The UK government paid £19.9m to 5,228 Kenyans in 2013 who were reportedly tortured by Britain’s colonial administration during the revolt.
The compensation was a watershed moment for the people of Kenya, signaling the British government’s first formal acknowledgement of serious mistreatment and abuse carried out during the UK colonial establishment’s tenuous withdrawal from the East African state.
Commenting on the landmark 2013 payout, former Foreign Secretary William Hague told MPs the monetary settlement was “full and final.” But the Guardian reports a group of UK law firms are currently dealing with a new tide of claimants – and in certain cases sending their legal staff to Kenya.
The latest case, firms suggest, is a collective litigation order involving in excess of 41,000 Kenyans. The high court is set to hear 25 separate test hearings according to official court documentation filed in May, the newspaper reported on Wednesday.

As distinct from the first Mau Mau action against the FCO, the most recent claims relate to a broader array of human rights violations than physical torture alone.
Claimants are also seeking compensation for alleged imprisonment on false grounds, as well as allegations of coercive labor and breaches of the fundamental right to education.
The claimants’ lawyers told the Guardian that January 2016 has been earmarked as a preliminary date for the trial. A spokesperson for the FCO declined to comment on the litigation suit, emphasizing it is not the body’s policy to openly discuss “a case that is going through the courts.”
The latest claims relate to alleged offences committed in 1952, when UK colonial governor, Sir Evelyn Baring, attempted to topple a growing anti-colonial insurgency dubbed Mau Mau. As the insurgency battled for an independent Kenyan state over the following eight years, approximately 90,000 Kenyans perished.

‘Inhumane and degrading treatment and torture’

Over 1 million were forced to leave their homes and enter detention facilities, which Kenya’s then-attorney general Eric Griffith-Jones described as disturbingly “reminiscent of conditions in Nazi Germany or communist Russia.”
While some of those detained were Mau Mau insurgents, many were innocent civilians trapped in an oppressive web of collective punishment. Members of the Kenya Mau Mau freedom fighters association gather to witness the official unveiling of a bronze statue monument of their hero Dedan Kimathi in Nairobi February 18, 2007. (Reuters/Antony Njuguna)

Simon Myerson QC, who is representing the claimants, told the Guardian his clients were forced to endure a variety of severe abuses during the uprising such as castration. Claimants are seeking compensation on a person-by-person basis, which ranges from £1,000 to £150,000.
Other lawyers representing Kenyan claimants allege Britain’s colonial government devised a deplorable system of inhumane and degrading treatment and torture to which thousands of Kenyans were subject throughout the revolt.
As a result of this scheme, Britain may be liable for abuse enacted by an array of local Kenyan agents under tacit UK orders. In particular, abuse enforced at the highest levels of Kenyan office by UK colonial powers may render Britain responsible for atrocities committed by Kenyan police and other state officials, lawyers say.
Although the FCO has not yet filed its defense, the Guardian has seen a document detailing the government body’s informal position on the allegations, supposedly dated 6 September 2013. In it, the FCO reportedly rejects responsibility for the colonial administration’s actions.
Alluding to the first Mau Mau litigation suit, the FCO allegedly says the claims brought in this second case “are conspicuously weaker.”
In 1960, Kenya’s crisis waned and the controversial Mau Mau detention camps were shut down. In London, little emerged at the time on what had transpired during Kenya’s Mau Mau insurgency.
“If we are going to sin,” Kenyan attorney general Griffiths-Jones wrote in a 1957 memorandum, “we must sin quietly.”
source »
Would you like to like to have your own eClinik at home?
You can easily defeat cancer, AIDS and help your body cure all known and unknown illnesses without using drugs, at the comfort of your own home. This is our experience. Find out more about it here.
Every download of our eBook, Towards Healthcare Emancipation – Premium Edition, provides additional funding to our next project.
If you haven’t done so, please like our FB page to encourage others to learn more about our work.
Thank you very much for your valuable support. Mabuhay!