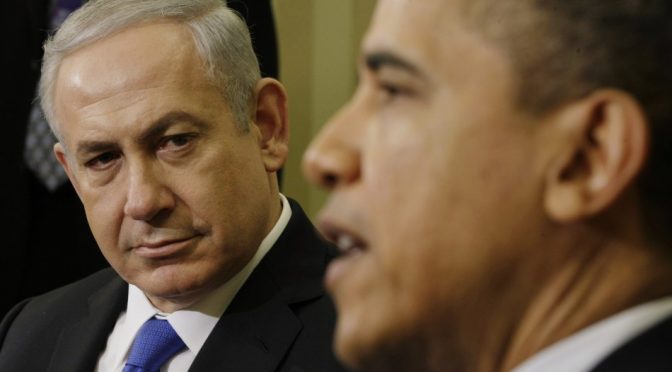 Is there really a crisis between the Obama administration and Bibi Netanyahu?
The thing about politicians is that they always make earthshaking statement on Election Day.

The Crisis in U.S.-Israel Relations Is Officially Here

The Obama administration’s anger is “red-hot” over Israel’s settlement policies, and the Netanyahu government openly expresses contempt for Obama’s understanding of the Middle East. Profound changes in the relationship may be coming.
Jeffrey Goldberg Oct 28 2014, 2:52 PM ET

Not friends at all (Reuters )

The other day I was talking to a senior Obama administration official about the foreign leader who seems to frustrate the White House and the State Department the most. “The thing about Bibi is, he’s a chickenshit,” this official said, referring to the Israeli prime minister, Benjamin Netanyahu, by his nickname.
This comment is representative of the gloves-off manner in which American and Israeli officials now talk about each other behind closed doors, and is yet another sign that relations between the Obama and Netanyahu governments have moved toward a full-blown crisis. The relationship between these two administrations— dual guarantors of the putatively “unbreakable” bond between the U.S. and Israel—is now the worst it’s ever been, and it stands to get significantly worse after the November midterm elections. By next year, the Obama administration may actually withdraw diplomatic cover for Israel at the United Nations, but even before that, both sides are expecting a showdown over Iran, should an agreement be reached about the future of its nuclear program.
The fault for this breakdown in relations can be assigned in good part to the junior partner in the relationship, Netanyahu, and in particular, to the behavior of his cabinet. Netanyahu has told several people I’ve spoken to in recent days that he has “written off” the Obama administration, and plans to speak directly to Congress and to the American people should an Iran nuclear deal be reached. For their part, Obama administration officials express, in the words of one official, a “red-hot anger” at Netanyahu for pursuing settlement policies on the West Bank, and building policies in Jerusalem, that they believe have fatally undermined Secretary of State John Kerry’s peace process.
continue reading »

Quotes from senior Obama administration figures damn Israeli prime minister as ‘chickenshit’ over stance on settlements and peace with Palestinians
US relations with Israel have plunged to new depths of bitterness and hostility as senior officials in the Obama administration decried Binyamin Netanyahu as a “chickenshit prime minister”, “coward” and a man more interested in his own political survival than peace.
The furious assessment delivered in anonymous but no-holds barred comments in an interview with the American journalist Jeffrey Goldberg in the Atlantic underline a state of anger with Netanyahu that is characterised as “red hot”.
The remarks are particularly telling in having been made to Goldberg, a Washington insider who has interviewed both Obama and Netanyahu, and who warned US-Israeli relations were in a “full-blown crisis” that could only get worse after the midterm elections.
Speaking to the Israeli parliament – the Knesset – a few hours after the comments were revealed, Netanyahu angrily insisted he was “under attack simply for defending Israel”, adding that he “cherished” Israel’s relationship with the US.
“When there are pressures on Israel to concede its security, the easiest thing to do is to concede,” he said. “You get a round of applause, ceremonies on grassy knolls, and then come the missiles and the tunnels.”
The Obama officials’ comments underline the dismal state of relations between the Obama administration and Netanyahu after a series of damaging announcements by Israel – including again this week – regarding its determination to push ahead with settlement building in occupied East Jerusalem and the West Bank.
The temperature of relations plunged again last week when Israel’s defence minister, Moshe Yaalon, was pointedly snubbed by senior administration officials during a visit last week to Washington, which itself followed a public warning from the White House that Israel risked alienating its “closest allies”.
Despite the deepening frustration in Washington, Netanyahu continued to hit back over the latest settlement announcement, saying US criticism was “detached from reality”, even on the eve of the publication of the latest remarks.
“The thing about Bibi is, he’s a chickenshit,” said one official quoted in the Atlantic. “The good thing about Netanyahu is that he’s scared to launch wars. The bad thing about him is that he won’t do anything to reach an accommodation with the Palestinians or with the Sunni Arab states.
“The only thing he’s interested in is protecting himself from political defeat. He’s not [Yitzhak] Rabin, he’s not [Ariel] Sharon, he’s certainly no [Menachem] Begin. He’s got no guts.”
continue reading »
Would you like to like to have your own eClinik at home?
You can easily defeat cancer, AIDS and help your body cure all known and unknown illnesses without using drugs, at the comfort of your own home. This is our experience. Find out more about it here.
Every download of our eBook, Towards Healthcare Emancipation – Premium Edition, provides additional funding to our next project.
If you haven’t done so, please like our FB page to encourage others to learn more about our work.
Thank you very much for your valuable support. Mabuhay!

One thought on “Bibi's A Chikenshit! [US Official]”