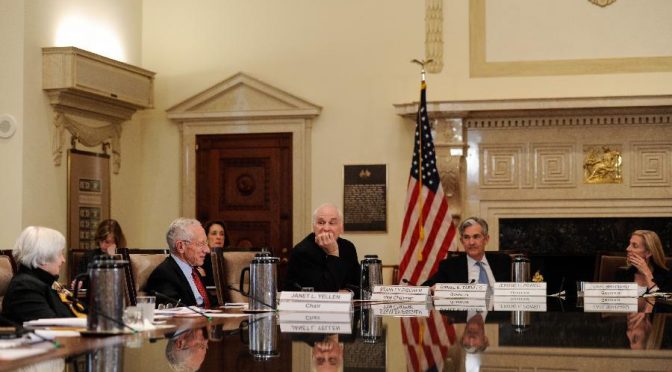 Are we now looking at the gradual phasing out of the Monster from Jekyll Island?
After the rare publicly opened board meeting last October 22nd, in which the Federal Reserve announced better economic indicators, e.g. lowering unemployment, it has officially stopped buying bonds known as Quantitative Easing. 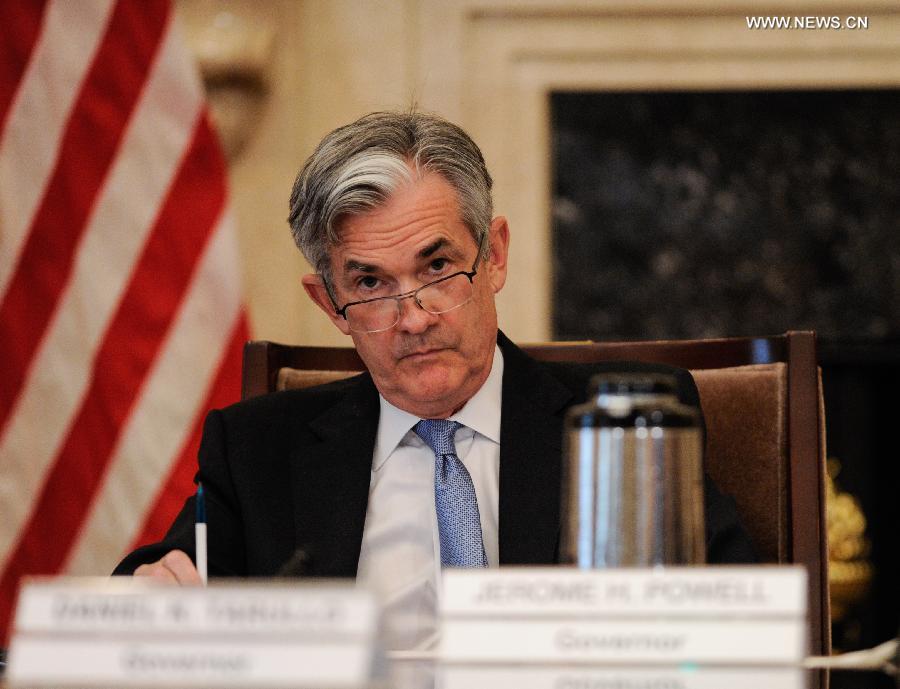 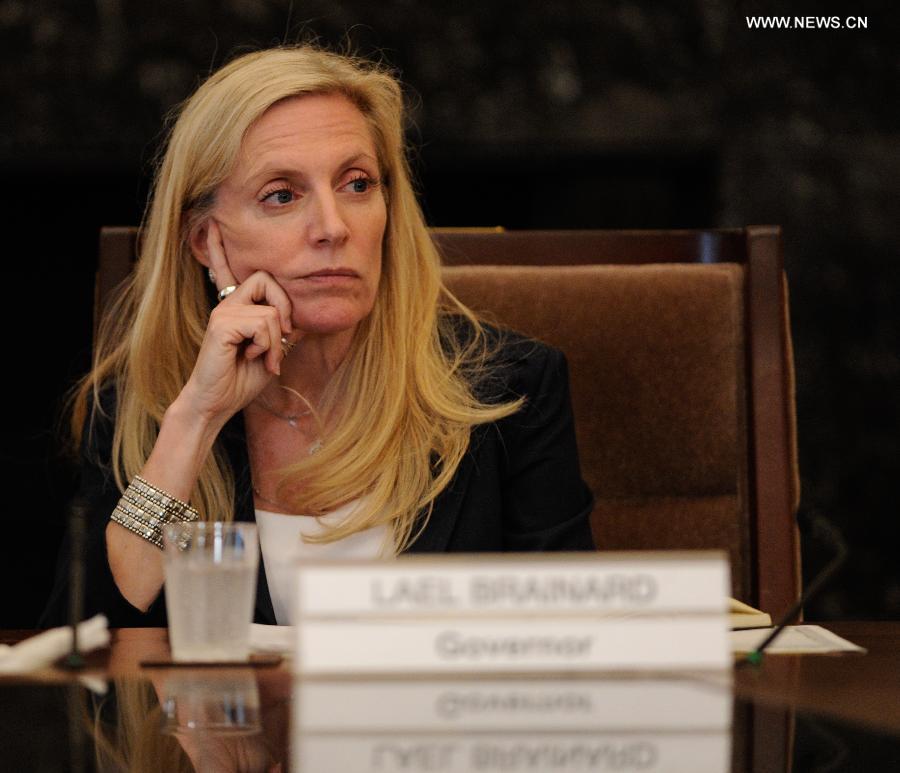 These are not happy faces.
Are they tired of printing paper money? Or, someone just told them to stop that silly practice as the world has turned to trading in yuan, ruble and other sovereign currencies?
Stock prices are falling. QE Eulogies are tweeting 😉

The end of QE may usher in an era of uncertainty, volatility

NEW YORK (MarketWatch) — Trading without a safety net. This is the prospect the U.S. stock market faces as the Federal Reserve is widely expected to put the kibosh on its six-year old stimulus plan, known as QE, or more formally Quantitative Easing.
Despite the widely-telegraphed nature and gradual unwinding of QE, some analysts are warning that ending billions of dollars worth of stimulus will also tap the brakes on the stock market’s recent rise.
continue reading »

Putting The Fallacy Of QE Into Perspective

Submitted by Mark St.Cyr,
You can’t turn on a financial news program without being bombarded by panelists as well as the hosts ready-at-the-draw to pounce on anyone with an opposing view as to the “effectiveness” of the Federal Reserve’s quantitative easing program (QE).
Once again this played out just the other day on CNBC™ where this time it was Peter Schiff who found himself in the cross hairs of today’s version of “ambush the guest.”
You can agree or disagree with anyone’s viewpoint and I even encourage people to question mine if they see fit. However, you don’t have to be a rocket scientist to watch many of these anchors to witness for yourself what now has turned into all the appearances of – an ambush.
And the recurring foil used to defend their attack? (paraphrasing but it’s the gist) “You’ve been wrong about monetary policy for if you were invested in this market, you would be making money. And those who have listened to you have missed out. So won’t you now admit you were wrong?!”
Schiff wasn’t the first nor will he be the last and can defend his own calls and does so. But no one on these shows cares. And this is clearly visible for all to see in these exchanges.
You hear calls of “Admit it!, Admit it!” over and over again as someone is trying to clarify a position. Clarify in the real sense of the word. Not obfuscate it as the hosts or other “guests” are trying to imply by shouting over them.
It’s now gone from amusing to watch, to down right pitiful. Many times I’m left watching these hosts channeling that old quote, “Do you have no shame?”
I believe this shoe now fits a few too many feet today. And many of them can’t get the boot quick enough in my opinion.
So let’s put a little perspective on this whole thing we now know as QE and shed some light on the “brilliance” and the “understanding” of monetary policy that many of these so-called financial show hosts state they know so much about.
First: What great economic reason would they give that stopped the Dow 30K narrative in its tracks to then watch it plummet wiping out all the gains of 2014 – to then reverse and edge back towards the “Never before seen in the history of mankind highs?”
There was only one: Federal Reserve Bank of St. Louis president James Bullard. Period.
All one has to do is look at a chart for proof. Chart Courtesy of ZH from the article: Chart of the day: Bullard Bull#*t

What more about monetary policy gone wrong does one need to know than to look at that one chart and see for oneself. Proof, that the policies we once knew as “monetary” have been so adulterated that the charts are now the equivalent of pornographic pictures.
Maybe what we really need is for all these charts to be bound in some magazine with an “adult advisory label” affixed to it. At least it would be more of a true descriptor than what we are told it is: “The picture of a real economic recovery.”
But in reality it goes a lot deeper than this. It is absolutely lost on nearly everyone exactly just how much money the Fed has really injected into the system with nearly nothing to show for but a stock market so fragile: a non voting FOMC member can shake its foundation sending it tumbling wiping out a years worth of gains in days. Then, just by reversing that statement reinstate it back to its lofty highs.
And the statement? (paraphrasing) “QE should end” “QE should continue.”
Sorry things like that don’t happen in a market based on true economic principles and activity. That only happens when you have a sham of a market.
Remember, the Fed has injected into the market nearly 4 Trillion dollars. That’s $4,000,000,000,000.00
To put this into perspective I wrote back in December of 2013 an article that brings into focus exactly what we’re talking about here.
Imagine if for the same amount of money we had done the following.
(Just to be clear – this is not an endorsement. It was only an exercise as a thought experiment for you need “big things” to really appreciate just how “big” these numbers truly are.)
From the article in December 2013: Perspective Is Needed More Than Just Numbers

“In just 3 years the Federal Reserve has pushed into the financial markets via the QE programs the equivalent in dollar amounts to have purchased 510 B-2 Stealth Bombers, 72 Nimitz Class Air Craft Carriers, 120 Ohio Class Submarines. and I still have nearly 2 more years of money to appropriate where ever or for what ever I desire. i.e., Two TRILLION is still in my pocket left to spend. QE and its equivalents are now nearing 5 years.
I still have plenty left to buy the aircraft, to man them or, the missiles to outfit them. Heck, that’s just if I stop here. So far there is no indication the Fed. is going to stop and there’s also talk that the new Chairperson might be inclined to spend more!
Maybe we should add a few M1 Abrams tanks just for the fun of it. They’re about $7 Million a piece so we can get Oh let’s say TWELVE  THOUSAND a month. Yes that’s 12,000 per month or One Hundred Forty Four Thousand (let that number sink in – 144,000) in a year. Sounds like a bargain when I state it that way doesn’t it? And I would still have a Trillion left if they stopped printing today.
But here’s the real crux of this argument and why I stated it as such. Sure it’s a little hyperbole and the math is not exact. We would never do now nor would anyone ever approve of such a plan. However, think of where GDP and the economic output as to where it would be today as to employ the talent needed to build those marvels. The engineers, the skilled labor, the steel, the copper, the mechanized equipment, the hotels, restaurants, and more to feed those that just supply the day labor, never mind the industrial backbone of supply that would be needed and more.”

As far as what we have to show for all this spending at the end of QE this month? Who knows, but I do know – we didn’t even get a lousy T-shirt.
source »

WASHINGTON (MarketWatch) — The Federal Reserve won’t be able to exit from its accommodative monetary policy without some turmoil in financial markets, former U.S. central bank chairman Alan Greenspan said Wednesday on the eve of an interest-rate decision.
During an appearance at the Council of Foreign Relations in New York, Greenspan was asked if the Fed could engineer an exit without sparking a crisis.
Greenspan said he didn’t like the word “crisis” but that “turmoil” was a good substitute.
Then he replied, “I don’t think it is possible.”
Interest rates have been kept near zero since December 2008. Fed members say they expect to raise interest rates next year.
Also see: Here is when Fed officials see liftoff in interest rates
The former Fed chairman declined to say when the Fed should hike short-term interest rates.
The Fed on Wednesday is expected to announce it will stop buying bonds. Greenspan said that the Fed’s quantitative easing has failed in one of its goals to spur demand.
Inflation is “dead in the water” because effective demand is “dead in the water,” he said.

NEW YORK (MarketWatch) — A tremendous amount of words have been penned about the Federal Reserve’s bond-buying stimulus program. But can you distill its essence into 140 characters?
The central bank’s so-called quantitative easing measures remain controversial, even as the Fed finishes winding down the program this week. Some say it failed to boost the economy and instead increased inequality. Others say it helped stave off a much more catastrophic economic scenario.
With that in mind, we collected some short-form eulogies for the controversial program. The only condition: they be no longer than the length of a tweet.

This week we say goodbye to QE, or Quashing Equality for the uninitiated.

@BenEisen QE will go down as one of the largest financial experiments ever. And it might take yrs to see the true effects. QE4 anyone?

Restart when? RT “@wesbury: Tapering will end today. QE will be over. Yawn. Big yawn. It never did what everyone thought it did.”

@BenEisen @MarketWatch Markets crashed, then came cash with a splash from the central bankers with a stash called QE, it's all gone now RIP.

@BenEisen @MarketWatch like a good Irish wake, it's time to say goodbye but keep the party going.

@BenEisen Fear of a fall once gripped us all. QE gave us hope, Dow Jones rope-a-dope. From ashes of QE rises price discovery. #circleoflife

@MarketWatch @WSJ O Chairman! My Chairman! Our fearful trip is done. Easing weather'd every wrack Recovery we sought is won

Reports of my death are greatly exaggerated @BenEisen: Seeking some 140-character-or-less eulogies for QE. Gimme the best you got

@BenEisen @MarketWatch Both your supporters and critics are happy you are gone – obviously, for totally different reasons.

@ryangiraffe @BenEisen @MarketWatch Whether tis nobler for the Market to Suffer, the Slings and Arrows of outrageous interest rates.