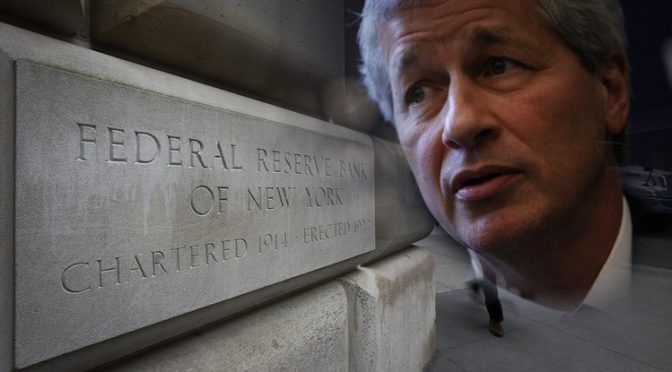 The Federal Reserve Board of Governors in Washington, D.C., which functions as the central bank of the United States, has farmed out much of its Quantitative Easing (QE) programs to the Federal Reserve Bank of New York since the financial crisis of 2008. The Federal Reserve Bank of New York has, in turn, contractually farmed out a hefty chunk of the logistics of that work to JPMorgan Chase in the last six years.
Sitting quietly on the Federal Reserve Bank of New York’s web site is a vendor agreement and other documents indicating that JPMorgan Chase holds all of the Mortgage Backed Securities (MBS) that the New York Fed has purchased under its various Quantitative Easing programs. As of last Wednesday, that figure was $1.7 trillion dollars. (The New York Fed has confirmed that JPMorgan is custodian for these assets.)
In addition to holding the MBS, JPMorgan also has a contractual agreement to exercise discretion (its own judgment) in trading the surplus cash that sits in the New York Fed’s cash account. While JPMorgan is restricted to holding collateral backed by U.S. government securities for these cash trades in Repurchase Agreements, its approved list of counter parties include global banks variously charged with rigging the international interest rate benchmark known as Libor, money laundering, aiding and abetting tax evasion, and defrauding clients.
During the period in which JPMorgan has been the trusted custodian of a major part of the assets of the U.S. central bank, it has been repeatedly charged with serial crimes. In January of this year, JPMorgan paid $2.6 billion and made history in being the first Wall Street mega bank to be charged with two felony counts and receive a deferred prosecution agreement. The crime was aiding and abetting the Madoff fraud – the largest Ponzi scheme in the history of modern finance. In September of last year, JPMorgan settled its London Whale scandal for $920 million in penalties. That case involved its use of depositors’ savings to gamble in exotic derivatives in London, lose at least $6.2 billion of those deposits, and initially misstate the amount of losses to its regulators.
There has also been a stream of other charges and settlements by JPMorgan for rigging electric rates, abusing credit card customers, and rigging Libor. According to press reports, another charge and settlement is ahead involving the rigging of foreign currency exchange trading – potentially as soon as this month.
The contract between the New York Fed and JPMorgan (located here under “Vendor Agreements – Agency Mortgage Backed Securities Purchase Program”) is a textbook study in the mushrooming conflicts evolving from the New York Fed being a regulator of Wall Street banks while simultaneously needing their help to conduct open market operations to carry out monetary policy for the nation.
In the case of the QE assets, the contract designates the New York Fed as JPMorgan’s “customer,” adding another incestuous twist to the relationship Wall Street banks have with their regulator. The conflicts which the New York Fed must tolerate, as a customer handing over $1.7 trillion of its assets to JPMorgan, are breathtaking. Here’s a partial list:
“Customer acknowledges that Bank [JPMorgan Chase] or its Affiliates may have a material interest in transactions entered into by Customer with respect to the Accounts or that circumstances are such that Bank may have a potential conflict of duty or interest. For example, Bank or its Affiliates may…
“act in the same transaction as agent for more than one customer…
“earn profits from any of the activities listed herein…
“Customer further acknowledges that Bank or its Affiliates may be in possession of information tending to show that the instructions received may not be in the best interests of Customer but that Bank is not under any duty to disclose any such information.”
continue reading »

Alan Greenspan To Marc Faber: “I Never Said The Fed Was Independent”

arc Faber, editor of “The Gloom, Boom & Doom Report”, spoke with Bloomberg TV’s Trish Regan today at length on a wide variety of topics. He commented on Bill Gross’ remarks about deflation (noting “the concept of inflation and deflation is frequently misunderstood”) and explained why he thinks Japan is engaged in a Ponzi Scheme (since “all the government bonds that the Treasury issues are being bought by the Bank of Japan”). He also spoke on oil prices (warning that “if oil prices went lower, it may actually have an adverse impact on the US economy”), gold and Goldman Sachs (“Goldman Sachs is very good at predicting lower prices when they want to buy something”) and the midterm elections (adding that “I don’t think it really matters, [both parties] have blown money away.”) But it is discussion of the independence of the Fed with Alan Greenspan that will raise the most eyebrows as it seems yet another conspiracy theory dies at the hands of the fact police.
*  *  *
TRISH REGAN: Bond investor Bill Gross is saying deflation is a “growing possibility” as governments worldwide struggle to create inflation and to stimulate growth. In his second investment outlook since joining Janus Capital, Mr. Gross writes, “The real economy needs money printing, yes, but money spending more so. Until then, deflation remains a growing possibility, not the kind that creates prosperity but the kind that’s trouble for prosperity.”  What do you think here about what Bill Gross is saying? Do you think in fact deflation is a real possibility for the United States?
MARC FABER: Well, I think the concept of inflation and deflation is frequently misunderstood because in some sectors of the economy you can have inflation and in some sectors deflation. But if the investment implication of Bill Gross is that – and he’s a friend of mine. I have high regard for him. If the implication is that one should be long US treasuries, to some extent I agree. The return on 10-year notes will be miserable, 2.35 percent for the next 10 years if you hold them to maturity in each of the next 10 years. However, if you compare that to French government bonds yielding today 1.21 percent, I think that’s quite a good deal, or Japanese bonds, a country that is engaged in a Ponzi scheme, bankrupt, they have government bond yields yielding 0.43 percent. So –
*  *  *
Faber: Japan Is Engaged in a Ponzi Scheme
continue reading »