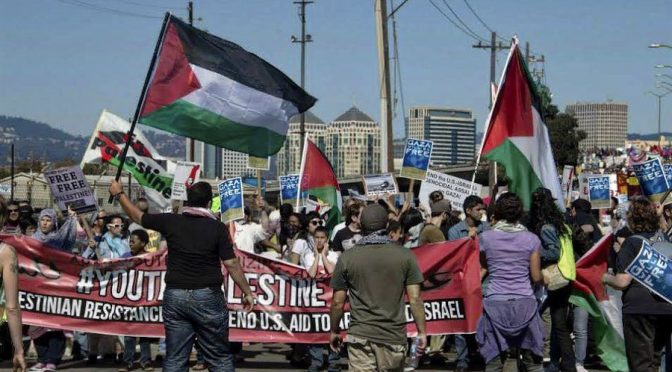 Kuwait to boycott 50 companies over role in illegal Israeli settlements

The government of Kuwait has announced that it will not deal with 50 companies due to their role in illegal Israeli settlements in the occupied Palestinian territory in a move being welcomed by campaigners as a landmark success for the Boycott, Divestment and Sanctions (BDS) movement.
The blacklisted companies include some of the top corporate targets of the BDS movement, such as Volvo, Heidelberg Cement, Dexia, Pizzarotti, Alstom as well as Veolia. Veolia was recently excluded from a $750m contract, and “all future contracts,” by Kuwaiti authorities over its role in the illegal Jerusalem Light Rail project and other projects that serve illegal Israeli settlements.
The blacklisted companies are expected to be excluded from contracts worth billions of dollars, especially if other Arab countries take similar steps.
According to media reports, the Kuwaiti Ministry of Commerce and Industry is also investigating the Kuwaiti operations of G4S, the British security company that secures Israeli military checkpoints and colonies and helps Israel run prisons at which Palestinian political prisoners are tortured, with a view to cancelling its license to operate if it does not terminate its participation in Israeli violations of international law.
Zaid Shuaibi, a spokesperson for the Palestinian BDS National Committee, the largest coalition of Palestinian trade unions, parties, NGOs and popular committees that leads the global BDS movement, said:
“This landmark decision means that international companies will now pay an even heavier price for participating in Israeli violations of international law.
“As European banks and pension funds continue to divest from Israel’s occupation and companies such as Veolia and G4S lose billions of dollars as a result of sustained, effective grassroots campaigning, many firms will now be wondering whether supporting Israel’s regime of occupation, colonialism and apartheid is good for business,” said Shuaibi.
Many European governments have taken steps to discourage firms from having economic links to the Israeli occupation of Gaza and the West Bank, including East Jerusalem, but this is the first time a government has decided to boycott international companies over their role in illegal Israeli settlements.
The Kuwaiti move, which follows lobbying by the Palestinian BDS National Committee and its partners in Kuwait, implements a decision of the Organization of Islamic Cooperation (OIC), taken at a summit of foreign ministers at the height of the Israeli massacre in Gaza in August, to “impose political and economic sanctions on Israel, and boycott the corporations that operate in the colonial settlements built on occupied Palestinian territory.”
– See more at: http://bdsmovement.net/2014/kuwait-to-boycott-50-companies-12770#sthash.TnzETi7J.dpuf

– SodaStream to benefit from Israel’s displacement of Palestinians in Naqab
– Retailers and investors dropped SodaStream over BDS pressure
Palestinian boycott, divestment and sanctions (BDS) activists have welcomed the news that SodaStream has announced it is to close its factory in the illegal Israeli settlement of Mishor Adumim following a high profile boycott campaign against the company.
“SodaStream’s announcement today shows that the boycott, divestment and sanctions (BDS) movement is increasingly capable of holding corporate criminals to account for their participation in Israeli apartheid and colonialism,” said Rafeef Ziadah, a spokesperson for the Palestinian Boycott, Divestment and Sanctions National Committee (BNC), the broad coalition of Palestinian civil society organisations that leads and supports the BDS movement.
“BDS campaign pressure has forced retailers across Europe and North America to drop SodaStream, and the company’s share price has tumbled in recent months as our movement has caused increasing reputational damage to the SodaStream brand,” she added.
The news of this major success against a company famed for its role in illegal Israeli settlements broke amidst intensifying demonstrations against Israel’s policies of colonisation in Jerusalem.
Grassroots boycott activism saw SodaStream dropped by major retailers across North America and Europe including Macy’s in the US and John Lewis in the UK.
SodaStream was forced to close its flagship store in Brighton in the UK as a result of regular pickets of the store.
Soros Fund Management, the family office of the billionaire investor George Soros, sold its stake in SodaStream following BDS pressure.
SodaStream’s share price fell dramatically in recent months as sales dried up, particularly in North America.
After reaching a high of $64 per share in October 2013, the stock fell to around $20 per share this month. SodaStream has estimated its third quarter revenue will be $125 million, down almost 14 percent from the same period last year.
But Ziadah warned that SodaStream will still remain actively complicit in the displacement of Palestinians in the Naqab and will remain a focus of boycott campaigning.
– See more at: http://bdsmovement.net/2014/sodastream-closes-illegal-settlement-factory-in-response-growing-boycott-campaign-12782#sthash.MF1Fxh7t.dpuf

[email protected] – www.jordanbds.net
AMMAN (27-10-2014) – At a time when the National Electric Power Company (NEPCO) and the Jordanian government pursue an agreement to purchase gas from Israel via American and Israeli companies, Jordanian civil society institutions are unequivocally demanding a boycott by Jordan.
The Jordan BDS Movement –known in Arabic as Alurdun Tuqate’ – published today its statement which more than 60 civil society institutions have signed onto, including labor and trade unions, women’s associations, cultural and charitable societies, sports clubs, human rights organizations and business associations, affirming that they reject any dealings with Israel and call upon all Jordanian institutions from civil society and the public and private sectors to join them in boycott and anti-normalization.
This announcement coincides with the 20th anniversary of the Wadi Araba Treaty thus affirming once again that the Jordanian civil society –representing a broad segment of Jordanians- absolutely refuses to normalize relations with Israel when it continues to perpetrate crimes against Arab peoples. The latest such crimes were the assault on Gaza and the desecration of Al-Aqsa Mosque in Jerusalem.
The stance of those who signed onto the “Jordan Boycotts” statement was not only limited to boycotting Israel and its institutions, but also called upon other Jordanian establishments to adopt boycott and anti-normalization. By the same token, the signatories affirmed they are conveying the message to their Arab and international networks and urging said networks to isolate Israel until it terminates its occupation of Arab lands, allows the return of the Palestinian refugees to their homes and until the Palestinian people attain their rights completely. Further, the signatories expressed their position clearly against multinational corporations colluding with Israel, stating that these corporations must choose between either the Arab market, or working with the Zionist entity. This statement is supportive of the call by Palestinian civil society institutions for boycott, dated July 9, 2005 and supports the steadfastness of the Palestinian people.
– See more at: http://bdsmovement.net/2014/jordan-civil-society-demands-boycott-of-israel-12801#sthash.iu2W48xE.dpuf

More than 500 anthropologists back academic boycott of Israel

Palestinian children play near houses destroyed during Israel’s summer offensive, in the Shujaiya neighborhood east of Gaza City, 5 October, on the second day of the Muslim Eid al-Adha.

More than 500 anthropologists from around the world have signed a new call for a boycott of Israeli academic institutions.
According to a statement issued on 1 October, the scholars call upon Israel to:

End its siege of Gaza, its occupation and colonization of all Arab lands occupied in June 1967, and dismantle the settlements and the walls;
Recognize the fundamental rights of the Arab-Palestinian citizens of Israel and the stateless Negev Bedouins to full equality; and
Respect, protect, and promote the rights of Palestinian refugees to return to their homes and properties as stipulated in UN Resolution 194.

The initial list of signatories featured more than 250 names, including academics from Australia, Canada, China, Holland, India, Lebanon, Palestine, Sweden, Turkey, the UK and the United States. Colleagues from Spain, Ireland, Belgium, Chile, Egypt, Finland, France, Germany, Greece, Kuwait, Portugal, Qatar, Mexico, the Philippines and South Africa, among others, have added their support.
“The recent military assault on the Gaza Strip by Israel is only the latest reminder that the world’s governments and mainstream media do not hold Israel accountable for its violations of international law,” the statement notes, offering a rationale for civil society action.
Amongst the signatories are major names in the anthropology field, including Professors Jean and John Comaroff of Harvard University, Professors Lila Abu-Lughod and Michael Taussig of Columbia University, Talal Asad of CUNY and Sherry Ortner and Susan Slymovics of UCLA.
The list also includes a number of specialists on Palestine itself, including Nadia Abu El Haj of Barnard College, Glenn Bowman of the University of Kent, Julie Peteet of the University of Louisville and Rosemary Sayigh, probably one of the best-known writers and scholars on Palestine since the 1970s. 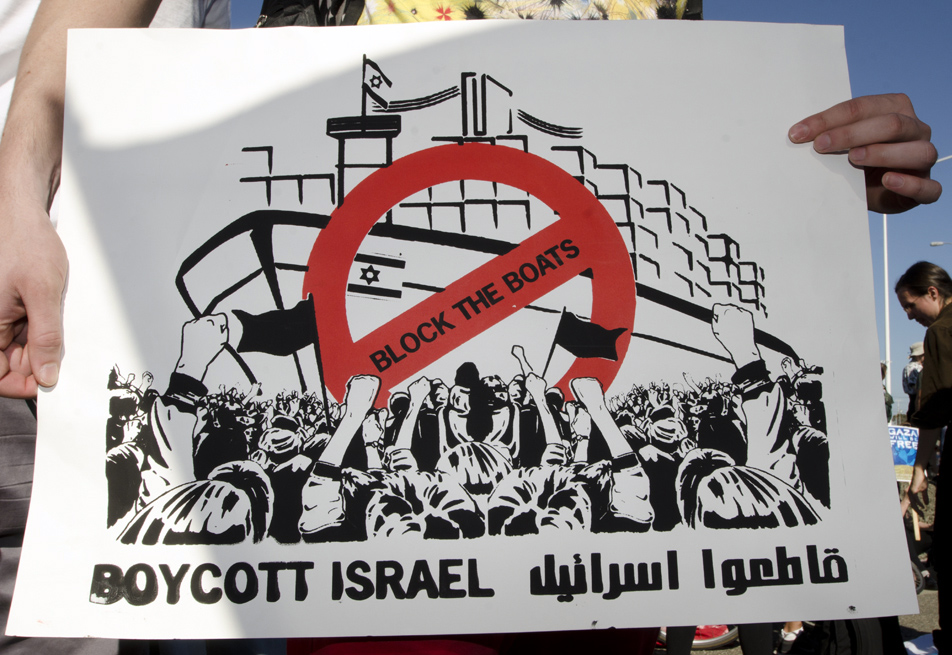