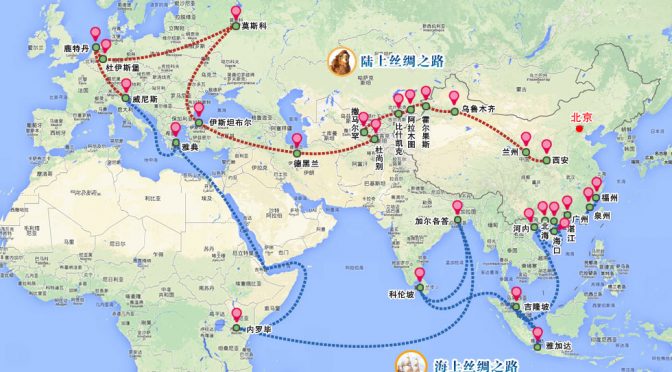 
Chinese President Xi Jinping on Saturday announced China will contribute $40 billion to set up a Silk Road Fund to strengthen connectivity in the Asia-Pacific region.

Xi said the goal of the Fund is to “break the bottleneck in Asian connectivity by building a financing platform.”
The new Silk Road Fund will be used to provide investment and finance for infrastructure, industrial projects along the “Belt and Road”, Xi said, referring to China’s Silk Road Economic Belt and the 21st Century Maritime Silk Road initiatives.
He added that the fund will be “open” to investors from both within and outside Asia.
The Asian Development Bank has estimated that in the next decade Asian countries will need $8 trillion in infrastructure investments to maintain the current economic growth rate.
“The Silk Road boasts a 3-billion population and a market that is unparalleled both in scale and potential,” Xi said in September last year.
The Silk Road connected China and Europe from around 100 B.C.
The 4,000-mile road linked ancient Chinese, Indian, Babylonian, Arabic, Greek and Roman civilizations.
A new map unveiled by Xinhua shows the Chinese plans for the Silk Road run through Central China to the northern Xinjiang from where it travels through Central Asia entering Kazakhstan and onto Iraq, Iran, Syria and then Istanbul in Turkey from where it runs across Europe cutting across Germany, Netherlands and Italy.
The maritime Silk Road begins in China’s Fujian and ends at Venice, Italy.
In a landmark achievement, 21 Asian nations including China and India last month signed on a new infrastructure investment bank which would rival the World Bank.
One of the first projects of the new Bank is expected to be financing infrastructure projects along the “Silk Road Economic Belt” and the “Maritime Silk Road” re-establishment.
Meanwhile on Saturday in Beijing, the Chinese President stressed that efforts should be made to realize Asia’s connectivity by making Asian countries a priority.
“Asian countries are just like a cluster of bright lanterns. Only when we link them together, can we light up the night sky in our continent,” he said.
China will provide neighboring countries 20,000 training opportunities for connectivity professionals in the coming five years.
Experts say these new announcements will boost China’s global influence and enhance its soft power.
Apart from the AIIB, the BRICS new $100 billion Development Bank is also being headquartered in China.
“China has considerable experience in infrastructure planning and construction, and financing projects outside the country. As Finance Minister Lou Jiwei has said, China Development Bank’s commercial infrastructure loan is now far bigger than that of the World Bank and ADB combined. And surprisingly, this process started only 20 years ago,” write Asit Biswas and Cecilia Tortajada, China scholars at the Lee Kuan Yew School of Public Policy, Singapore.
TBP and Agencies