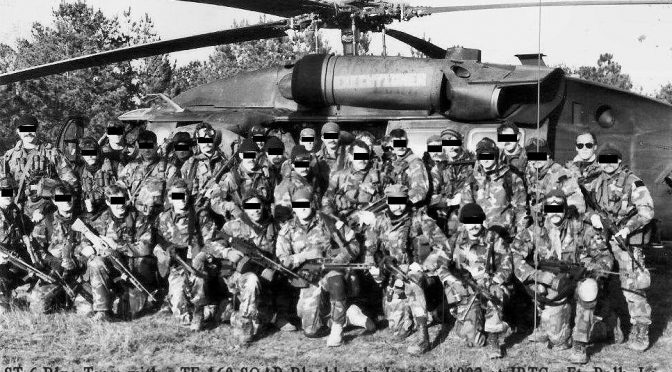 Navy SEALs are scrambling on who gets the credit so they could profit from it. Maybe, that’s what they were promised as compensation for staging a fake covert op in Pakistan. Other members of the dreaded SEAL Team Six went with the Chinook helicopter when it crashed mysteriously in Afghanistan.

By Dr. Paul Craig Roberts
Global Research, November 07, 2014
PaulCraigRoberts.org
RT, one of my favorite news sources, has fallen for a fake story put out by the Pentagon to support the fantasy story that a SEAL team killed Osama bin Laden, who died a second time in Abbottabad, Pakistan, a decade after his first death from illness and disease.  http://rt.com/usa/202895-navy-seal-shot-binladen/
This fake story together with the fake movie and the fake book by an alleged SEAL team member is the way the fake story of bin Laden’s murder is perpetrated. Bin Laden’s alleged demise at the hands of a SEAL team was a propaganda orchestration, the purpose of which was to give Obama a hero’s laurels and deep six Democratic talk of challenging his nomination for a second term.
Osama bin Laden died in December 2001 of renal failure and other health problems, having denied in his last recorded video any responsibility for 9/11, instead directing Americans to look inside their own government. The FBI itself has stated that there is no evidence that Osama bin Laden is responsible for 9/11. Bin Laden’s obituary appeared in numerous foreign and Arabic press, and also on Fox News.  No one can survive renal failure for a decade, and no dialysis machine was found in the alleged Abbottabad compound of bin Laden, who allegedly was murdered by SEALs a decade after his obituary notices.
Additionally, no one among the crew of the ship from which the White House reported bin Laden was buried at sea saw any such burial, and the sailors sent messages home to that effect.  Somehow a burial was held onboard a ship on which there are constant watches and crew on alert at all hours, and no one witnessed it.
Additionally, the White House story of the alleged murder of bin Laden changed twice within the first 24 hours.  The claim that Obama and his government watched the action transmitted live from cameras on the SEALs’ helmets was quickly abandoned, despite the release of a photo of the Obama regime intently focused on a TV set and alleged to be watching the live action. No video of the deed was ever released.  To date there is no evidence whatsoever in behalf of the Obama regime’s claim. Not one tiny scrap.  Just unsubstantiated self-serving claims.
Additionally, as I have made available on my website, witnesses interviewed by Pakistan TV reported that only one helicopter landed in Abbottabad and that when the occupants of the helicopter returned from the alleged bin Laden compound, the helicopter exploded on takeoff and there were no survivors.  In other words, there was no bin Laden corpse to deliver to the ship that did not witness a burial and no SEAL hero to return who allegedly murdered an unarmed bin Laden. Moreover, the BBC interviewed residents in Abbottabad, including those next door to the alleged “bin Laden compound,” and all say that they knew the person who lived there and it was not bin Laden.
Any SEAL who was so totally stupid as to kill the unarmed “Terror Mastermind” would probably have been courtmartialed for incompetency. Look at the smiling face of the man Who Killed Bin Laden.  He thinks that his claim that he murdered a man makes him a hero, a powerful comment on the moral degeneracy of Americans.
So what is this claim by Rob O’Neill about? He is presented as  a “motivational speaker” in search of clients.  What better ploy among gullible Americans than to claim “I am the one who shot bin Laden.”  Reminds me of the western movie: The Man Who Shot Liberty Valance.  What better way to give Rob O’Neill’s claim validity than for the Pentagon to denounce his revelation for breaking obligation to remain silent. The Pentagon claims that O’Neill by claiming credit has painted a big target sign on our door asking ISIS to come get us.
What unbelievable nonsense.  ISIS and anyone who believed Obama’s claim to have done in bin Laden already knew, if they believed the lie, that the Obama regime claimed responsibility for murdering an unarmed bin Laden.  The reason the SEAL team was prevented from talking is that no member of the team was on the alleged mission.
Just as the ship from which bin Laden was allegedly buried has no witnesses to the deed, the SEAL unit, whose members formed the team that allegedly dispatched an unarmed Terrorist Mastermind rather than to take him into custody for questioning, mysteriously died in a helicopter crash when they were loaded in violation of procedures in an unprotected 1960s vintage helicopter and sent into a combat zone in Afghanistan shortly after the alleged raid on “bin Laden’s compound.”
For awhile there were news reports that the families of these dead SEALS do not believe one word of the government’s account.  Moreover, the families reported receiving messages from the SEALs that suddenly they felt threatened and did not know why.  The SEALs had been asking one another: “Were you on the bin Laden mission?”  Apparently, none were. And to keep this a secret, the SEALs were sent to their deaths.
Anyone who believes anything the US government says is gullible beyond the meaning of the word.
source »

Two former US Navy SEALs that took part in the raid at Osama bin Laden’s compound three years ago have told opposing versions of who ultimately killed the Al-Qaeda founder. The dispute over events is now materializing as both seek the spotlight.
As RT previously reported, former SEAL Team Six member Rob O’Neill – who was referred to only as “the shooter” in an Esquire magazine interview detailing the 2011 mission – went public this week as the person responsible for shooting Bin Laden three times in the forehead. Now Rob is set to appear in a Fox News series scheduled to air later this month where he will again be presented as the primary shooter.
In O’Neill’s version of events, as told to Esquire in 2013, the “point man” in the Abbottabad, Pakistan raid tackled two women as “the shooter” advanced, killing Bin Laden in another room.
Yet his claims are disputed by another SEAL who came forward in 2012 with his own account of the raid. In ‘No Easy Day’, Mark Bissonnette, writing under the pseudonym ‘Mark Owen’, said the first person to enter bin Laden’s room, the “point man,” was the SEAL to kill Bin Laden.
“Two different people telling two different stories for two different reasons,” Bissonnette told NBS News on Thursday.
“Whatever he says, he says. I don’t want to touch that.”
Bissonnette is scheduled to release next week a second book, titled ‘No Hero’, about his time as a SEAL.
The scramble for fortune or acclaim over the killing of Bin Laden was denounced by US military officials, namely a top commander of the Navy SEALs, a group tasked with clandestine operations, in an Oct. 31 letter to his troops.
“A critical tenet of our Ethos is ‘I do not advertise the nature of my work, nor seek recognition for my actions,’” wrote Rear Admiral Brian Losey, head of Naval Special Warfare Command, along with top enlisted sailor Force Master Chief Michael Magaraci.
“We do not abide willful or selfish disregard for our core values in return for public notoriety and financial gain, which only diminishes otherwise honorable service, courage and sacrifice.”
“All members exposed to classified information have a duty obligation to protect this information, regardless of what may be reflected in the media, accurately or otherwise,” they added.
“We will actively seek judicial consequence for members who willfully violate the law, and place our teammates, our families, and potential future operations at risk.” Bissonnette’s first book has already drawn ire from the Pentagon. He refused to offer the federal government a draft of ‘No Easy Day’ for legal review, and he is now under investigation for potentially disclosing classified information from the raid. He has said he was frustrated by who could and could not speak of the mission in the ensuing months.
“Everybody and their brother was talking about this,” Bissonnette said, according to NBC News. “How can you be holding it against me?”
After an illustrious military career that included dozens of decorations, O’Neill, 38, has since left the Navy and works as a motivational speaker based on his 16 years in the service. He reportedly decided to come forward in public after frustration over the loss of veterans’ benefits, as he did not serve a full 20-year term as is the standard for certain allowances from the service.
The 2011 raid was ordered by Obama after the CIA tracked Bin Laden’s courier to the Abbottabad compound. Emerging from Blackhawk helicopters, the SEAL Team Six pounced on the hideout. Bin Laden’s body was said to have been dumped at sea, though it was revealed over a year later that no Navy sailor witnessed the burial and there were no photographs or video evidence of the event.
source »

One thought on “Osama: The Only Man Who Officialy Died Twice”