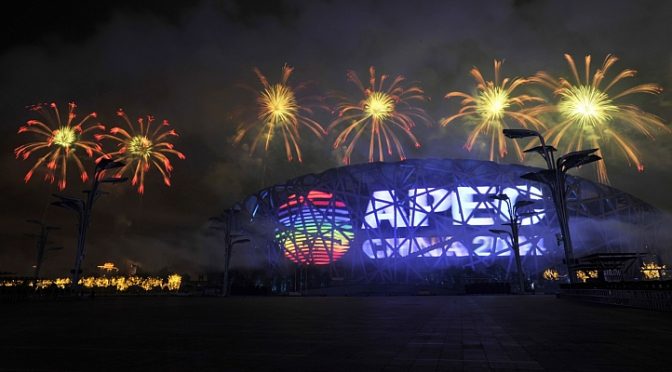 
BEIJING, Nov. 10 (Xinhua) — In a dining hall that was once a swimming pool for Olympic champions and now resembles a traditional Chinese garden, leaders and celebrities from the Asia-Pacific were welcomed as “friends and neighbors” of China.

On Monday evening, Chinese President Xi Jinping hosted a grand banquet for guests to attend the 22nd Asia-Pacific Economic Cooperation (APEC) Economic Leaders’ Meeting.
Before the banquet, Xi and his wife Peng Liyuan welcomed the guests at the entry.
Leaders and their families, including U.S. President Barack Obama and Russian President Vladimir Putin, came to shake hands with the Xi couple.
The Xi couple and guests were all wearing outfits made of silk and specially designed to represent China’s rich history and old tradition. Xi was in dark purple while others chose different colors from turquoise, indigo blue,crimson to brown.
“Your suits and dresses are in Chinese style. This draw us closer. It will also appear to ordinary Chinese who see you (from TV and photos) that you come here just like calling on a neighbor or old friend,” Xi told his guests at the banquet.
The banquet was held in the National Aquatics Center, dubbed “Water Cube”, right opposite to the National Stadium. Both are the Beijing Olympic landmarks.
“We chose here to welcome you because water is an important symbol in our culture and the APEC is linked by the Pacific Ocean,” Xi said. “Everyone here is responsible to make the Pacific the true ocean of peace, friendship and collaboration.”
The President hailed this evening “a meaningful one” because all the guests came for a common mission, which is to draw up a blueprint for the Asia-Pacific’s long-term development and decide the direction the region will head.
“Tomorrow we will meet at the foot of Yanshan Mountains and by the side of Yanqi Lake,” Xi said.
He called on participants to be free to share their ideas and pool wisdom at tomorrow’s meeting.
After the banquet, the guests enjoyed a feast of folk dance and traditional songs as well as a splendid firework show, accompanied by the performance of 640 drummers in the square outside the Water Cube.
“We would like to deliver a passion and strength that are uniquely Chinese,” said Zhang Yimou, chief director of the performance who also directed the opening ceremony of the Beijing Olympics.