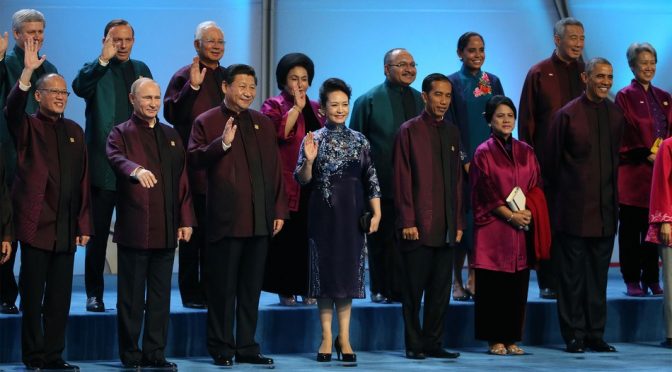 On top of all signed multi-billion dollar trade agreements, leaders from APEC member countries were caught in their more human side and as expected, both sides of the media were feasting on them. 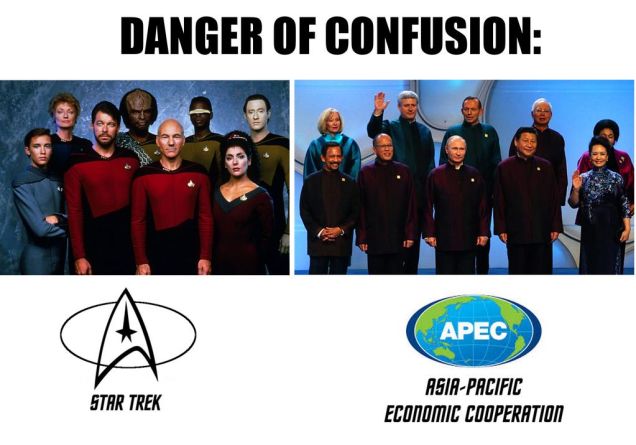 Who knows, this could be a foreshadowing of our future based on the essence of the Star Trek movie.


This year’s APEC summit in Beijing totally rocked – in the sense that it not only landed some historic deals, but also amused onlookers, censors, and critics. Between #shawlgate and President Obama chewing gum, there was a lot to talk about.

While many Russians thought that Vladimir Putin came out looking like a gentleman after offering a shawl to China’s First Lady Peng Liyuan on a chilly autumn evening, the incident did not go over well in China.
It seemed to paint a not very attentive Chinese President Xi Jinping in a bad light, and was subsequently censored from news bulletins in the country.
[youtube=http://www.youtube.com/watch?feature=player_embedded&v=wRqVWa4ZUS4]

Star Trekking across the APEC summit

At a certain moment, you could be forgiven for thinking the latest Star Trek convention had descended on Beijing – but maybe the fact there was not a Klingon in sight gave the game away.
http://coub.com/view/3z8j5
APEC summits are known for world leaders wearing local attire, such as ponchos in Peru in 2008. This time around, the leaders were made to go forth and prosper in jackets based on the “Mao tunics,” once a favorite with China’s leaders.

In the latest side-development, the US president was caught chewing gum, which did not go down very well with the locals. In China, this is considered a social no-no. Local Internet users, used to far greater levels of formality from their leaders, branded him an idler and…a rapper.

This is not the first time Obama’s jaws have caused controversy. At a D-Day World War 2 ceremony over the summer in Normandy, the French shouted ‘sacre bleu’ as the US president chewed on a stick on gum.

Obama is chewing gum again in China…. offending them… and showing how little he knows about diplomacy.

All the sheep in New Zealand would not have been able to have produced enough wool to match the digital carpet used for the world leaders as they attended the summit dinner in the Chinese capital, Beijing.
[youtube=http://www.youtube.com/watch?feature=player_embedded&v=CT0RKlCqQcQ]

Out with a bang!

Given that they invented fireworks back in the seventh century, the Chinese certainly know how to put on a good show. Six years ago at the ‘Bird’s Nest’ stadium, Beijing put on one of the greatest ever fireworks shows for the 2008 Olympic Games. China showed it could still pull out all the stops at the APEC summit, and produced a stunning display again – but this time with ‘eco-friendly’ fireworks, leaving those with a ring-side seat speechless.
[youtube=http://www.youtube.com/watch?feature=player_embedded&v=52kl1RtpAvA]
source »

An apparently innocuous gesture from Vladimir Putin, who put a shawl around the shoulders of China’s First Lady Peng Liyuan during a fireworks display, has attracted accusations of being Russia’s “Don-Juan-in-Chief” from Western media.
The Russian president followed his country’s cold-weather etiquette, when he offered what appeared to be a shawl or blanket to Chinese Premier Xi Jinping’s wife during a chilly outdoor fireworks display at the APEC summit in Beijing. The camera caught the former renowned folk singer courteously accepting the offer, before exchanging the shawl for a coat handed to her by an assistant. Meanwhile, Xi sat a few meters away, talking animatedly to Barack Obama.
Monday’s momentary humanizing episode might have passed without mention, but the image proved a boon for journalists possibly bored with the intricacies of Asia-Pacific Economic Cooperation.
“’Putin’ On the Moves: Vlad Cozies Up to China’s First Lady,” screamed NBC.
“Putin Hits on China’s First Lady,” asserted US magazine Foreign Policy. “Russia’s Don Juan-in-chief just got a little too friendly with Xi Jinping’s wife.”
“The first unspoken rule of diplomacy might be “Don’t hit on the president’s wife,” but Russia’s newly single president Vladimir Putin seems to have missed the memo,” it continued.
[youtube=http://www.youtube.com/watch?feature=player_embedded&v=wRqVWa4ZUS4]

Vladimir Putin divorced Lyudmila, his wife of 30 years, last year. The couple were said to have been separated for some time.
Several outlets went with the obvious ‘Coatgate’ concept.
Chinese audiences, to whom Xi and Peng are always depicted as a dream power couple, have not had a chance to savor the gossip.
Locals were able to see the moment live on national broadcaster CCTV, with the commentator noting the incident, which also sparked a hash tag on Chinese social networks.
Yet a few hours later, all mention of the incident were erased, and the videos taken down, presumably by one of China’s thousands-strong team of censors.
“China is traditionally conservative on public interaction between unrelated men and women, and the public show of consideration by Putin may provide fodder for jokes, which the big boss probably does not like,” commentator Zhang Lifan told the Guardian.

This is not the first time Vladimir Putin’s manners have landed him in a mini-storm. A similar gesture last year, when Putin offered a shawl to German Chancellor Angela Merkel during the G-20 summit in St. Petersburg, provoked many of the same kind of comments.
source »