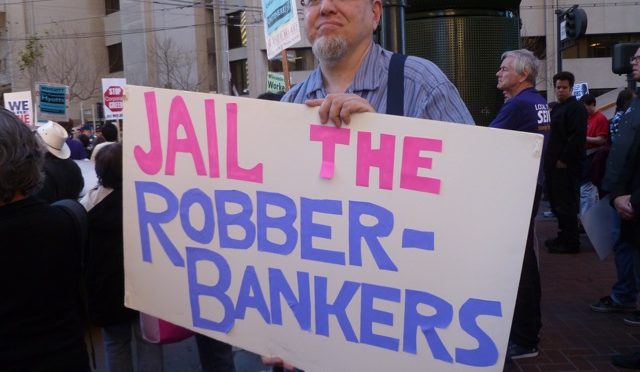 Who would expect that a US military controlled territory would jail bankers including an ex-president’s brother?
Previously, Iran executed by hanging a billionaire and three others who were responsible for @2.6Billion bank scam [here], and 2 received life sentences and 25 others received 25 years in prison.
In comparison, the United States has jailed just one banker for PR’s sake.

By Hamid Shalizi and Jessica Donati

(Reuters) – An Afghan judge tripled the jail sentences of two former heads of Kabul Bank to 15 years on Tuesday at the end of a re-opened court case into the bank’s collapse in 2010, which followed allegations of fraud and triggered a financial crisis.
Afghanistan’s new President Ashraf Ghani announced on Oct. 1 that he would re-open the inquiry into the theft of almost $1 billion from the bank, fulfilling a campaign promise to make fighting corruption a priority.
The case also involved Mahmoud Karzai, the brother of Ghani’s predecessor president Hamid Karzai. Mahmoud Karzai, a shareholder in the bank, has so far been spared jail but the judge on Tuesday ordered that his assets be frozen, along with those of others, until all the funds stolen from the bank have been returned. They face prosecution if the funds are not repaid.
The Afghan government was forced to bail out the country’s then biggest bank after a run on deposits in 2010. It was later re-launched as the state-run New Kabul Bank, but confidence in the banking sector has yet to fully recover.
Only about a third of the $935 million stolen has been recovered, according to the receivers.
continue reading »

Nation #1 is, of course, the US (or any other western nation). Nation #2 is Afghanistan.
Which one is the banana republic again?
AP reports that the scandal in 2010 shook confidence in Afghanistan’s tiny banking sector, and the loss accounted for around 5 percent of the country’s economy, making it the biggest banking collapse in history. By comparison, just the derivative book of JPMorgan alone is 4 times the size of US GDP.
Like in the US, the government had no choice but to bail out the bank and brought in receivers who, officials say, have traced most of the missing funds.

The scandal struck at the heart of the Kabul political establishment, involving relatives of the former president Hamid Karzai and one of his deputies, Marshall Mohammad Qasim Fahim.
President Ashraf Ghani has put the case at the center of his anti-corruption campaign, and within days of taking office in September ordered it resolved within 45 days.

So banker justice does exist? And this is how non-banana republics deal with a runaway criminal financial sector, which dangles the threat of systemic collapse any time the regulators, at least those who don’t hope to get a job on Wall Street next, come sniffing:

The Kabul Bank’s former chairman Sherkhan Farnood and former chief executive officer Khalillulah Ferozi were sentenced live on television, after a two-day appeal against earlier sentences of five years in prison. They have already served more than four years of the original sentence.
A panel of five judges at the Kabul Appeals Court also fined Farnood more than $237 million.
The court also ordered the assets of Mahmood Karzai and Hasin Fahim, brothers respectively of the former president and deputy president, along with 17 other defendants, frozen until their debts are repaid.
“If there is any delay in returning all the outstanding debt, they will be dealt with by the courts,” the judgment said.
The bank was one of the country’s flagship institutions and until its collapse had been responsible for paying salaries of government employees, army and police across the country.
It was split into two, with the offshoot, the New Kabul Bank now responsible for the salary payments, and holding around $400 million in customer deposits, officials said.

Curious for more? Read “The Great Afghan Bank Heist.”
And while Afghanistan’s banking sector is now well on the road to recovery and doesn’t need endless central bank bailouts (unlike the US, Europe or Japan) the nation does remain a banana republic but for other reasons: namely, US forces refuse to leave. Why? One look at the chart below should explain it.

Why Afghanistan remains an incubator – under constant US supervision – for the heroin trade, read “7.6 Billion Reasons Why The US ‘War On Drugs’ In Afghanistan Failed”
source »