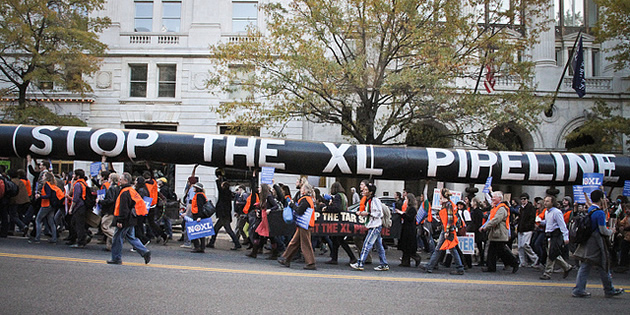 Twitterstorm will be held Monday night, November 17, 2014, 8 p.m.-10 p.m. – EST.
LAWTON, OKLAHOMA – On Tuesday, November 18th, the Senate will be voting on a bill that will bypass the normal process and fast track approval of the TransCanada Keystone XL Pipeline. Since its proposal, the TransCanada XL Pipeline has been met with fierce opposition from Indigenous nations along the proposed pipeline route and with good reason. The KXL pipeline is a threat to our natural resources, to the well-being of our people, to our sacred sites, and to the future of this planet. With the renewed fervor to mandate approval of the KXL pipeline by the politicians who stand to profit from their investments and partnerships with the gas/oil industry, it is of the utmost importance that we continue to make our presence known and our voices heard.

In the last two years, hundreds of thousands of people, both Native and non-Native, have forged alliances and staged massive protests and blockades across the United States and Canada to voice their dissent.

The message that we are sending to TransCanada and to the politicians in favor of the pipeline cannot be any clearer. We will not allow the KXL Pipeline to jeopardize our land, our water and our future generations. At this point, the approval of the KXL pipeline cannot be perceived in any other manner than as a willful act of aggression towards our sovereign nations and it is unacceptable.
In an effort to help persuade the Senate to make the right call and vote against the KXL pipeline, Not Your Mascots will be hosting a twitterstorm using the hashtags #NoKXL, #HonortheTreaties, and #VoteNOKXL.
The twitterstorm will be held Monday night, November 17, 2014, 8 p.m.-10 p.m. – EST. To lend your support and to learn more about the event, visit: https://www.facebook.com/events/368376766669011
In addition to #HonortheTreaties Twitterstorm, Not Your Mascots will be supporting the No Keystone XL protest being held in Washington D.C. on Nov 17th, 2014. This protest will consist of local students, Nebraskans who live along the pipeline route, and representatives from environmental advocacy organizations like 350 Action. Attendees will highlight the pipeline’s role in accelerating dirty tar sands oil development, and worsening the threat of climate change by laying an inflatable pipeline across Sen. Landrieu’s front yard.
For more information visit: https://www.facebook.com/events/607831932662339/

One thought on “Tell the Senate to Honor the Treaties and vote NO to the KXL Pipeline!”