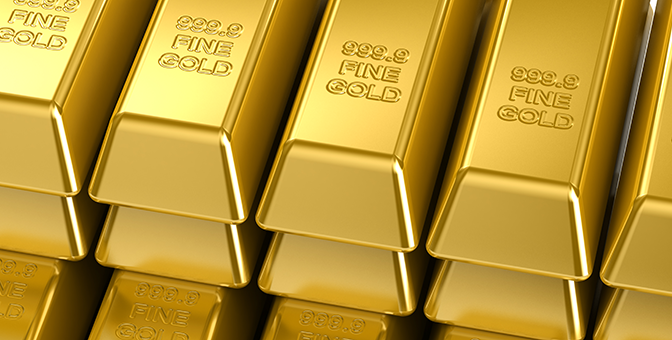 Conspiracy theorists, bullion traders and central banks are all watching closely to see if Swiss voters will give a boost to gold, as a commodity and as a currency support, on November 30, in defiance of the Swiss political and financial establishment.

The vote that could see the Swiss National Bank (SNB) forced to increase its gold reserves has become a major talking point internationally, with comparisons being made to the Scottish vote for independence.
The proposal is being spearheaded by some leading members of the rightwing Swiss People’s Party who are staunch critics of the SNB which, they claim, is part of the “biggest swindle of our times” – printing money as a means of robbing citizens by stealth.
Meanwhile, the price of gold is going through an exceptionally volatile phase, having climbed to an all-time high of $1,900 an ounce in September 2011. It is now trading near a four-year low at around $1,204 (CHF1,154).
According to Bloomberg, Bank of America has predicted that a ‘yes’ vote could push gold above $1,350 an ounce, an increase of 18%, because the SNB would need to buy about 1,500 tons within five years to comply with the change in the constitution.

In a Kitko News interview, former United States Republican congressman and presidential candidate, Ron Paul, who is a strong proponent of gold-backed currencies, said Switzerland was embarking on a “healthy conversation” regarding the role of its national bank.

“[The referendum] is one more step in the direction of proving that paper money, fiat money, money created by politicians out of thin air to subsidize big government and monetize debt is going to end.”
In a separate piece penned by Paul in DailyReckoning.com, the flagship site of contrarian investment analysis to which he is a regular contributor, he revealed the symbolic importance of the Swiss vote to its fans in the United States.
“Just like the US and the EU, Switzerland at the federal level is ruled by a group of elites who are more concerned with their own status, well-being, and international reputation than with the good of the country. The gold referendum, if it is successful, will be a slap in the face to those elites.”

Writing in Australia’s Business Spectator, financial commentator Miranda Maxwell also adopted an admiring tone, claiming that initiative “has at least as much to say about financial independence, democracy and economic security” as Scotland’s failed independence vote in September.
“If the Swiss manage to put a more solid foundation under their currency, the big question will be whether other nations follow suit,” she said.
The Financial Times has taken a more critical view of the “Save our Swiss Gold” initiative, sympathetic to the SNB’s position.
“For the central bank, the measures are not merely an anachronism: they pose an immediate threat.” The FT states that the new constitutional restrictions on gold would impair the bank’s ability to maintain the minimum exchange rate of CHF1.20 against the euro, set in September 2011.
The European Union is Switzerland’s biggest trading partner which makes the exchange rate ‘floor’ very important, according to Ursina Kubli of Sarasin Bank.
“It guarantees all exports to the eurozone have no currency risks at the moment. No movement means full certainty and that’s a big positive both ways,” she told swissinfo.ch.
Concern
Thomas Flury, UBS currency analyst, told swissinfo.ch that international investors were showing concern about the gold initiative.
“We see a lot of them asking: what is the impact on the Swiss franc? Will there be some kind of pressure on the Swiss National Bank? Do we need to fear something?”
Meanwhile Bloomberg View columnist Mark Gilbert strikes a note of caution in his assessment of the Swiss gold vote, pointing to metal’s volatility.
“While there’s something inherently attractive about a population having its say in how its assets are husbanded, the Swiss need to be mindful of the likely consequences of locking a fifth of their wealth away in bullion vault.”
In his first full interview on the issue on November 6 in the Neue Zürcher Zeitung, the head of the SNB, Thomas Jordan, said the combination of a set minimum gold reserve and a ban on selling the gold, as is called for by the gold initiative, would lead to problems for the central bank. Jordan said that it would be “fatal” for Switzerland to put restrictions on its own financial policy in this way, limiting its ability to react to changes in the markets and keep the country financially stable.

Aware that a return to a gold-backed currency or even the gold standard is a dream for some disillusioned Americans, one key Swiss campaigner for the gold initiative, Egon von Greyerz of Matterhorn Asset Management, has even been fundraising in English on his company website, which also happens to specialise in the buying and storage of physical gold and silver for private investors.
In an interview with the French-language finance newspaper L’Agefi last month, von Greyerz showed the depth of mistrust the initiative supporters have towards the SNB.
“There hasn’t been a physical audit of the gold that the SNB treats as if it was its own property. It claims that the gold has not been leased to other parties for transactions and that the yellow metal is still on deposit. But the best way to show this is to bring back the reserves to Switzerland. If that doesn’t happen you could think that it has been used for other purposes or even that is does not exist.”
‘Save our Swiss Gold’
Started by three Swiss People’s Party politicians – parliamentarians Luzi Stamm and Lukas Reimann, and former parliamentarian Ulrich Schlüer – the initiative to “save Switzerland’s gold” was handed in to the Federal Chancellery in 2013.
The proposal has three elements: Firstly the Swiss National Bank would not be permitted to sell any more of its gold reserves. The SNB dramatically reduced its holdings of gold in the 2000s. Secondly, the SNB would have to increase its holdings of gold equal to at least 20% of its assets within five years. Thirdly this gold would have to be kept entirely in Switzerland, which would require the repatriation of Swiss gold reserves stored in the Bank of England and Canada.
Currently the entire reserves of the SNB come to about CHF500 billion. To meet the terms of the initiative, the central bank would therefore have to hold gold in the amount of at least CHF100 billion. Given its current gold reserves, it would have to buy CHF65 billion worth of ingots.
By Clare O’Dea, swissinfo.ch

One thought on “Financial Eyes on Switzerland Ahead of Gold Vote”