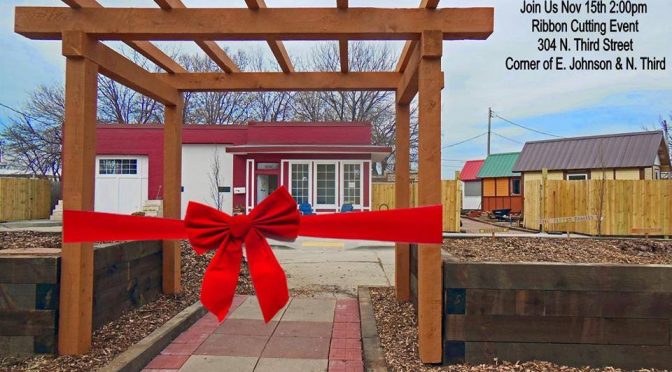 Madison Wisconsin: In a city with a homeless population that has risen by 7 percent over the last four years to about 3,370, Occupy Madison organizers decided to tell their local leaders to “put up or shut up” and developed a non profit organization Occupy Madison Inc. In June 2013 OM Build was born and Tiny Homes was decided on as a solution.

To achieve their goals of a Tiny Village complete with 9 tiny homes, permanent comprehensive day resource center, safer places to sleep at night, as well as access to restrooms, showers, laundry, community gardening space, and other basic needs for people experiencing homelessness, OM Build realized that they would need to work from within the system. The hard and relentless work paid off. Scheduled for November 15th 2014 is a Ribbon Cutting Event for The first Tiny Village for the Homeless in Madison.

Local organizers also state “Our approach to working within the system came only after we realized that without dotting every “i”, and crossing every “t”, the city and the county would never let us operate– they used every opportunity to enforce ordinances, regulations, and seemingly arbitrary whims against us. This paralleled precisely the persecution of everyday, unaffiliated, homeless individuals. When you are homeless, “the system” is rife with obstacles designed to prevent creative innovation or adaptation– we at Occupy Madison experienced the same headaches.” organizers also stated “In many ways, we have had much more success since we changed our approach. This was due not only to how we communicated with city and county offices (we never shirked from being open or transparent), but how we are perceived by Madison’s genteel liberal population. It’s stunning how a flowerbed on a windowsill can be so much better for PR than the window itself, or the house it’s attached to.”
At least six other cities nationwide are adopting Tiny Homes… others are installing Homeless Spikes. One OM Build organizer in Madison stated that Homeless pikes are “disgusting” and a “weak attempt to make even society’s most uninviting spaces– doorways, parks, etc– uninhabitable as well” He also states “People don’t choose to sleep in the gutter. Physically preventing people from getting whatever rest they can will not help them in any way, and nor do they help society. It’s tempting to say that for every spike a municipality erects, they should provide a warm, safe, clean, bed. But the truth is that we should be providing those beds anyway.”

Local organizers and volunteers state that “next is occupancy and fundraising. We’ve done a lot of work and spent a lot of money getting our site ready for people to move in. Now is a critical time for us financially– if we can’t raise enough funds to pay for making the site as wonderful as it is, there’s a real risk our whole project could go under.” Donations can be sent to paypay account http://bit.ly/1uSYGew Fundraiser in the past have been matched on a dollar per dollar basis and none of current progress would be possible without a 100% volunteer effort.
Local grass root groups that deserve a special shout out include: Friends of the State Street Family, The Bubbles program, (which provides free laundry services to the homeless), Occupy Madison, OM Build, Homeless Ministry at Bethel Lutheran Church, Madison Street Pulse (a cooperative homeless newspaper based In Madison WI).