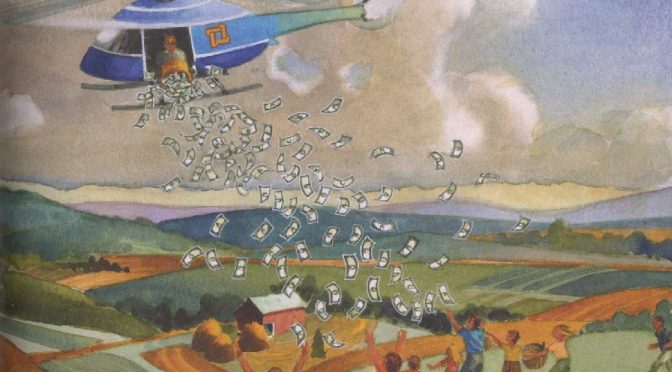 First, there was too much hype about prosperity funds, NESARA, St. Germain Trust, etc. Then it was the turn for Council on Foreign Relations [CFR] suggesting outright distribution of paper money to the masses.

Now, it is time for the German Deutsche Bank to leak some of what people in the fiat financial world are talking about.
The Cabal infested G20, for their part, want to have your bank deposits as part of their capital so that they won’t need to hijack the people’s social security funds.
So, let’s just keep our eyes on the ball…

Deutsche Bank: “People Are Talking About Helicopter Money And Debt Cancellation Being The End Game”

Submitted by Tyler Durden on 11/21/2014 10:11 -0500
If Deutsche Bank’s Jim Reid is right, what just took place overnight from the PBOC is just a pleasant start and an enjoyable dress rehearsal of what is about to take place. Where it ends is precisely where we have said it would ever since QE1 was announced in March 2009.

I had a few meetings yesterday and one of the biggest surprises I had was that for the first time in a long time people were talking about helicopter money and debt cancellation being the end game. This was a major theme of our 2013 long-term study but one that we’ve struggled to get much traction with over the last year. Perhaps there’s an increasing weariness that more QE globally whilst inevitable, is a blunt growth tool and that stopping it will be extremely difficult (let alone reversing it) without a positive growth shock. Maybe Japan’s move this week in delaying the further sales tax increase and the economy’s adverse reaction to the first increase reminds the market how difficult it might be to actually pay the bills with real money. As we said earlier this week it could be that the last few days marks the first steps towards monetization. Anyway, this is not something for today or tomorrow but the fact that different clients brought it up independently of each other makes me think that’s its starting to get into people’s thoughts.

Indeed it is, as we warned last September in “Bernanke’s Helicopter Is Warming Up” and yet everyone will be shocked, shocked, when the playbook that was clearly revealed by Ben Bernanke himself in 2002 is finally implemented:
… A broad-based tax cut, for example, accommodated by a program of open-market purchases to alleviate any tendency for interest rates to increase, would almost certainly be an effective stimulant to consumption and hence to prices. Even if households decided not to increase consumption but instead re-balanced their portfolios by using their extra cash to acquire real and financial assets, the resulting increase in asset values would lower the cost of capital and improve the balance sheet positions of potential borrowers. A money-financed tax cut is essentially equivalent to Milton Friedman’s famous “helicopter drop” of money
– Ben Bernanke, Deflation: Making Sure “It” Doesn’t Happen Here, November 21, 2002