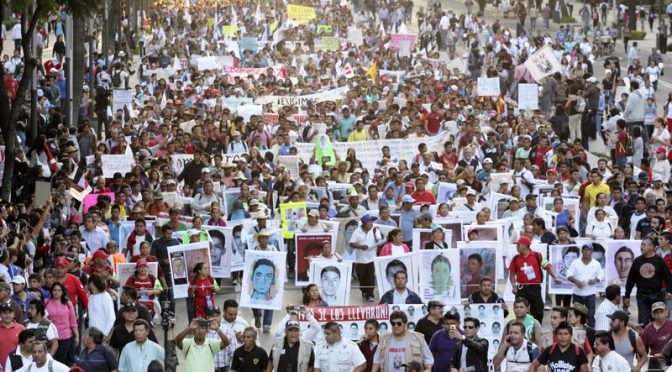 Translation posted 6 November 2014 11:30 GMT
Tens of thousands of people marched from the presidential palace to Mexico City’s main plaza to demand the safe return of 43 missing education students and protest the regional government’s role in their disappearance along with the president’s inefficient response to the crime.
Organizers said 120,000 people participated in the Global Day of Action for Ayotzinapa in the city, organized by various Mexican student groups, while police counted 60,000. Protesters’ cries for justice reached every corner of Mexico and the world; news site Revolucion 3.0 described the demonstration as possibly “the largest condemnation march in history” and shared an audiovisual gallery with minute-to-minute updates of the movement.
The protests occurred a day after José Luis Abarca, former mayor of Iguala and his wife María de los Ángeles Pineda, were arrested by federal forces in Mexico City in the early hours of Tuesday, November 4, 2014. Both have been identified by the government and the media as the alleged masterminds behind the initial attack against the students, which left six dead, and the subsequent disappearance of the 43 in Ayotzinapa.
Social media users shared messages in support of the march and images from the scene:

On Instagram and Twitter, users shared photos of the protests. The Miguel Agustín Pro Juárez Center for Human Rights published a snapshot taken in downtown Mexico City.
November 5 wasn’t the first time that the Ayotzinapa tragedy has sparked protests. Instagram user pariscervantes uploaded a collage of photos titled “A message for @EPN [Enrique Peña Nieto] from Beaux Arts” two weeks earlier.
Meanwhile, people throughout the country shared pictures of the latest protests from their locations:

Some remembered the thousand of lives lost in the war on drugs and crime in general, in addition to the 43 missing students:

While the parents of the 43 missing students declared during the protest:

At 7 p.m. Mexico time the hashtags  #AccionGlobalPorAyotzinapa (Global Action for Ayotzinapa), #SiRenunciaPeña (If Peña Steps Down) and #Abarca (the former mayor of Iguala and one of the main suspects) were among the top 10 trending topics on Twitter.
Follow our in-depth coverage: Bring Back Mexico’s Missing #Ayotzinapa Students

One thought on “Revolution is Brewing Up in Mexico”