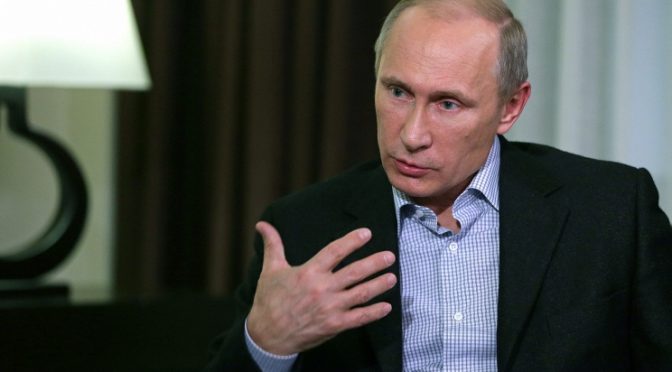 In the TASS special project Top Officials, Vladimir Putin talks about healthy lifestyle, the “fifth column” and oil prices “plot” and argues with Russian philosopher Nikolay Berdyayev
On health, wrong statement and the other side of the coin
– What’s your health status now, Vladimir Vladimirovich?
– All worries are in foes’ dreams!
– The foes are making hints…
– Really? It’s the first time I hear about it. What are they saying? Just fantasying?

– I won’t retell it to you. As a matter of fact, I’ve come to the firsthand source.
– Let them think this way. It’ll make them relaxed and will bring us benefits, too.
– But this isn’t idle curiosity, you know. The country’s health depends on your physical, moral and psychological condition. In a way…
– Do they call into question my bodily or psychic status?
– Their assumptions differ.
– I’m OK, all’s fine… And what sport are you doing?
– No sport for quite some time. Only sports on TV.
– That’s bad. No, TV surfing is no sport… And work requires certain energy, strength and physical activity.
– But why did you ask about it? Just because you…
– I do sports regularly.
– On a daily basis?
– Exactly. Absolutely on a daily basis. Frankly, though, I stopped doing it during trips. When the flight is long and the time difference is big you don’t sleep yourself out…
– By the way, do you adapt easily to local time zones or do you live by the Moscow time?
– I don’t adapt well. And when you’ve gotten adapted, it’s time to return home… Therefore, I try to live mainly by the Moscow time but long trips make it impossible, of course.
– Let’s go back to the issue I started with. Vyacheslav Volodin (first deputy chief of the presidential staff) said at the Valdai Forum, “No Putin, no Russia.” But you later said that the statement was absolutely wrong.
– Yes.
If a person thinks of essence and results of his work, as well as interests of people, then even a mistake does not look so terrible – But this was a formula having a particular connotation, nowadays at least. Many people inside and outside of the country associate Russia with you personally.
– I think that’s natural. The head of state, person number one in a nation is always associated with his country in one way or another. And not only in Russia. The individual is elected by direct secret balloting, people have delegated him certain powers, he is charged with conducting policy on people’s behalf. And, of course, the nation expects a definite conduct from its leader. The voters proceed from the assumption that they elected the head of state and trusted him and he will meet their expectations, defend their interests and struggle to improve their living in the economy, in the social sphere, in the international arena, and in the matters of security. There are many tasks. There is nothing unusual or anything specifically Russian in the fact associations of the kind spring up.
– Still very few leaders can boast the popularity ratings you have.
– That’s true but the problem is you’ll be unable to work if you think about ratings all the time. The worst thing of all is to get enslaved by contemplation of one’s ratings. As soon as someone starts doing it, he immediately turns into a loser. Instead of engaging in real business and moving forward with no fear of stumbling along the way, one who thinks about ratings abandons all activity. Then the rating begins a downhill slide. Vice versa, if a person thinks of the essence and results of his work, as well as the interests of the people, then even a mistake does not look so terrible. And he can speak of it straightforwardly and confess his blunder. And you know, this won’t affect the rating much, people will understand perfectly well the true intensions, sincerity and honesty, and especially, a direct dialogue. It is really valuable and people will always appreciate it.
Infographics – But still, when the level of support exceeds 80 percent after 15 years in power… This is both obvious and incredible.– I’ve already said that I feel myself a part of Russia. It’s more than just love. Each of us can speak of loving his Motherland. We all love it but I really feel being part of our people and I can’t imagine for a second living outside Russia.
Getting the support of compatriots for a long time, one cannot but make every effort to justify their trust. Quite possibly, that’s the key principle and groundwork for relations between the people and the leaders whom they elect.
– But every coin has two sides. At a certain period, all achievements are linked to the leader but as time change, all the misfortunes may also be ascribed to him.
– Sure thing.
– And what’s next?
– As the saying goes, once you pledge, don’t hedge. One has to work.
– We see that Uralvagonzavod (Russia’s main manufacturer of tanks) is with you.
– It’s not one or another enterprise that matters.
The worst thing of all is to get enslaved by contemplation of one’s ratings – It’s a collective image.
– People who declared their position openly and put forward certain initiative appeared at Uralvagonzavod at some point. But were the enterprises few in number that got the assistance of the government that I headed during the crisis in 2008? The problem was actually bigger than our help or the system of effective measures, which we had devised and implemented. The Russian government and your most obedient servant never shunned responsibility. In late 2008, at one of the United Russia party’s public events I recalled the crisis of 1998 and said baldly, “We won’t admit it ever again, take my word!” This was a very risky statement. Putting responsibility of this kind on oneself without knowing all the components of the new crisis and controlling all the instruments that had sparked it and were developing it… But it was extremely important at that time to give members of the cabinet, administrative crews in the regions and, most importantly, the man in the street the feeling that the Russian leadership understood the situation and assessed it appropriately and had the clues to what was to be done. In such cases this is even more important than concrete actions. But our actions, too, were quite adequate to the state of things at the moment.
On Uralvagonzavod, the “fifth column,” “death-active” movies and monarchy
On renaming streets, the Ukrainian passport and oil prices plot
On Forbes list, corruption level and about who steals from whom
On friends, offences, attempts to sow discord and discomfort
On loneliness, daughters, personal environment and ability to say “No”
On low sense of danger, mistakes, opposite lane driving and philosopher Nikolay Berdyayev
On God, the absence of secret desires and the year of 2018