Another banker bites the dust….

A week after stunned Tribeca woke up to news of a grizzly death in which a Citigroup managing director living on Greenwich Street was found dead in his bathtub with a slashed throat and the lack of a suicide weapon on the scene suggesting there was foul play involved, another banking executive was killed over the weekend, when 54-year-old Melissa Millian, a senior vice president at MassMutual, was found lying in a road in Simsbury, Connecticut, having been stabbed in the chest.

As CBS reports, initially there was speculation Millian may have been in a bicycle accident, or may have been the victim of a hit-and-run.  However on Saturday, the office of the Chief State Medical examiner said the cause of her death was a stab wound to the chest, and the manner was homicide.
According to WCVB, Millan, a mother of two, was a senior vice president at MassMutual in Springfield. A spokesman for the company said she was a tremendous leader and deeply caring and that she would be missed.
Passing motorists found Millan lying on the ground Thursday at 8:04 p.m., according to Simsbury police.
Police said she could have been out jogging but that they did not yet know what happened and are investigating. Millan was taken to St. Francis Hospital where she died, according to police.
Police announced Saturday they were investigating the incident as a homicide.
As Breaking911 further adds, MassMutual was shocked by the news, with a company spokesperson saying that “Melissa’s tremendous leadership qualities, business acumen and deeply caring nature will be missed by those who had the opportunity to work with her.”

Friends, who gathered to pay their respects, said Millan was a dedicated athlete and an incredible mother.
“Devastated…shocked and angry. That a woman, such a woman’s life, could have been ended so senselessly and so cruelly,” said friend Lynne Tapper.

According to MassLive, people using the popular bike path that runs through the town said they were shocked to hear someone as stabbed to death along the trail which they consider safe.

The path is connected to a series of linked bikeways that start in Westfield and head south, running though most of Connecticut. It is popular with Western Massachusetts residents.

Sunday several people stopped at the memorial to mourn the death of the woman who was known as a triathlete as well as a parent and a skilled professional. They declined to talk to the media. A vigil was held earlier on Sunday in Farmington sponsored by Team Training New England.
The organization’s website called Millan an “an extraordinary human being” and set up a memorial page for her.
“Melissa has been a pillar of the TTNE community since she first trained with us in 2006. Regardless of her formidable responsibilities at home and at work, she made every effort to mentor ‘newbie’ triathletes and provide moral and other support to her team members year in and year out, without fail!” the website said.
People who use the path said it is well-lit and there are always people walking or driving by.
“I was very surprised,” said Donna Morris, of Simsbury, who was walking her four-month-old mixed breed dog at dusk Sunday. “I walk here sometimes and I haven’t had a problem.”
The path runs along Iron Horse Boulevard, a divided roadway with plenty of traffic. The memorial was set up less than 20 feet from a popular playground which was filled with children and their parents Sunday afternoon. Behind the playground is a dog park that is also popular. Across the street from the playground is a group of shops.
“It looks like someone would have seen something,” Morris said. Tonia Kagan, of West Hartford, reacted with shock when she learned the bouquets had been placed there to remember Millan.
“I love this path,” she said. “My husband is in the dog park now. It is a lovely place.” She likened Simsbury to West Hartford, saying it is usually peaceful and violence is rare.
“I use this path a lot and I’m shocked and surprised…I always feel very safe,” said Lucinda, who declined to give her last name.

Was this another targeted murder in an otherwise sleepy neighborhood, and if so, what was the motivation to take out a mother of two and active member of the local community? The police investigation is ongoing.
source » 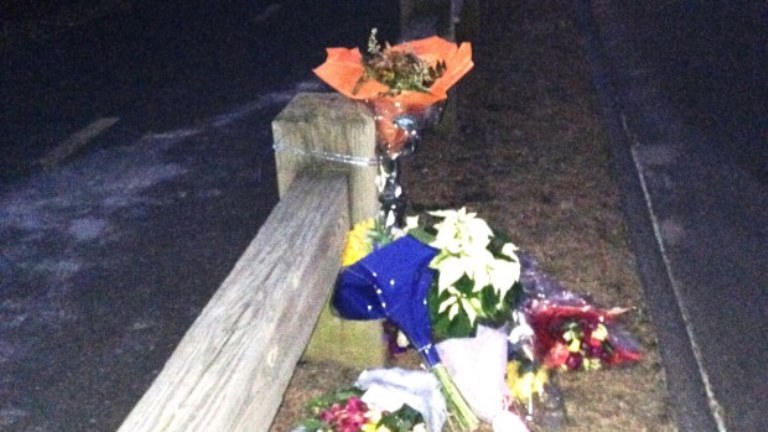